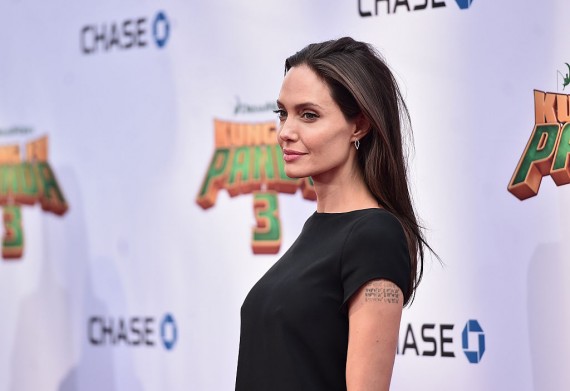 A nymphomaniac is a person who has abnormally excessive and uncontrollable sexual desire. This is applicable for both men and women.

The one topic that everybody wants to know - how good are these celebrities under the sheets? Most of the celebrities play certain roles to depict the script and the character they are trying to portray. There are some scenes that is sometimes over the line and needs some practice, especially romantic or sex scenes.

But what if I tell you that these celebrities don't need any practice when it comes to sex scenes. On this feature, I'll be giving out a list of celebrities who are known as sex addicts. Are you ready? Brace yourselves. Let us begin.

Okay let's be honest guys, we know she's the number one in our spot. The recently divorced actress is a nymphomaniac way back yester years. Even before she was married to Brad Pitt. Remember her ex-lover Jenny Shimizu? She claimed that Jolie has a collection of knives and she loves to use it under the sheets. How addicted was she? Well, when Jolie asked help to a therapist on his condition, together with his ex-husband Billy Bob Thornton, it was reported that during the therapy, they were getting it on.

The pop princess did it again. Yes, a self confessed sex addict. She was known to having a sex marathon with her ex-husband Kevin Federline. I don't know about you guys but a sex marathon while on a concert? No wonder she remained on the spotlight in the early 2000's, she had an unusual way to satisfy her cravings.

The former Disney Princess had its trouble prior to her real problems. Multiple reports said that the Mean Girl actress had trouble sleeping alone and wants to have somebody beside her always. She is considered touchy on the set and will make you do it with her in bed. She admitted herself that when she got nothing to do, she usually plays with herself. She doesn't even care what gender or age you are in. Asked Jack Nicholson.

The American Heiress is known for her sexual appetite. She's maybe the most versatile on our list when it comes to sex. She can do it almost anywhere and whoever. There's a reason why she has her own sex tape. And I'm not sure if that's the only sex tape she has since the only video released was ‘One Night In Paris'.

The sexy, sultry and seductive actress that even Collin Farrell can't resist. The former playboy supermodel has its share of fame prior to joining the house of bunny. She was already featured to a lot of music videos and joined Dr. Drew's Sex Rehab Show. How naughty was she? She can do it whenever you want and how long you want to do it. There's a reason why she was a playboy bunny after all. You can't just go to Mr. Hefner's house because you have a great body or great smile. You must know how to satisfy a man and we know she did. Great job Nicole!

Nicki Minaj Breaks Down Upon Meeting Her Idol Lauryn Hill

Nicki Minaj Breaks Down Upon Meeting Her Idol Lauryn Hill

Taylor Swift Will Give All Of The Remainder of $1.31 Million Pledge To Louisiana Flood Victims

Taylor Swift Will Give All Of The Remainder of $1.31 Million Pledge To Louisiana Flood Victims

Angelina Jolie And Brad Pitt’s Divorce On Hold, Here’s Why

Angelina Jolie is reportedly overwhelmed with her current situation that she is putting her divorce with husband Brad Pitt on hold to talk about things.

Angelina Jolie is reportedly getting lonely after her separation from husband Brad Pitt but good thing though that she has a lot on her hands to keep her busy and distracted.

Is Brad Pitt Back In The Dating Game? Angelina Jolie Is Not Yet Ready

Actor Brad Pitt has been seen with friends and noticeably happy since the split with his wife, Angelina Jolie, sparking rumors that the former might be getting ready to get back to the dating scene.