In just a few short years, ransomware has transformed from a nuisance into a national security threat capable of knocking out critical infrastructure like the Colonial pipeline. The attacks are no longer conducted by petty criminals trying to make a quick buck- it's suspected that rogue  nation-state level actors like Iran and North Korea may be backing ransomware gangs to raise money and hit their rivals.

Ransoms are Getting Bigger

There are more and more attacks all the time, but the size of ransoms is also on the rise. As time goes on, hackers are learning new tricks and finding new ways to make life miserable for all kinds of organizations, from major corporations to hospitals to universities and government agencies.

The more damage an attack causes, the bigger the cost for the victim, and the more the hackers can demand to make the problem go away. Hackers have become much more careful to quietly monitor networks and observe backup procedures, and encrypt backups so victims have no chance of recovering their data on their own.

Ransomware software is also continuously improving. Newer generation ransomware can encrypt files much more quickly, meaning it can lock down a bigger part of the network before cybersecurity teams realize what's happening and stop it. Hackers have also started to focus on victims that store sensitive data on their servers. The legal costs of a data leak can be enormous, so threatening to publish private data can scare many companies into paying a ransom.

According to research by ransomware rapid response team BeforeCrypt, the biggest ransom ever was paid by CNA Financial and topped $40 million dollars. This is far more than the two next largest known ransoms, which brought around $10 million each for the hackers. Most large ransoms seem to stay in the low millions, however. 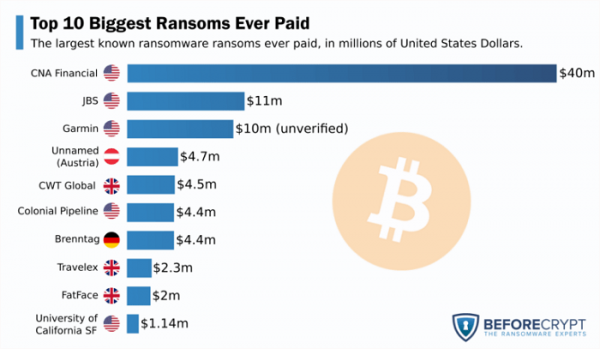 (Photo : Top 10 Biggest Ransomware Attacks Ever, and Why Ransomware Keeps Getting Worse)

One question going forward is how big these ransoms could get. If ransomware attackers keep upgrading their capabilities, they could potentially get bigger. However, it's likely that they would have to threaten more critical infrastructure to demand larger ransoms. This would likely lead to a backlash, as happened with the Colonial pipeline hack.

After the attack, it appears that the US government went after the gang responsible, taking down their infrastructure and recovering a portion of the ransom. If ransomware gangs get much more ambitious, there might also be political repercussions in the form of sanctions against the countries providing shelter to hackers.

In response, it appears that the gang involved in the attack shut down and decided to rebrand to try to escape the heat.

How to Protect Yourself

The growing size and scope of the ransomware crisis has many people worrying about what to do. Thankfully, there are a few simple steps you can take to dramatically reduce the risk of your network getting infected.

The first line of defense is to prevent hackers from gaining unauthorized access to your network. This can be accomplished by using strong passwords (especially on Remote Desktop Protocols) and 2 factor authentication. If you can afford it, a good next generation antivirus software and remote network monitoring can help to alert you of an infection and stop it. It's also important to regularly ensure that all software is updated with the latest updates and patches.

These measures are not foolproof, so it's also important to have a good backup strategy, including some form of regularly updated, air-gapped backup if possible. This can help to minimize downtime if you do get hit.

Next, you don't want hackers to be able to blackmail you by threatening to release sensitive data, so it's a good idea to encrypt all sensitive files. Finally, make sure that administrative privileges are only given to those users that absolutely need them, and conduct regular phishing awareness training so that employees will be aware of what kind of tricks ransomware hackers are likely to use.

Of course, the best option is to outsource security to experts, but these simple preventative measures can save you a lot of headaches.