Reflective surfaces will ruin all TV viewing experiences on the display of your television. You may optimize your environment so you shouldn't have to struggle with a sub-par session by investigating room illumination aspects that can impact the performance of Television watching.

While we delve into the specifics of illumination, it's essential to comprehend how visual illumination enters your vision.

watching television. The kind of display surface can have an impact on how effectively visuals enter your eye. In regards to decreasing reflections, the original display panel is favored above an extra glass covering.

Even though an extra glass layer helps shield the screen from dirt and smears and is easier to maintain, it helps heighten reflected light vulnerability. Certain LED/LCD TVs might include only the display panel or an extra glass layer, whereas Plasma Televisions often contain glass coverings above their highly reflecting display surfaces.

Furthermore, LED/LCD Televisions produce more light than OLED and Plasma Televisions thus. If your home is brilliantly lighted, an LED/LCD TV is usually favored, without any reflected light difficulties.

Another TV feature that could influence the visuals you view is if the television offers a flat or curved screen. In a highly lighted environment, curved display Televisions may bend the light which strikes the screen, leading to a negative viewing experience.

Graphics are viewed by multimedia projectors as a consequence of secondary light bouncing off a huge display. The displays could be lower than you want if the screen is doing a lousy task of reflecting light to the watching space. The quantity of light from the displayed image that enters your vision might be affected by light striking the screen from various points apart from the projectors.

Windows and bulbs are examples of unwelcome light providers.

Sunshine and nocturnal outdoor illumination elements can penetrate the Television or home theatre watching area and bounce off the television screen. Alternatively, visuals on a projector screen can be washed out.

Bulbs, as well as various sources of illumination in the area, could also be problematic. There is nothing more irritating than witnessing a lamp's shadow on a television display. Unless you switch the bulb off, the lighting position in a Television or projection watching room is crucial.  https://youtu.be/TPYKO5B9_gE

Curtains or drapes: Venetian shutters or drapes are an efficient approach to minimize undesirable light invading your space while movie projection or Television viewing, provided the television or home theatre space has windows. Dark-coloured shades and drapes, on the other hand, function well.

Effective Bulb Arrangement: If you possess bulbs in your home theatre or Television rooms, be sure they don't reflect off the TV screen. It is preferable to set the bulbs on both sides of the Television screen rather than in front of it in the house. While watching the Television or movie projector, switch off any bulbs in front of the display, like those near the sitting location. Similarly, if you possess wall/ceiling bulbs, ensure you maintain a dimmer mechanism built so you can adjust how much brightness they project into the space or into the television screen.

The home may be too gloomy at times.

Even though a space that is excessively bright or has distracting external illumination elements might create issues with Television or movie projector watching, an overly dark place could equally be a concern.

The darker the space, the finer for movie projections, although a highly gloomy or entirely dark area could be an issue for Television watching. A pitch-black room is not an issue for video projectors because you watch images mirrored off a highly huge monitor. Because the rays are reflected, it is gentler to your eyes.

When watching TV, though, it's more like staring straight at the supply of light, which can produce eye problems or migraines if you watch for lengthy amounts of time in a dim environment. You wouldn't want the area to be pitch black, just like you don't want illumination outlets (windows, bulbs) to beam into the house and generate undesirable projections off of the Television screen. 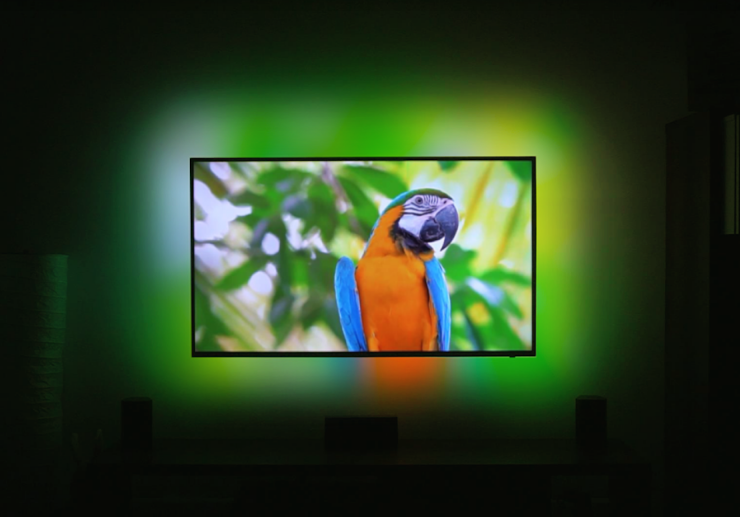 The AmbiVision technology for television is a creative technique to adjust the lighting in a Television or home theatre watching area, particularly when it comes to managing ambient darkness. It's a method in which an ambient illumination source is positioned behind the television and beams into a surface behind the screen.

AmbiVision operates with whatever Television show you're watching. The AmbiVision PRO captures each display, analyses the display borders, and delivers color features remotely to the LED strips on the rear of the TV due to the built-in cameras. The camera controller can be placed in a suitable location (maximum 5 meters distance). Via the fisheye optics, the controller may be placed next to the television, even higher than the display, or inverted on the ceiling. AmbiVision Pro links with the LED strips immediately and locates the LED strips on your display. The AmbiVision can be used with all screen sizes from 26-120 inches.

Getting a basic clip lamp and attaching it to the rear edge of the base that the television is set on is the most accessible approach to apply bias light, provided that your television is not wall fixed. Direct the light to the edges and top of the TV, bouncing off the walls. It is preferable to use an LED electric light rather than a CFL or Infrared lamp bulb since CFLs are incredibly bright.

A bias illumination package that connects to the backside of the television is another option that may be used with both mounted and stand-mounted Televisions. A band with numerous tiny Led bulbs and a remote is included in such LED decorative lighting packages.