After years of waiting, Hideo Kojima's new and upcoming game, Death Stranding, is finally coming for the Kojima fans, and further details are coming out weeks before the launch date, which would include the install size, an exclusive UK cover, and other features included in the game.

Based on a report by Games Radar, Best Buy has released a product listing for the game, and according to it, the install size will be 55GB, which may not be the biggest install size on PS4, but will still leave a substantial dent on your PS4's memory space.

However, it does not include the Day One patches yet as well as DLCs that will come in the future, so it's still a fairly modest install size.

And speaking of multiplayer, the listing also revealed that the multiplayer is "optional," but those who acquire it can get several online components, including allowing players to leave clues for each other, constructing buildings together, and a bunch of different ways to indirectly interact with the other players.

It is still unclear whether this means fans can play Death Stranding without subscribing to PS Plus, or they can simply ignore this multiplayer option altogether, or that they can opt not to install this section.

But, it will be good news for fans of the game that want to focus on Sam Bridges' story without worrying about the social stuff, especially when the story is a little confusing at this point without proper context.

With the imminent launch of the game, Kojima Productions has also announced the Death Stranding world tour starting on October 30 in Paris, then they will be going to London, Berlin, New York, San Francisco, Tokyo, Osaka, Singapore, Taipei, and finally in Seoul together with the head, Hideo Kojima.

#DeathStranding World Tour. Starting from Paris on 10/30, we will have an event in London, Berlin, NY, SF, Tokyo, Osaka, Singapore, Taipei, and Seoul! Looking forward to connecting with all the fans, together with Hideo Kojima! (details will be announced later for the tour) pic.twitter.com/XoazMuYPcs — Kojima Productions (@KojiPro2015_EN) October 9, 2019

No other details have been announced, especially about what will be shown on tour. But it's likely that Kojima will hold a panel discussion and probably answer a few questions about the game.

Death Stranding is an incredibly big game that it brought with it a Limited Edition PS4 Pro bundle and a now sold-out Collector's Edition.

Now, the game is bringing a surprise Limited Edition Higgs variant edition that is exclusively available on Amazon UK for £49.99. 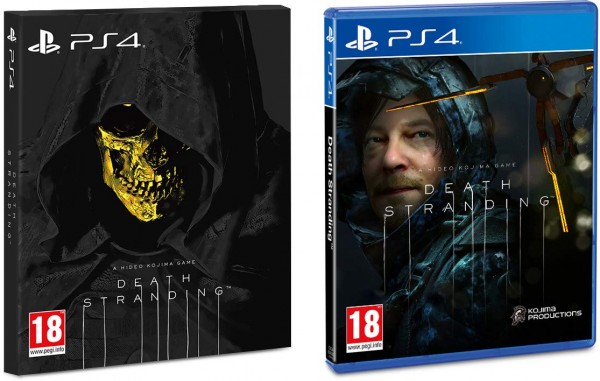 Although the version will not include any exclusive freebies or in-game extras, it does add a gloomy but cool coverslip featuring Higgs, the Death Stranding character with the golden mask, played by Troy Baker.

It's not the most special of version, but many fans agree that it does look cooler than the standard cover and that it won't be available on any stores other than Amazon UK.

If you wish to grab it, you can check the online eCommerce site and see if they can deliver straight to your country, or have a friend in the UK buy it for you and send it straight to you, which will likely make you spend more money, but at least you have the Limited Edition cover.

Death Stranding will finally be released on November 8 on PS4.