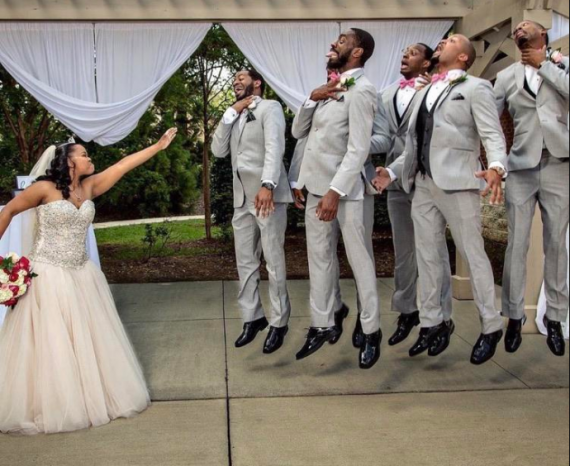 A recent post on Reddit shows a bride using "the force" and levitating the groomsmen making for quite an epic wedding photo. The picture is reenacted with quite the conviction which makes it pretty entertaining to look at.

This Star Wars trick photography has actually been a certain type of technique used by photographers for quite some time already. Star Wars has been a pop culture icon ever since it came out making sci-fi moves even more popular to those who weren't a fan of Star Trek.

One of the most memorable powers in the Star Wars franchise is the use of the force making heavy and sometimes almost immovable items, people, and surroundings move by using "the force" to control it. The franchise also has quite familiar scenes where the force is used to choke people even without laying a finger on them.

If you want to try out this levitation photography technique, here are a few tips:

Using a tripod is a great way to make sure that you will be able to perfectly capture the ideal scene you have in mind. Although you can take pictures manually by holding the camera, there are a lot of factors to bring in just to make sure that everything is symmetrical which could be quite of a hassle for the photographer.

Check out the weather

Although natural sunlight can be quite a plus when it comes to certain types of photography, for levitation photography, the shadows could be quite harsh to manage and would take a lot of work to fix post-photography.

A lower angle is a better angle to pick when it comes to levitation photography because it exaggerates the distance between your subject and the ground giving the "levitation" illusion even more life. Although the distance is exactly the same, shooting from a lower angle could really change how the entire photo would look like.

Get rid of obstacles

Emptying the background allows the viewers to focus on the subject itself instead of other distractions in the picture. If you want to capture the perfect levitation photo, you'll have to make sure that the focus is not just on your subject but also on the distance of your subject and the surface bellow creating the illusion.

Another hack would be to take several pictures and edit your subject into the image. Getting multiple photos include capturing the subject as well as the background in the exact same angle in order for you to be able to properly edit the image once you're done.

This trick is different from the other ones mentioned above because it relies more on editing compared to the actual jump.

Your subject should be positioned at a distance with the use of a chair, stool, ladder, or anything that helps them look elevated. Remove these obstacles when you are editing.

Read Also: How did the VHS Help Create One of the Best Horror Games on PC? Creative Assembly's Alien: Isolation is Selling at 95% Off for just $2!