‘Jumanji: The Next Level’ Is $200M Away From the Billion-Dollar Mark

There are only a few movies in history that have crossed the billion-dollar mark. And very soon, Jumanji: The Next Level will cross that line as they have already earned $800M worldwide.

Taking the reigns once again, the film stars Dwayne Johnson, Kevin Hart, Jack Black, and Karen Gillan, the film stands at $319.2M domestically and $480.9M at the international box office as noted by Deadline.

The movie from Columbia Pictures, Seven Bucks and Matt Tolmach Productions was first released in 18 international markets last December offshore before adding domestic and wider release the following weekend. Jumanji: The Next Level had the number one openings across Asia and Europe. 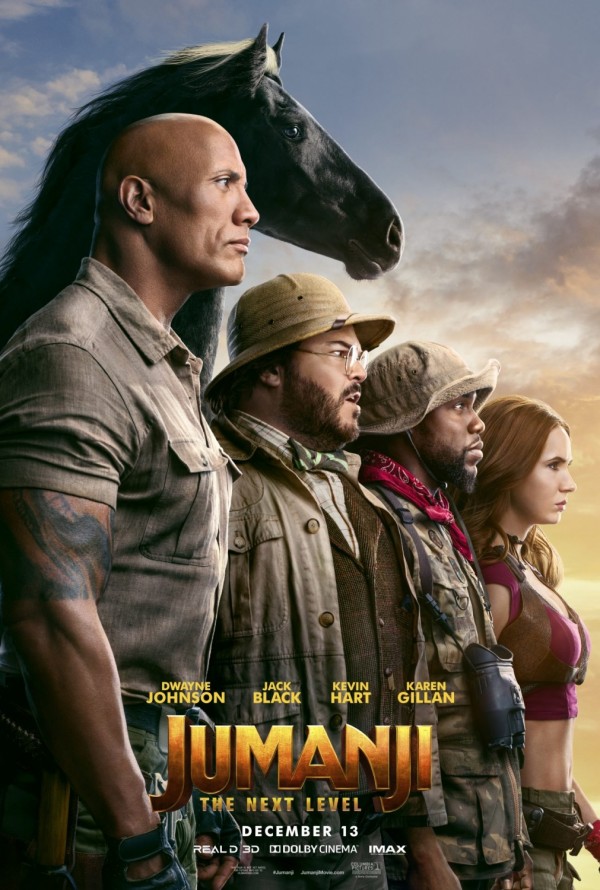 However, it still falls behind its predecessor, Jumanji: Welcome to the Jungle, which earned a whopping $404 million domestic and $962 million worldwide on a $90 million budget in late 2017/early 2018 in a report from Forbes.

Awards and Nominations for Jumanji: The Next Level

Although the film doesn't come close to being nominated for an Oscar, it has received many nominations since its release. Here are some of the nominations Jumanji: The Next Level received.

Read Also: First Look On 'Jumanji' 2017 Film: Cast Seen Shooting Inside A Jungle; New Movie Nothing Like The Original

You'd be surprised when you hear that the Jumanji franchise has already released 3 movies--the one in 1995 starring Robin Williams, and the next-generation movie starring Dwayne Johnson and the rest.

As of this writing, Jake Kasdan, the director has confirmed that the next franchise is in the early stages of development.

As for the plot of the movie, not a lot of details have been revealed yet other than the fact the upcoming sequel will feature a lot of adventures and twists now that the Jumanji game world has come into the real world.

Like the original movie which was released in 1995, Next Level also showed a flock of ostriches passing when Spencer & his team were having dinner. It is also anticipated that a new villain will be introduced in the plot.

Although it is widely believed that most celebrities would be way too good for games, there are actually a shocking amount of celebrities that are hardcore gamers! Check out these 6 celebrities gamers 2020 and the games they love!

The newly released "The Fate of the Furious" has awed fans with action-packed scenes that seemingly defied logic. A rumored end credits scene was allegedly taken off because of a fight between co-stars The Rock and Vin Diesel.

Kid's Choice Award 2017: The Biggest Winners In The Event; Who Got Slimed?

The Kid's Choice Award last Saturday was epic to say the least. Ghostbusters were the biggest winners of the show as the bagged 3 awards.

Dave Chappelle's New Stand Up Gig Announced By Netflix, The King Is Back In His Throne

Finally, after how many years, Dave Chappelle decided to make another show. The King Of Stand Up Comedy is back to reclaim his throne.

'The Fast And The Furious': The Fate Of The Furious, Why Dom Turns Evil

'The Fast And The Furious': The Fate Of The Furious, Why Dom Turns Evil