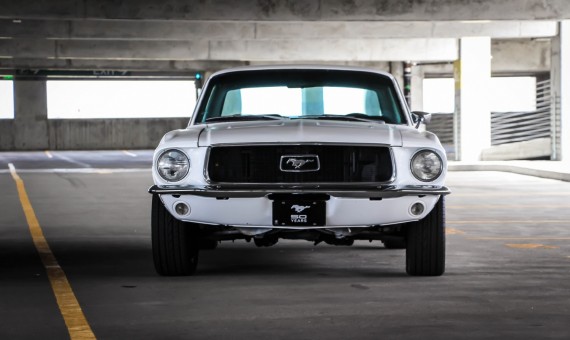 There's definitely no shortage of Ford Mustang models. Since 1964, Ford and his groundbreaking team of designers have gone to painstaking lengths to create countless models of this iconic sports car. One model in particular that made a name for itself is the 1967 Shelby GT500. This Mustang model was the brainchild of none other than Carroll Shelby. A former World War II flight instructor and professional race car driver, Shelby partnered up with Henry Ford to make history and transform the very first Mustang into the American sports car prototype. That said, if you know anything about Ford Mustangs, then you know that the 1967 Shelby GT500 wasn't the first Shelby/Ford collaboration. First came the 1965 Shelby Mustang GT350, a high-performance take on the traditional Mustang and a true game-changer for both men. Riding the success of the previous Shelby-designed vehicles, Shelby and Ford decided to create the 1967 Shelby GT500.

How the GT500 Differed From Its Predecessors

In comparison, the Shelby GT500 was an improvement in terms of overall performance and power. This particular model allowed Shelby to take all the lessons he had learned from previous Mustangs and create the perfect blend of muscle and sport. The GT500 had the high performance that everyone came to expect from a Shelby racer, but now had a more powerful engine and was more user-friendly. In particular, the new 1967 GT500 included a reworked 428 CID engine or "Police Interceptor," which was a first. Generally, such a powerful engine was reserved for bigger vehicles. Shelby also added the cast-aluminum mid-rise intake manifold, the twin 600-cfm Holley 4-barrel carburetors, a 4-speed manual or 3-speed automatic transmission, and a handful of other innovative upgrades (GT-level interior trim, power steering, and air conditioning, to name a few). At the time, this vehicle's base price was $4,195. Better still, a few early models of 1967 GT500 receive the 427 CID V-8, making them practically race-ready, though the validity of this fact is still up for debate.

In general, this particular engine was a breath of fresh air for the muscle car. Also known as the Cammer, the 427 has been herald as Ford's answer to more powerful engines like the Hemi. Moreover, this particular high-performance engine can generate anywhere from 616 to 657 horsepower with the right equipment. As a result, it shouldn't be a shock that the 427 CID engine has made its way onto most people's top ten lists. In fact, this engine was once so legendary that it was forever banned by NASCAR. Furthermore, despite being prohibited, this powerful engine still managed to make its way into some of the top drag racing vehicles in the early 1970s. Sadly, this engine was later discontinued, but the 427 did pave the way for other Ford engines that provided superior performance.

A later version of the 1967 Shelby GT500 was none other than the 1968 GT500KR. Here, KR stood for the "King of the Road." This GT500 variant was equipped with a 428 CID Cobra Jet V-8, which provided a modest 335 horsepower. Obviously, this engine's horsepower was nowhere near that of the 427 engine, yet what made this engine stand out was its decent amount of power and torque. Plus, true to form, upon its 40th anniversary, Ford released a 2008 commemorative limited edition GT500KR that had a 5.4 L supercharged V-8, which produced an impressive 540 horsepower.

Both these incredible Shelby Mustangs left an impression. However, by 1969, unfavorable tweaks/improvements, combined with less involvement from Shelby in the overall design, led many people astray from the 1969 and subsequent models. Furthermore, in the summer of 1969, Ford and Shelby officially parted ways, and any remaining models were sold overseas. That said, there were a handful of 1971 and 1972 GT500 models (better known as Shelby Europas), but they were sold exclusively in Europe. Consequently, by the end of 1972, it appeared as though the Shelby GT500 had officially been put to bed. Of course, like any Ford vehicle, however, there's always a strong likelihood a once loved favorite will return. Thus, when the GT500 resurfaced in 2007 for a couple of years, not too many were shocked.

The 2007-2009 GT500 paid homage to its first edition in overall look and design. In fact, Ford teamed back up with Shelby to truly do this beloved Mustang model justice. One truly amazing byproduct of getting the band back together was that these models featured a Tremec 6060 transmission, which paired exceptionally well with the modular 5.4 L engine these vehicles now had. Nevertheless, this GT500 revival was short-lived, and only 20,000 or so of these newer models were produced.

The 2010 Shelby GT500 possessed even more horsepower than years' past and was raining champion until 2013. Clearly, the designers at Ford were a little obsessed with creating a version of the GT500 that had as much horsepower as possible. Thus, when the 2013-2014 GT500 was unveiled, it didn't come as a surprise that this Mustang model was capable of producing 662 horsepower with 631 lb-ft. of torque. Nevertheless, after blowing consumers' minds with an insane amount of power, the GT500 was once again put back on the shelf for another day and more horsepower.

Though the Shelby GT500 Super Snake standard version didn't necessarily offer more horsepower, its 2014 upgrades and supercharger did. With aftermarket upgrades like a driveshaft and throttle body, the Super Snake promises a max of 750 horsepower. Thus, up until this point, Ford Motor Company has appeared to outdo itself once again, and this statement holds even now. Though, there is, of course, a 2020 GT500 that's said to be capable of producing a minimum of 760 horsepower. Better still, the 2020 GT500 is rumored to have a cross-plane crankshaft variation of the Voodoo engine, which Ford has proudly named the Predator. This new Predator engine is a first-generation model, though it's similar to several versions of the Ford Coyote engine. Overall, this 2020 engine promises 760 horsepower, 625 lb-ft. of torque, and the ability to go from 0 to 60 mph in under three seconds.

Now, you have a better understanding of how far the 1967 Shelby GT500 Mustang has come. You might feel like it's somewhat difficult to revel in the classic. But then, the truth is no matter how much horsepower is being promised in 2020, there's just something special about the original 1967 model. Not only is 1967 GT500 an oldie but a goodie, it's also extremely valuable. In fact, original 1967 models have been sold for $1.3 million or more, especially rare Mustang types like the Shelby GT500 Super Snake. But then, you don't have to take our word for it. Just watch Gone in 60 seconds, the Eleanor Mustang is none other than a Shelby GT500. Therefore, it's safe to say that if they are making blockbuster hits about how rare and priceless this car is, there might just be something to it.

That said, if you don't have a cool $1.3 million saved up or available to spend on a vintage sports car, but have always wanted your very own Eleanor, you can have one custom built. These stunning Mustangs are truly a prized possession worth having, so practice a little self-care or self-indulgence, and check out what Revology has to offer. All you have to do is visit this page, and you can start building your beloved Eleanor or classic 1967 Shelby GT500 Mustang today.

If you do decide to build your fantasy Mustang, you have amazing custom features to choose from, including a variety of vintage and contemporary colors. You can also select the color of your LeMans Stripes. In terms of overall specs, you can pick out your wheels, hood fasters, interior colors, trim panels, instruments, and so much more. Other customizable features worth mentioning are the carpeting, steering wheel, head restraints, and auto interface (touch screen display, reverse camera, stereo system, and so on).

Ultimately, having a vintage Mustang built is a great option for so many reasons. For many people, a rebuilt classic is the way to go because they get to enjoy an iconic/classic vehicle without compromising on important features, contemporary specs, and safety options. Think about it, though a coveted collector's car, the first generation Mustangs weren't perfect, especially not by today's standards/regulations. Many proud vintage Mustang owners agree that things like sloppy steering, overheating issues, poor fuel economy, frozen door locks, and loud cabin noises hinder their enjoyment. Similarly, poor exterior lighting, old technology, and inadequate sound systems have negative effects on the overall driving experience. Thus, a customized classic is generally the best way to go if you want to get some use out of your vintage Mustang.