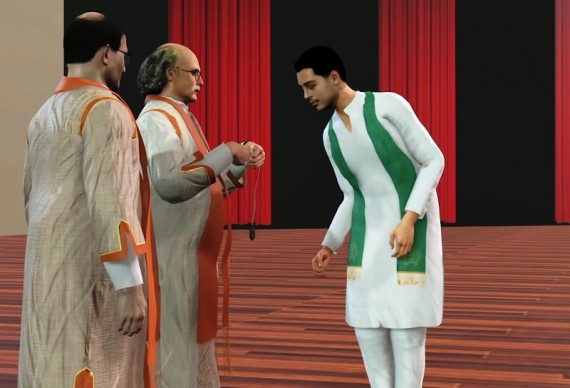 An Indian institute used avatars for their graduation ceremony.

A lot has changed in the way we do things since the pandemic. that includes graduation ceremonies. Many institutions had to hold virtual ceremonies so that everyone stays safe.

This year, the Indian Insitute of Technology embraced this new normal. They decided to hold their 58th Convocation online. However, what makes the ceremony unique is that they used VR technology to award the degrees to the graduates.

It was indeed a unique ceremony. The VR convocation offered something the world probably haven't witnessed before. It saw the graduates walking across the stage and receiving the diploma in their virtual form. Through the avatars, graduates also socialized, played games, and roamed the virtual campus.

How did they make VR convocation possible?

Each of the graduates, faculty, member, and speaker were provided with their own avatar. To make the VR ceremony possible, each graduating student had to submit a good quality photo. They then need to install an app and verify their information. Closed to the day of the convocation, they were asked to download their personal avatar. Students who were scheduled to receive medals got to see themselves receive it from the chief guest.

However, a graduation ceremony is also a social event. Thus, the school also put up a VP or virtual presence. VP allowed the graduates to enter the virtual campus and socialize with other virtual participants. They saw themselves as cartoon characters and able to see others moving around the virtual platform. They then got to interact through a video conference, movie, game, and other activities. Even their parents got to join the virtual convo.

The ceremony was broadcast on two local TV channels. It was also streamed on YouTube and Facebook Live. There were 2,186 graduates all in all.

VR-convocation is the best option to avoid risking participants' health

Director Prof. Subhasis Chaudhuri said the institute thought it best to arrange a VR-convocation. This way, they don't put the graduate's health at risk. Still, the ceremony provided them a sense of achievement and pride.

The ceremony saw Prof. Duncan Haldane's avatar handing the medals to the awardees. Among the awardees include Sahil Shahl; he received the 'President of India Medal.' Sahil said that he was overwhelmed seeing his avatar receive the medal. He said he was both nostalgic and disappointed to see this chapter in his life come to an end suddenly.

Even India's Prime Minister Narendra Modi tweeted about the unique event. In his twitter post, he wrote, "Wonderful mix of tradition and technology!" He called it an interesting convocation and commended them for a great effort.

Wonderful mix of tradition and technology! An interesting convocation at @iitbombay. Great effort. Congrats to the Class of 2020! I fondly recall my visit to this brilliant institution for the convocation in August 2018. https://t.co/cq8eJt9KeJ — Narendra Modi (@narendramodi) August 25, 2020

It was a massive achievement indeed for the university. The amount of effort and hard work put in to create the avatars is truly commendable. As we continue to adapt to the new normal, VR ceremonies such as this is the closest we could to the fun and drama of traditional graduation rites.