Lumia 1520 leaks online, poses alongside an iPhone and another Lumia 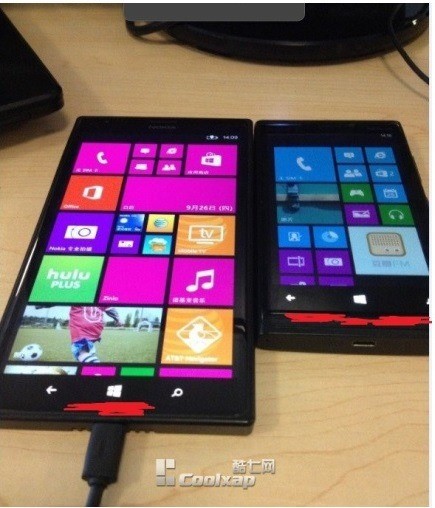 Lumia 1520 next to another Lumia (Photo : CoolXap)

The countdown to Nokia's Oct. 22 event in Abu Dhabi has begun and as the date draws nearer, leaks and rumors pertaining to the Lumia 1520 are gathering momentum.

Leaked images of the Lumia 1520 have been surfacing online frequently and now images of Nokia's first-ever phablet have popped up online, which show the impending smartphone posing alongside another Lumia and an iPhone.

The latest images come courtesy of Chinese tech forum CoolXap and reaffirm that the Lumia 1520 will come with the General Distribution Release 3 (GDR3) aka Lumia Bittersweet Shimmer update.

"Couple of more live photos of Nokia's upcoming 6-inch Phablet Lumia 1520 sitting next to another Lumia, and an iPhone, leaked today on a Chinese tech forum CoolXap," reports Symbiantweet.

This, however, is not the first time that images of the Lumia 1520, dubbed the Bandit, have leaked online. A few days ago, we reported that a press render of the purported phablet had emerged online. The leaked image was courtesy of noted tipster @evleaks, who revealed the Lumia 1520 in a red avatar via a Twitter post.

For the uninitiated, the Lumia 1520 is speculated to tout a 6-inch 1080p display with FHD resolution. The super-sized  smartphone will likely be the first device to boast GDR3 and could be an AT&T exclusive in the U.S. However, Verizon is also expected to get the WP8 smartphone and its variant will likely be called the Lumia 929.

Under the hood, the Lumia 1520 is rumored to house a quad-core Snapdragon 800 processor. It will also tout 32GB of on-board storage and a massive 3,400 mAh battery. The phablet will likely feature a 20-megapixel PureView primary camera with a six-element optical image stabilization (OIS) lens.

The Lumia 1520 is expected to come in four colors - red, black, white and yellow - and the phablet is expected to sport a price tag of $700 off-contract.

Nokia is gearing up to launch six new devices at its Innovation Reinvented event on Oct. 22, including the Lumia 1520. It remains to be seen if the first-ever WP8 phablet can give sleepless nights to rivals.

A press render of the Nokia Lumia 1520 has leaked in a red avatar.

An image of the Nokia Lumia 929 has leaked and it suggests that the handset may head to Verizon.

The October timeframe for the launch of the Nokia Lumia 1520 and Nokia Sirius tablet has been reaffirmed by a trusted source in the tech community.

According to reports, the World-Check, a financial crime database used by banks, has been exposed online.