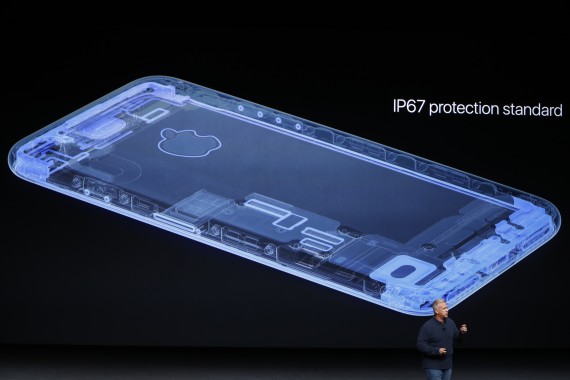 It was a big day for Apple today as they launched their newest flagship and more. But what else took place at the event aside from the iPhone 7 Launch? (Photo : Stephen Lam/Getty Images)

Today was a big day for Apple as it launched its much awaited flagship, the iPhone 7. While the iPhone 7 was anticipated, Apple brought so much more than that during the event.

The news about Apple killing the headphone jack in the iPhone 7 is real. It also introduced their newest color variation and it was beautiful. Apple discussed all of the iPhone 7's newest features, the Apple watch series 2, the newest iPhone operating system and more details about the macOS Sierra.

So the iPhone 7 is finally here and it has new features that would either please you or displease you. Topping the list of its newest feature that Apple fans already know is the missing headphone jack. So the iPhone 7 lost the headphone jack, but it gained the new wireless "AirPod" earbuds. This feature is actually very helpful especially if you hate it when the headphone wires get all tangled up. That's a win for Apple right there.

Jonathan Ive, Apple's Chief Design Officer, says that they did everything they can to design the iPhone 7 to be as clean and beautiful as it can possibly be. Apple's newest flagships came in the usual array of colors, but added the glossy piano black and jet black in matte. While both the iPhone 7 and iPhone 7 Plus comes with a wider color gamut that allows it to manage and reproduce better colors, the screen display is also 25 percent brighter than it used to.

The iPhone 7 will be equipped with a brand new A10 Fusion chip. Its Antennas are built right into the chassis and they will be integrated with internal stereo speakers. Now, you don't have to worry about your iPhone getting wet or dirty because both devices are dust and water-resistant. If these does not seem like that much of a deal, let's skip ahead to the big changes.

But Miyamoto stated that we can play it with one hand wherever we are. It also offers multiplayer modes so we can compete with other players from the other side of the world. The Super Mario Run will come out by the holiday and exclusively for iOS.

Apple's newest flagship is equipped with two rear-facing cameras. This allows iPhone 7Plus users to choose whether they want to take a photo using the wide-angle setting or a telephoto lens. It also features two different focal lengths: the software zoom and the depth.

The software zoom allows you to zoom in the camera app between and beyond the different focal lengths while the depth allows you to blur the background and focus on your subject. The regular iPhone 7 got some camera upgrades compared to the iPhone 6S shooter.

Its camera has a 12-megapixel sensor, an f1.8 lens and a new flash. Apple also says that the iPhone 7 comes with optical image stabilization and a new image processor.

The new iPhone 7's home button will be functioning like Apple's new MacBook trackpads. The Taptic Engine will provide touch feedback similar with custom notification buzzes when we get messages and calls.

The Apple Watch Series 2 Introduced At The September 7 Event

Apple launched the second generation of the Apple watch. The Apple Watch Series 2 got some spec bumps that's guaranteed to be way better and different than its predecessor. Apple's latest watch is equipped with a new S2 chip and has a dual core processor which makes it faster than the first Apple watch that was released last year. Its screen is the brightest and its encased in white ceramic and its square shaped aluminum and stainless steel.

Just because the Apple Watch Series 2 is out and about, it doesn't mean that the series one line is going to be taken out of the picture. Forbes reports, the Original Apple Watch is still going to be available as the cheaper alternative as the Series 2 will be sold at $369. Although, if you fancy the series one line but you want to upgrade the processor - it is possible and the first Apple watch with the S2 chip will cost $269.

While the original Apple Watch was splash proof, the Series 2 Watch is not. However, it is even better because it's waterproof up to 50m. You can even wear it while swimming without having to worry about the watch's speaker. Every possible point of entry has been sealed off solely for the purpose of pushing water out. It isn't just swimmer friendly, the Apple Watch Series 2 has built-in GPS that can help hikers and runners find their way home if ever they get stuck in a cellular dead zone.

Say Hello To iOS 10 Next Week

Tuesday, September 13 - iOS 10 is officially coming out and it comes with major updates for users who have been using the beta version. iOS 10 will be bringing more widgets, better notifications, Siri is smarter and can now transcribe voicemails and do image searches plus the iMessage is now open to developers. The iOS 10 will also include a universal clipboard where the text you copied from your phone, you can paste to your Macbook.

The macOS Sierra was not mentioned in today's keynote, but you can expect Sierra to launch on September 20. Sierra is going to replace the old OS X and she is bringing a friend along with her. According to CBS News, Siri is coming to the Mac now and you can access files and emails using voice commands. Transferring files from your iPhone to the Mac won't be that difficult anymore. Sierra has improved continuity that lets us transfer files back and forth from our Mac to the iPhone.

Apple announced that it will discontinue the iPhone 5S, iPhone 6 and iPhone 6 Plus.

The iPhone 7 is currently being compared with competitors' flagship releases, one of which is the Samsung Galaxy Note 7. The Note 7 beats Apple in different aspects but the iPhone 7 is very impressive too.

iPhone 7, iPhone 7 Plus vs iPhone 6S, iPhone 6S Plus: Why You Shouldn't Upgrade Just Yet

The issue leading up to the iPhone 7 launch was always about the improvements to be made above the iPhone 6S series. And with the official release of the new flagship, the public can now make logical assumptions.

The Apple Watch 2 was also released during the company’s September 7 event. In true Apple fashion, it has widely opened what a smartwatch is capable of.

Apple unveiled its flagship iPhone 7 and iPhone 7 Plus on Wednesday, Sept. 7, at an event in San Francisco, Calif.

What Could Save Apple: The iPhone 7's Necessary Innovations

The upcoming unveiling of the iPhone 7 is imminent and tantamount to the future success of Apple. But with all the negative press, what exactly does the tech giant need to move up again?

Rumors about the iPhone 7 features and specs are everywhere. One always pops out after another. It makes us wonder what's up, Apple?

The rumored Surface Phone from Microsoft has very ambitious specs. It may also be Continuum-enabled and come with an uncompromising set of cameras.