What's The Deal With VR Backpacks? 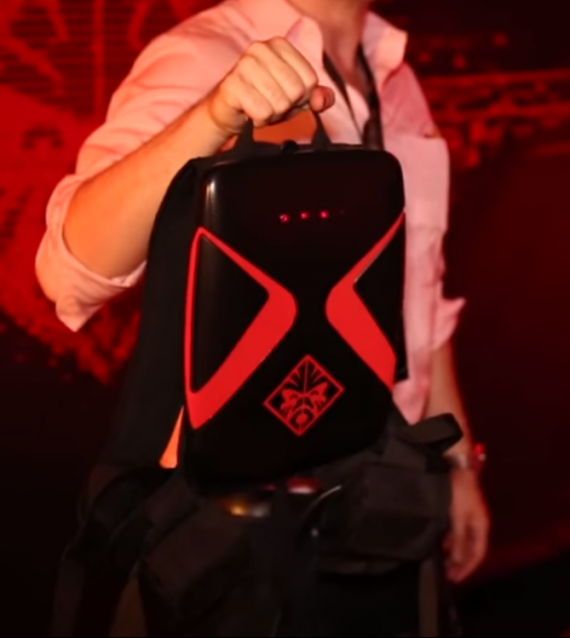 Not long ago, virtual reality became a thing. It was very innovative. The new tech is being used in education, military, medical training, entertainment and just about everything in everyday life. In gaming, it was a big hit.

However, there's an obvious flaw: VR tech is limited by space. This led to a new trend, namely VR backpacks.

The Emergence Of VR Backpacks

People find virtual reality cool. It takes one's gaming experience on a whole another level. However, it can also be frustrating. The culprit behind this is that VR machines seem to be tethered to a PC and it's connected to many cables.

The first one limits the range of a gamer. The latter might cause him/her to trip over. Thus, making it uncomfortable for the player.

Does VR need to be wired? Tech companies have yet to develop a completely wireless virtual reality unit. As of now, tech firms are still trying to solve or overcome VR tech's limitations. However, it is not that simple. There's a significant reason why it has to be tethered.

Digital Trends explains that virtual reality is still very dependent on latency. There is a crucial sync in the timing. The frame generated by the graphics card should reach your eyeballs in no more than a few milliseconds.

VR tech should correspond to the reproduction of your real actions into the virtual world. Otherwise, the person will experience disconnection and nausea. Tech companies are not willing to risk this by using wireless connections.

The HTC Vive is an example. According to VRHeads, it requires lightning-fast latency. This is to ensure that the VR experience is nausea-free. As such, the tethering cables are needed to transfer data. Otherwise, there will be no communication between the PC and the headset.

Valve's Chet Faliszek spoke at the Mobile World Congress earlier this year. He said that it's possible. The headset could use beams, like with microwaves. However, the user's head will also be included. Unfortunately, that would be dangerous.

But AMD and Google are said to be working on wireless headsets. The Oculus Rift CV2 and HTC Vive could soon be untethered from a PC. That will still take some, though. Until then, VR backpacks seem to be a good compromise.

VR backpacks have emerged to solve the tethered connections and cables. Tech companies want consumers to use have an easy time with VR tech. Gamers have also requested for a more comfortable and portable virtual reality experience.

The Appeal Of VR Backpacks

VR backpacks appeal lies on its portability. It's an on-the-go virtual reality experience. It allows a wider scale to work on. Users don't have to be limited by the tethered connections.

It makes VR gaming more enjoyable. They don't have to be contained in a certain space. There would be no cables that normally cause people to trip. Thus, lessening the possibility of being hurt.

The VR backpacks offer the same comfort. They are also equipped with Nvidia GTX 980 graphics cards and Intel Core i7 CPUs. Since they're portable, they are powered by batteries. However, there are still differences.

The HP Omen X VR PC Pack also uses Intel Core i5. It has 32 GB of RAM and 512 GB solid-state storage, according to ZDNet. Its pair of batteries will let it run for roughly an hour. The catch here is they are swappable. So far, Omen's design is the most refined.

The Omen will be compatible with the HTC Vive headset. It is also capable of supporting other headsets. However, it is currently only a developer's tool ad not yet a commercial product. That might happen in the future, though.

According to the Digital Trends, the MSI's Backpack PC looks different from the average portable gaming system. It has a pair of straps on its rear. This is not present in HP's Omen and Zotac's VR Backpack. It is estimated to weigh around 12 pounds. Both Zotac and MSI offers an hour and a half to two hours of play time.

The XMG Walker VR Backpack is the first one to be shipped this year. The other VR backpacks mentioned above have no concrete pricing or launch dates. This is according to Mashable. It will cost around $5,353.

It weighs around seven pounds. It is specifically powered by an Intel Core i7-67000 HQ processor. It uses the Nvidia GTX 1070 graphics card. The Walker has up to 32 GB of DDR4 RAM. It can hold two solid-state drives. It is equipped with HDMI, DisplayPort, 6 USB ports and an Ethernet port.

VR Backpacks And Their Drawbacks

There are two drawbacks for VR backpacks, but they might not be enough to hamper its trend now. VR in itself is already expensive. Naturally, the price of VR backpacks will be even higher. Consumers may be willing to spend that much.

Though the most pressing issue is actually the battery. It puts the limit to VR play time. Zotac's 60,000mAh cell will allow it to run in two hours. The Walker's two huge block batteries offer only 60 minutes. Compare that to the four hours life span for the HTC Vive's controllers.

However, the batteries can be switched out with charged ones.

Eventually, it really is the costumer's choice. They might not find the drawbacks of VR backpacks as problematic enough. In fact, they will dismiss these over its portability.

The VR backpacks seem to be more an asset to virtual reality. Only time will tell. It might be displaced soon when a wireless VR is already available.

The coming Google Pixel and Pixel XL might have Android Nougat 7.1 as its OS.

The Killer E2500 NIC offers better gaming connection for PC players and would be on MSI and Gigabyte motherboards.

A student from the Netherlands has found that an app on Xiaomi smartphones, such as the Xiaomi Mi4, can carry potential spyware.