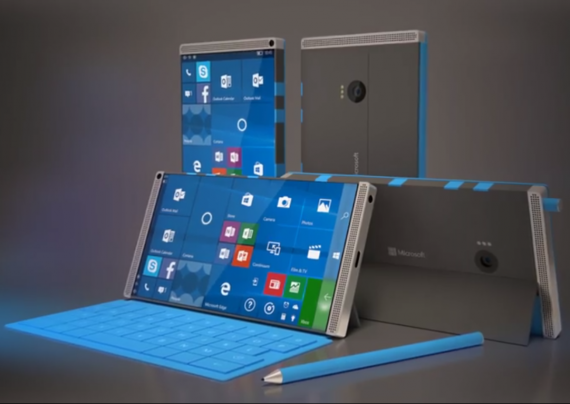 There have been many rumors about the new Microsoft Surface Phone. Though nothing yet has been confirmed. Perhaps the most exciting news is its leaked patent. It may just directly compete with Samsung's Galaxy Note line.

Some reports say that the Surface Phone will have a detachable keyboard. According to the Christian Post, this is in line with Microsoft's aim for the Surface Phone. It will be a fully pledged all-in-one and portable productivity device.

Additionally, a Surface Pen might be included as a peripheral device for the phone. The stylus will offer a more precise input method.

The report suggests that the Surface Phone could gain decent recognition in the smartphone market. This will be the case if the device is released today. Microsoft can take advantage of Samsung's current Galaxy Note 7 tainted reputation.

The display size for the consumer model could be 5.5 inches. It could reach up to 6 inches for the business model. Christian Post further states that it will use the AMOLED display technology. The quality of display depends on the model. The base will be at least Full HD. The high end will be in Quad HD.

It will be powered bu either the Snapdragon 821 or 830 processor. It might have an 8 GB of RAM. The storage could be 64 GB and more. The Surface Phone will most likely have a 21-megapixel rear camera and an 8-megapixel front camera.

The phone will be running on Windows 10. It will also have the Continuum feature. This will allow users to extend their device to a monitor and other peripherals.

However, people have been most excited about the leaked patent for the phone. Apparently, Microsoft had filed a patent application in February 2015. It was published on Aug. 10, 2016. According to Tech Times, it indicates an innovative fingerprint scanner.

The said technology is called "Fingerprint Detection with Transparent Cover". The leaked copy states that the Surface Phone has a transparent cover and a light source disposed at an edge of the said cover. It also includes a filter disposed along the transparent cover.

Microsoft could possibly launch the Surface Phone in October. According to reports, the company may be hosting an event for the phone that month.

The Micosoft Surface Phone might still be unconfirmed, but certain clues point out to its existence.

The various Microsoft Surface products have made a name in the tech industry as some of the most reliable and easy to use items. There is question why the public is so excited to hear about the Microsoft Surface Phone.