Galaxy Note 7 Stops Production: Why This Is The Best Move For Samsung 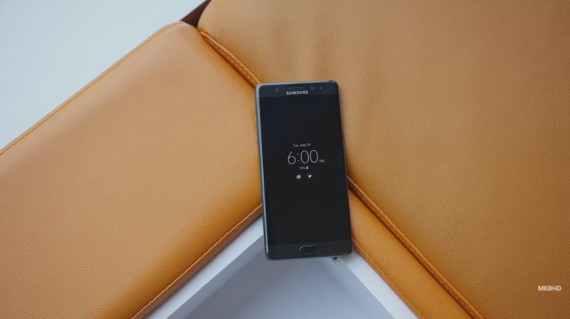 Due to various reports of replacement Galaxy Note 7 units still exploding, Samsung has opted to withdraw the line entirely from the smartphone market. (Photo : Marques Brownlee/YouTube)

Samsung has been under a very watchful eye in the last few weeks due to reports that various units of its Galaxy Note 7 line have been exploding. When these reports first came out, the company opted for a recall that cost it millions. However, there have been numerous claims that even the replacement units are unsafe and still go up in flames. The Korean tech giant has since deviced to just withdraw the line of devices from the market permanently.

When news of the Samsung Galaxy Note 7 first came out, the tech world was thrilled and excited. Even before it was officially unveiled, it was already being hailed as 2016's best smartphone - a difficult task, as the year has seen the best releases from various companies. And when the handheld eventually was released, it met, if not exceeded, all expectations.

That is, until reports started making headlines that the Note 7 was exploding. What was first thought to be an isolated incident was suddenly happening over and over. What's more, there was a possible explanation: The lithium ion batteries were too packed with power to hold out with its size.

Then Samsung decided to recall all its released units and fix the issue. It reportedly cost the company millions, but the possible payoff was still a larger sum. There was a lot of pressure, however, as the company not only had to repair the device, but also had to work quickly in order to minimize any backlash on its name.

The reall was finished some days ago as new units were handed out. But soon after, explosion reports were again gracing headlines for these replacement units. Various telecommunication carriers announced they would not carry the device anymore and Samsung has followed with a statement that said production of the device will cease altogether.

"We recently readjusted the production volume for thorough investigation and quality control, but putting consumer safety as top priority, we have reached a final decision to halt production of Galaxy Note 7s," BBC quotes the company saying. "For the benefit of consumers' safety, we stopped sales and exchanges of the Galaxy Note 7 and have consequently decided to stop production."

This press release caps off around two months of bad press for Samsung, which resulted in a beating from investors and safety regulators. Arguably more important, the company has lost the faith of its consumers. Furthermore, this gives Apple a relatively clear run until the end of the year.

The move was unprecedented and almost unheard of, but it was a necessary one to make. "They made a really intelligent, hard choice that saved their brand and prevented what could have been a complete melting down of all the goodwill they had built over the last five years," Eric Schiffer, chairman of Reputation Management Consultants told The New York Times.

Because Samsung never released an official statement as to why the Galaxy Note 7 units were exploding, it could be said that the company has not completely figured out what is wrong with it. As such, continuing to force the handheld in the market might only be more detrimental to the brand.

For now, Samsung can still ride on the success and beauty of the Galaxy S7 and Galaxy S7 Edge, which has not been completely overshadowed by the bad press of the Note 7. As such, there is still time to dust off and climb again.

Another Apple iPhone Explodes Due To Battery Life Issues

In what could be the decline of Apple, another user has claimed his unit exploded spontaneously. Furthermore, it has again been proven that Apple’s battery life is inferior to its competition.

The ongoing recall of all Samsung Galaxy Note 7 units is costing the Korean tech giant plenty of money and a large dip in market standing.