Who Is Going To Win Artificial Intelligence Race? 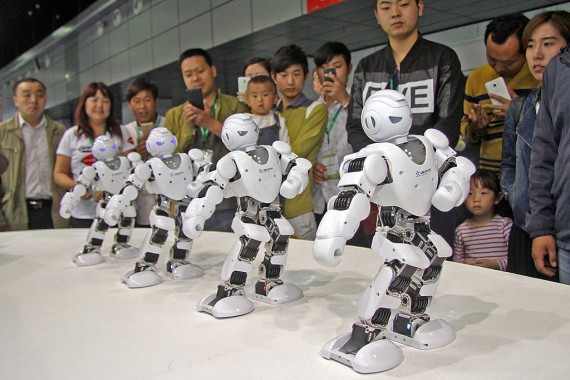 Major companies in the tech industry are racing to implement artificial intelligence technology into smartphones and other internet-linked devices in order to make them think like people.

CBS News reports that artificial intelligence (AI) projects at Carnegie Mellon aim to bring this emerging technology closed to our daily life. F0r instance, the CMU Highly Intelligent Mobile Platform is a robot designed to perform dangerous tasks in situations that would put humans in too much risk, such as the 2011 disaster in Japan, at the Fukushima nuclear plant. Because CHIMP is designed to be able to work independently in disastrous conditions, it needs both mental and manual good skills.

AI researchers and the experts in robotics still have a lot to do before artificial intelligence applications will bring self-awareness. Tech analysts do not expect that artificial intelligence technology and robots will replace humans soon, as many of these AI apps are still in their infancy. For now, gripping and picking up a cup of coffee is still a difficult task for a robot, as the biggest challenge for robots is mastering human dexterity.

Artificial intelligence has the potential to lead to a new technological revolution and to help us live a safer, more secure existence. The advancing in computing allows now users to interact with machines in natural language for tasks such as searching for information, making restaurant reservations, checking traffic or ordering goods. The AI technology implemented in these programs tries to create a world in which everyone can have a virtual assistant.

Venture Beat reports that the Obama administration concluded in a study of the potential impact of artificial intelligence that this emerging technology is evolving fast, holding great promise but also requiring strong vigilance. On the official website of The White House, the authors of the study state that AI will continue to be a valuable tool for improving the world and will contribute to economic growth in the coming years. The report, dubbed "Preparing for the future of Artificial Intelligence," predicts that the new artificial intelligence applications will have an impact in various fields, including manufacturing, business, stock market analysis, economic inclusion, criminal justice, environment, transportation, health care and space exploration.

The Obama administration considers that it is important that government, industry and civil society work together in order to manage the risks and challenges of the AI technology and develop its positive aspects. The Administration is committed to ensure that everyone has the opportunity to participate in building an AI-enhanced society as well as to take advantage of its benefits. The 58-page report commissioned earlier this year was released one day before the White House Frontiers Conference (that will explore the implications of AI) is scheduled to take place in Pittsburgh.

According to Space Daily, major tech companies are involved in an AI race. The emerging technology holds the potential to be a major driver of social progress and economic growth. AI can give an edge to enterprises that are moving fast to catch the opportunities. Google is among the companies that are making a high-profile push into AI.

The internet giant's chief considers artificial intelligence as a force for change as powerful as smartphones. Google Assistant software aims to outdo Apple's Siri. The software is being built into new Pixel handsets, enabling users to organize and use information in the cloud and on the devices. Google also offers AI through its standalone device Google Home hub, as well as through Allo messaging application that can be installed on smartphones.

The South Korean high-tech company moved to support its AI efforts by acquiring the U.S. startup Viv Labs.  According to Samsung, the purchase announced this month is part of its effort to develop AI-based voice assistance services for its customers. Samsung aims to provide these AI services across all its devices and products, from washing machines to televisions and smartphones.

In 2014, Amazon launched its Echo home assistant. The gadget is a voice-activated speaker that runs Amazon's Alexa artificial intelligence software. Users can use Alexa to order goods from the online retail giant as well as ask for news or information updates. Echo also works as a connected-home hub able to control light bulbs, compatible appliances and other devices. Since unveiling Echo, Amazon integrated Alexa into its Fire TV devices and launched a smaller version called Dot.

Microsoft's personal assistant called Cortana was unveiled in 2014. It comes pre-installed on its Xbox console and Windows devices, as well as an application on Android and Apple iOS devices. Cortana interacts with conversationally spoken commands and requests and is able to respond in a manner akin to a real-life assistant.

The giant social network Facebook is one of the companies that have heavily investing in artificial intelligence. Facebook's Messenger mobile application enables AI bots. It is also speculated that the company is working on a personal assistant codenamed "M." Mark Zuckerberg, the founder and CEO of the social network, has stated that he plans to create a real-life version of "Jarvis," the fictional assistant in the "Iron Man" Marvel Comics series.

Apple introduced its Siri digital assistant for the iPhone in 2011, being the first to offer an AI personal assistant. Since Siri was launched, the company has been continuously working to improve it over the years. Recently, the AI personal assistant Siri was upgraded to interact with non-Apple applications. Apple also introduced a Home application that is working on a standalone speaker similar to Google Home and Amazon Echo and can connect with smart appliances.

David Hasselhoff's Weird Film Is Written By An AI

Director Oscar Sharp and AI researcher Ross Goodwin's short film "It's No Game," swoops in artificial intelligence (AI) during a Hollywood writer's strike to write a script for the immortal David Hasselhoff.