The Galaxy S7 Edge Is The New King Of Samsung Mobile 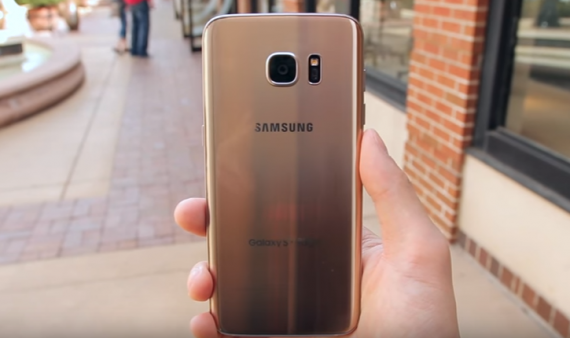 Now that Samsung's latest phablet is out of the picture, it's time to focus on the company's second favorite device, the Galaxy S7 Edge. While it doesn't have all the phablet goodness the Note 7 has to offer, it's still worthy to be called "the best Android phone in the market". Besides, it seems like Samsung is doing its best to make the S7 Edge the ultimate Note 7 replacement.

The most recent leaks reveal Samsung's plans of releasing a blue-colored Galaxy S7 Edge. This may just be a simple step to boost the device's sales. However, it's worth mentioning that the said blue color variant has first made an appearance in the Note 7 series. Thus, it's safe to assume that Samsung is trying to make the S7 Edge look a lot like the luckless phablet. Not that we're complaining. In fact, a blue coral colored S7 Edge is a happy addition to the S7 series. It's just interesting to think what else Samsung has in mind for the consumers.

Furthermore, in light with the Android Nougat rollout that has been making headlines lately, there is something more in store for the S7 Edge. Apparently, the S7 and S7 Edge are also getting the Grace UX on top of the Android Nougat update. The Grace UX was initially found on the Note 7 and it brings in quite a few extra treats. According to a Sam Mobile report, the said additional software even runs smoother on the S7 devices that the phone's current software.

Apart from being almost like the well-loved Note 7 (granted the phablet doesn't explode), the S7 Edge is also a very powerful device. It is uber-premium and is clearly hard to beat. Its 5.5 super AMOLED screen display is not something you'd see every day. It comes with a 1440 x 2560 pixel resolution that is around 534 in pixels-per-inch density. The display is vibrant, bright and undoubtedly pleasant-to-the-eyes.

Furthermore, the S7 Edge boasts of its IP68 certified body that makes it dust and water resistant. It is also powered by a super-fast processor that is the Snapdragon 820 and it comes with a relatively big RAM size of 4 GB. The S7 Edge comes with 32 and 64 GB internal storage but it can always be expanded through its microSD slot for up to 256 GB.

Camera-wise, the Galaxy S7 Edge is not that bad either. It has a 12 MP rear camera with PDA, OIS and flash. It also comes with a good 5 MP front camera. We've all known and loved Samsung for its expertise in creating good quality cameras and the S7 Edge is no exemption. It may not have the dual camera system that a few other companies boast of, but it sure does deliver great imagery. Not only does it take good photos, it shows good photos as well through its top-of-the-line display. You can get unlocked version here.

Google Pixel XL vs OnePlus 3T vs Samsung S7 Edge: Which Smartphone Is Still The Best?

The US Cellular variants of the Galaxy S7 and Galaxy S7 edge are receiving Android 7.0 update. The update brings a new user interface, better notifications and other new thrilling features.

Samsung Galaxy S7 Edge vs Galaxy S8: Is There A Significant Difference?

Samsung Galaxy S8 launch date is just a few weeks away. The current flagship, the Galaxy S7 Edge, is still arguably one of the best smartphones you can buy.

The Galaxy Edge S7 is considered to be one of the finest smartphones last year. With that being said, is the new Xperia XZ Premium up to the task of matching it?

Samsung continues to face controversy after Greenpeace protesters made their voices heard during the company's press event at the 2017 MWC. Also, a press release it published has generated some talk about potentially misleading readers.