Is The iPhone 7 Plus Really Worth The Price? Or Should You Go For Premium Android Instead? 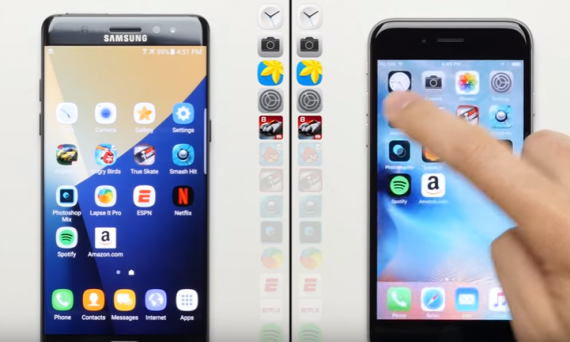 The argument of whether or not iOS beats Android still exists. (Photo : PhoneBuff / YouTube)

If the question is whether the iPhone 7 Plus is a good phone, then the answer is probably yes. But if the question is whether it's worth its high price, then an argument might as well be called for. Everyone knows that Apple makes great phones. However, everyone also knows that Apple's phones are always premium and expensive. So should you go Android instead? Here are some points.

If there's one thing that Apple's iPhones are loved for, it would probably be their fast performance. It's undeniable how smooth the iPhones' performance is and the iPhone 7 Plus is in no way exempted from this. It's quite surprising how iPhones beat Android in this aspect knowing that the iPhones' specs are usually inferior to premium Androids'. Remember that speed test between the iPhone 6S and Note 7? The old iPhone beat the new Android without a sweat. The same thing is to be expected with the iPhone 7 and 7 Plus. The Verge says the new iPhone is yet again superior to the Note 7 when it comes to speed.

So with the iPhone 7 Plus' tested and proven performance quality, plus all the new goodies Apple has brought with it, we can say that yes the iPhone 7 Plus is worthy of its premium label. Aside from its good processor, the 7 Plus also boasts of its waterproof build. It's not a groundbreaking technology but for Apple users, it's quite a big deal as this is the first time an iPhone was made to be waterproof. On top of that, the iPhone 7 Plus' dual camera system is also the cherry on top. Saying that it offers DSLR quality imagery might sound too conceited, but it's undeniable how great the iPhone 7 Plus' new camera system is. Its portrait mode is also something Apple should be given credit for.

While it's true that the new and old iPhones beat Samsung's best Android phone, it's also undeniable how much more advanced most Android phones are over the iPhones. It's worth mentioning that the iPhones are usually inferior when it comes to display, RAM size and battery size. The iPhone 7 Plus took quite a leap forward on these aspects, but it's clear that its Android competitors are quite ahead of it. Even the affordable OnePlus 3 can beat the iPhone 7 Plus when it comes to RAM size. It's basically 6 GB versus 3 GB RAM.

When it comes to display, the iPhone seems to be stuck in the past. The Galaxy S7 Edge boasts of its 1440 x 2560 pixel resolution and 534 pixels-per-inch density. The iPhone 7 Plus, on the other hand, is still stuck with a 1080 x 1920 pixels resolution and 401 PPI. With that said, the new iPhone is barely comparable with Samsung's best phones when it comes to crisp and vibrant display. Luckily, though, the iPhone 7 finally increased its battery size to 2900 mAh battery. It's probably made possible by the lack of a headphone jack. However, this size is still quite a thing of the past. The S7 Edge already has a 3600 mAh battery which is pretty much the standard battery size for this season.

Between an iPhone 7 Plus and another premium Android, it's quite intelligent to base your decision on your needs. But for the question of whether the iPhone 7 Plus is worth its price or not, it's safe to say that yes it is, but only if you need all its first-rate features. If you're just buying it because of the fad, then no, it is in no way worthy of its price. So as a whole, both the iPhones and Android phones have some features that the other don't. You basically just need to decide depending on what you deem important.

This New OnePlus 5 Leak Is All You Need

A series of OnePlus 5 leaks has flooded the internet hours before its official unveiling.

The latest on the OnePlus 5 front is that it will be launched on June 20 and that it looks so much like the iPhone 7 Plus.

The face of the upcoming Apple iPhone 8 is expected to feature a new OLED display with a screen-to-body ratio even more impressive than the 83% ratio managed by Samsung’s Galaxy S8 and Galaxy S8+.

News of Apple discontinuing updates for the iPad Mini points to its eventual death.