iPhone 7 Plus vs. Samsung Galaxy S7 Edge: Which Unit Rules The Smartphone Industry 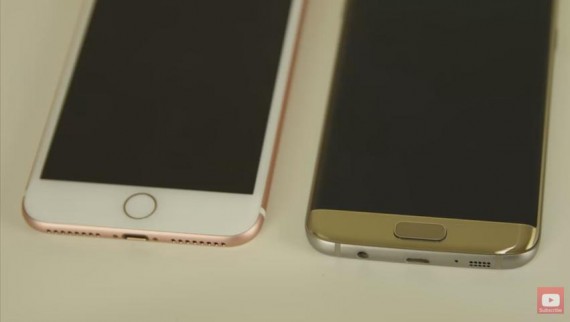 It’s a battle between the best Android has to offer and the best of iOS. The Galaxy S7 Edge and the iPhone 7 Plus are arguably the epitome of both platforms. (Photo : sakitech/YouTube)

It can be said that in terms of handheld devices, the general population can be split into two: the Android users and the iOS users. With the options available in the market, Android users definitely have more choices to pick from, but the Samsung Galaxy S7 Edge is definitely one of the most popular ones. Relatively, the iOS users have just generations of Apple iPhones to choose from - the latest and best being the iPhone 7 Plus.

Arguably, there are other good Android options in the market. However, if money was not an issue, the Galaxy Note S7 Edge is generally the best that is available. Especially since the Korean tech giant has stopped production on the Galaxy Note 7, which was once hailed the best smartphone of 2016.

According to its official site, the Samsung Galaxy S7 Edge sports a 5.5 inch Super AMOLED display. It weighs 157 grams and measures a comfortable 2.85 x 5.94 x 0.30 inches. It also has a very reliable 3000 mAh battery, which reportedly is good for 15 hours of WiFi usage and 12 hours of 3G.

Out of the box, the Galaxy S7 Edge runs on the Android 6.0 Marshmallow operating system and runs on 4GB of RAM. It is powered by a 2.15GHz, 1.6GHz, Quad-Core Qualcomm Snapdragon 820 processor. While this is no longer the most recent and most powerful in the market, it definitely still packs a punch.

The Galaxy S7 Edge sports a 12-megapixel rear camera and a 5-megapixel front camera. It has 32GB of internal memory, but this is expandable for up to 256GB via a microSD card. The unit has an IP68 rating, which means that it can last for up to 30 minutes for as deep as 5 feet of water. You can get unlocked version here.

On the other hand, Apple notes that the iPhone 7 Plus also has a 5.5-inch screen, which features  LED backlight. It is slightly heavier at 188 grams and measures 3.07 x 6.23 x 0.29 inches all around. While the 2900 mAh battery in the device is the best in its line, it is is slightly less powerful than Samsung's, but is also good for 15 continuous hours on WiFi and 13 hours on 3G.

The iPhone 7 Plus runs out of the box on the latest iOS 10. The Cupertino-based company boasts that the iOS 10 allows users to communicate in a more intelligent and more expressive manner. Further, it is powered by the A10 Fusion chip, which is Apple's latest and fastest processor. You cna get unlocked version here.

A 12-megapixel wide-angle camera and a telephoto camera are found at the rear of the device and a 7-megapixel camera is on the front of the device. Buyers can get the iPhone 7 Plus in 32Gb, 128GB, and 258GB internal storage options. It has a slightly lower IP67 rating, but it is still dust and water resistant.

The answer for what the better unit boils down to preference and priority. For example, the camera of the Samsung Galaxy Note 7 is great, but it is no match for the dual-lens system of the iPhone 7 Plus. On the other hand, the Note 7 has expandable storage without the overwhelming price tag, while storage has always been an issue when it comes to the iPhone.

And the main difference is, of course, the operating system. Therefore, it really is a battle between Android and iOS. Android generally offers more functional applications and more room for customization. Meanwhile, the updates to iOS are very timely and have unmatched syncing for and to other devices.

Wait; iPhone 8 Is The Design Overhaul The Public Has Been Waiting For

The iPhone 7 and iPhone 7 Plus have been flying off shelves. But it is the iPhone 8 that is arriving with the highly anticipated design revamp.

With the bad press surrounding Samsung products, there is a lot of pressure for the Korean tech giant to blow the smartphone market away with its upcoming device, the Galaxy S8.