‘PPAP’ Is The New 'Gangnam Style': How The World Is Going Crazy In Making Their Own Cover Of ‘PPAP’ 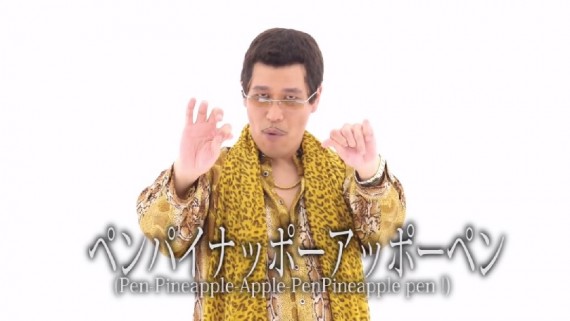 A screenshot from the MTV of hit novelty song "PPAP"

For sure, almost everybody from almost all parts of the world has already heard this infectiously addictive song lyrics: "I have a pen. I have an apple. Uuh... Apple Pen..."

"PPAP..." This weird, nonsensical one liner song has gone massively viral on Youtube where in just a month, the music video already received almost 50 million views. This might have not outshined Psy's "Gangnam Style" which holds a record of 800 million views, but this one surely caught every listener's curiosity.

Novelty song as it may be categorized, this viral Japanese "Pen-Pineapple-Apple-Pen" song created bycomedian/singer/songwriter and DJ Piko Taro has made some impact in today's music scene. Youtube's constant sensation, Justin Bieber even claims to love the song.

Trivia: Piko Taro is just a stage name, and Kosaka Daimaou is the real person behind the "PPAP" frenzy.

The song (if you can call it that) has instantly gone viral when it was first uploaded by 公式ピコ太郎歌唱ビデオチャンネル (Official Pico Taro singing video channel) on Aug. 26. The original video now has a over 50 million views to date. And yet again, another original video uploaded under the account of Chee Yee Teoh has surprisingly overtaken the first MTV, earning over a hundred million views. Recently, Piko-Taro even reported that his "PPAP" music was the most viewed video on Youtube -in the whole world - from Sept. 30 to Oct. 6.

Piko Taro has then released more videos of the same song but with other additional features, each getting millions and millions of viewers. Each version are funny in their own right but it will be difficult for someone who doesn't know Japanese to understand his new covers which are all in Nipongo.

But even in English and after the thirty videos I reviewed, I still don't get it why he wrote such song. Do Japanese really have a hard humor? Or naaah...they are just too creative that sometimes their genius-level of creativity comes down to total weirdness.

Well this, obviously (even if you won't agree), is the greatest thing that's going around the internet right now. Almost everyone around the world is trying to come up with a gig, hoping they would come close to the original MTV's views. Or maybe they find it quite fun to make a sillier video out of the original. A #PPAPchallenge was even created on Twitter where thousands and thousands of people are now participating, placing their own entries, hoping to find a spot at the top of the best "PPAP" covers made.

Let's try to look at some covers created by different artists from different parts of the world.

First up is NZ's kid version of "PPAP"

And the kids are now inflicted with the "PPAP" virus. Should we be concerned now? This insanity is now at a widespread that even children are joining the trend, and might even be singing it wherever and whenever. However, kids making their own version could be more hilarious than anyone else.

This one's especially cute. This little man could have caught more viewers though with a little push, but his intentions of bringing his voice and moves to the #PPAPchallenge is quite enough to be mentioned here. I haven't found a cuter kid version of it anyway.

And whoever thought of doing this cover is even more insane. Who would've thought of bringing the moves to the animal world? I, for one, would think of starring my own self if I want to be in the #PPAPchallenge rather than forcing an innocent dog to star in a frivolous MTV.

Anyway, since it is sillier than silly, I'll give it a chance to be more famous.

New Trio of the Philippines

And of all the countries taken over by the "PPAP" madness, nobody seems to love the song as much as the Philippines (who is actually known for mimicking MTVs).

Filipinos have taken a shine to the #PPAPChallenge to create their own cover of the music video that might not match the humor of Kosaka's song and dancing, but will showcase another level of talent based on the song.

While most videos are now getting nonstop hits on Youtube, this fresh group mixed fun and cool together and came up with a good RnB version of the novelty song.

Gene Carlo - CarlitoRomantiko's RnB "PPAP" cover basically shows us that this song is so addictive. These three guys even chose to do their version while driving downtown.

Warning: Readers, please be advised not to listen to "PPAP" while driving, it has become so addictive that it might cause accidents; basically because you have to let go of the wheels just so you can do the must-dance gestures of pinning a pen on a pineapple and an apple.

The light sound used in the video has strayed away from the usual covers done by "PPAP" fans, and it is actually very refreshing to hear something that went off the original "PPAP's" beat. While this video seems to have lesser views than the others, these guys still nailed it because the unique (and again dangerous) setting, the cool rendition they incorporated in the silly lyrics of "PPAP," AND it came without the yellow costume!

Your Kpop idols BTS, UP10TION, LIME, and MONSTAR also did a cover. It's a worldwide trend. Why on earth won't they cover it. And while the song is too silly for them to cover, they still looked adorable!

While Korea had its time with Psy's "Gangnam Style," your most loved Kpop stars are joining the madness and are in no effort doing a cute collection of "PPAP" cover. Why I loved this?

Simply because they are too adorb to not watch!

And it's quite fun to see these idols make themselves look so ridiculous just so they can send an entry for the #PPAP challenge.

This man I must say is crazier than Piko Taro. His obsession with "PPAP" has made him create two versions, yes, but his latest one was a collection of 9 styles of singing "PPAP". He claimed to get 21000 new subscribers out of the first cover of "PPAP" that he placed on Youtube on Sept. 28. Youtube viewers have been highly attracted with his first and second covers that earned over 28 million views and over 16 million views respectively.

His efforts of editing the original to clash with his version (where he even dressed up like Taro - so much effort indeed) and make it look like a showdown has sold to viewers that he again came up with a second version which featured a "Gangnam Style" version, a "Hotline Bling" version, a "Hello" version, "Shake it Off" version, and much more.

For his efforts, his time, and his budget (most especially), this guy deserves a place on top for the best "PPAP" covers.

Now that you have seen a lot of hilarious and well, not so hilarious versions here, for sure you are now in an LSS and might even be thinking of making your own cover. Please, share them no more, I had enough Pen-Pineapple-Apple-Pen singing at the back of my head, day to night, bedroom to bathroom. Oh my...too bad I have that LSS too now.

The average life span of music band in South Korea is five years before members go in different directions to pursue solo careers. Boy bond SHINee, however, is an exception to the rule since they have been together for nine years and have no plans to disband.

Popular Japanese icon, Pikotaro has just revealed how much he earns from his viral song, "Pen Pineapple Apple Pen".

Do you have a pen, an apple and a pineapple? Then sway to the ridiculously catchy beat of the PPAP song.