The Galaxy Note 7 Is Irreplaceable; The S7 Edge Can't Beat The Samsung Phablet 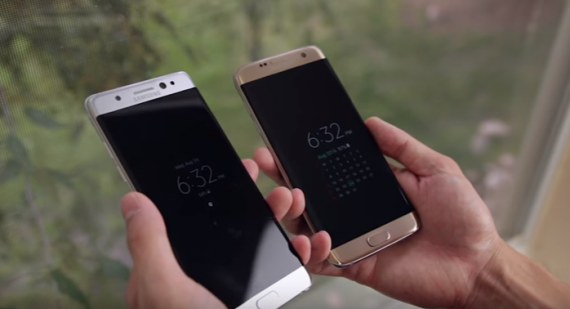 Samsung's Note 7 fiasco is now over, but the challenge to find an alternative is still ongoing. While the company would want people to use the S7 Edge as a Note 7 alternative, not all phablet fans have the same opinion. (Photo : Android Authority / YouTube)

Note 7 users understand how hard it is to find a phablet as good as the Note 7. While the explosion controversy is a serious matter, users of the Samsung phablet who haven't seen their devices explode are quite reluctant to give their phones up. Even though Samsung seems to be persistently suggesting that the S7 Edge is the best replacement for the controversial phone, most Note 7 fans beg to disagree. For most users, the Note 7 is irreplaceable.

Samsung may not have said it straight to people's faces, but it's clear that the company wants you to get the Galaxy S7 Edge as a Note 7 alternative. Just recently, a blue-colored S7 Edge has been leaked and it pretty much resembles the Galaxy Note 7. If you must know, the blue coral color was first made available by Samsung with the Note 7. Now that they're bringing in the same color to the S7 Edge, it's clear that they want the older flagship to look a lot like the controversial phablet.

On top of that, rumor has it that the S7 Edge will also get Note 7's Grace UX. According to GSM Arena, the Grace UX will be sent out to the Galaxy S7 Edge together with the Android Nougat update. This basically suggests that once the blue variant and Nougat update are out in the open, the S7 Edge will be so much like the Note 7 device.

S7 Edge Isn't A Complete Replacement For The Note 7

Sure, the S7 Edge is arguably the most viable alternative for the Note 7. However, if you just used the Note 7 and got forced to shift to the Galaxy S7 Edge, you'd feel the difference almost immediately. First of all, the two phones' sizes and shapes are considerably different from each other. According to a Forbes review, the S7 Edge's screen is a little too steep for a comfortable grip. This brings in the problem of erroneous screen-touches. Phone users who are not used to using Edged screens might encounter this as a problem whether or not they used to be a Note 7 user.

Furthermore, the Galaxy S7 Edge is also not as good as a phablet as the Note 7. It's worth noting that the S7 Edge doesn't have a stylus. Most of the people who are reluctant in giving back their Note 7 are talking about the phone's S-Pen and S7 Edge's lack of it. Unfortunately, this is something that Samsung may not be able to control. They can offer the blue color to the S7 Edge and even rollout Note 7's software tweak to the curved phone, but it's pretty difficult to incorporate the stylus to the seven-month-old flagship.

People can argue about S7 Edge's capacity to replace the beloved phablet. However, everyone can probably agree that the best replacement for the Note 7 will be its successor. With that said, we can just hope that Samsung will release the Note 7 successor ahead of time. Whether or not the company will re-brand their phablet line, it doesn't matter. What matters to fans is for them to get a hold of Samsung's new, improved and non-exploding phablet.

The Galaxy Note 8 Schematics Confirm Fingerprint Scanner On The Back

There aren’t dual-front-facing speakers because that would mean a lot of bezels would be required in order to make this change. Instead, one speaker grill is present at the top, while the other grill is at the bottom.