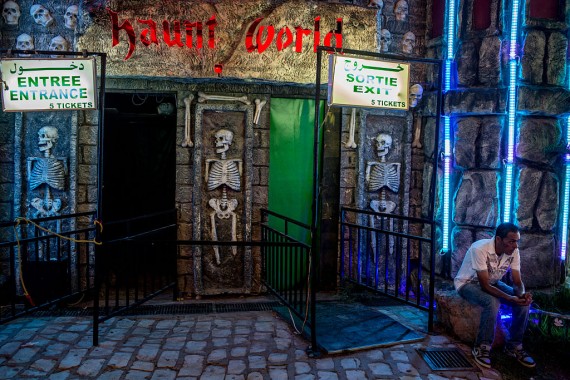 SOUSSE, TUNISIA - JUNE 24: A man waits outised a haunted house ride at a tourist amusement park on June 24, 2016 in Sousse, Tunisia. Before the 2011 revolution, tourism in Tunisia accounted for approximately 7% of the countries GDP. The two 2015 terrorist attacks at the Bardo Museum and Sousse Beach saw tourism numbers plummet even further forcing hotels to close and many tourism and hospitality workers to lose their jobs. The 26th of June marks the first anniversary of the Sousse beach attacks. (Photo : Photo by Chris McGrath/Getty Image)

Telling horror stories has been a habit for people who would want to be scared at the moment. Horror stories are most popular during sleepovers or break times. With Halloween drawing near, maybe a great number of horror stories should be worth reliving.

You may want to share the screen to your friend to avoid regretting that you read this horror stories alone. Here are some:

1. The Exorcism In Indianapolis

Esquire detailed out this true-to-life horror story that happened in Indianapolis. A publication in the state released a report regarding a family frightened by children possessed with demon. As per the family, they saw children, with deep and scary voices, climbing up walls and throwing things on rooms. It was a controversial report for everyone, as some think that it was just happening in movies, but psychologists, priest and family members proved that the 800 pages report by witnessing in series of interviews

The possessed child was on the report and as it was stated:

According to Washington's original DCS report-an account corroborated by Walker, the nurse-the 9-year-old had a "weird grin" and walked backward up a wall to the ceiling. He then flipped over Campbell, landing on his feet. He never let go of his grandmother's hand.

The 12-year-old would later tell mental health professionals that she sometimes felt as if she were being choked and held down so she couldn't speak or move. She said she heard a voice say she'd never see her family again and wouldn't live another 20 minutes.

About Entertainment told that the story was about a traveling salesman driving an old car in a highway going to south. The man was looking for a motel to stay in during the night but as he drove he met a woman in a lavender gown standing and asking if she could have a ride.

The man agreed and the woman was so happy that she was permitted to ride. She then told that her date abused her during the prom and she just wants to get home. The man gave her the sweater because of the chilling weather.

3. The Death Of Elisa Lam

Elisa, the victim, was last seen on January 2013 in Cecil Hotel, downtown Los Angeles. She is on the midst of vacation busy documenting her adventure on the blog. She is used to calling her parents but the call stopped on the date she was last seen.
A video showed that Elisa was acting strange in the elevator, talking to unseen people. She is crouching in the corner and kept on closing and opening the door. It was believed that Lam was possessed by a demon.

"The shower was awful," said Sabina Baugh, who spent eight days there during the investigation. "When you turned the tap on, the water was coming black first for two seconds and then it was going back to normal."

The tap water "tasted horrible," Baugh said. "It had a very funny, sweety, disgusting taste. It's a very strange taste. I can barely describe it."

But for a week, they never complained. "We never thought anything of it," she said. "We thought it was just the way it was here."

The body of Elisa was seen decomposing in the water tank of the hotel.

Here's the video of the weird actions of Elisa:

Halloween Costume Ideas That Gives A Bang For Your Buck

Tired of looking for a costume for the Halloween? Maybe this is what you are looking for.

Coolest Places To Visit This Halloween

Ever felt like you need to take a break? Maybe this would be a great way to relax.

The holiday is fast approaching, horror movies are on demand. The question is what movies exactly?

"American Horror Story" will start its production by June. However, one of its star, Cuba Gooding is in deep trouble due to his actions against his co-star, Sarah Paulson.

"American Horror Story" season 7 will depict the horrors of the recently conluded 2016 U.S. elections where Donald Trump and Hilary Clinton will be portrayed. The filming of the installment is set to start in June and might premiere later this year.