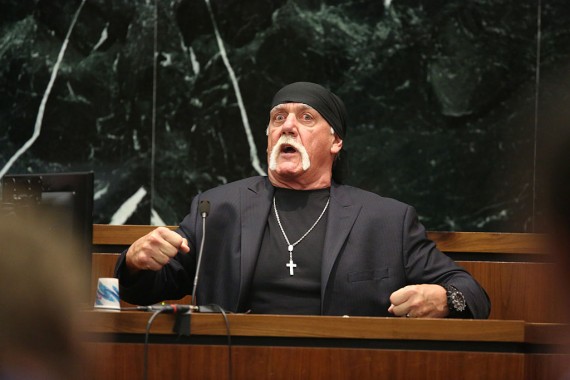 ST PETERSBURG, FL - MARCH 08: NY POST OUT Terry Bollea, aka Hulk Hogan, testifies in court during his trial against Gawker Media at the Pinellas County Courthouse on March 8, 2016 in St Petersburg, Florida. Bollea is taking legal action against Gawker in a USD 100 million lawsuit for releasing a video of him having sex with his best friends wife. (Photo by John Pendygraft-Pool/Getty Images) (Photo : Pool / Pool)

The U.S. Presidential Election is almost here and this one could rewrite U.S. history books. The final and last debate the other day ended in a fiery battle of words by Republican's Donald Trump and Democrat's Hillary Clinton.

Each political parties has its own agenda. Both of them are tooth and nail when it comes to convincing the voters on who'll they vote this November 8, 2016. They are not showing any implications of backing down and both are determined to win. A lot of experts already claimed that this year's US Presidential Election could be the nastiest in the history.

Although the final debate ended already, their supporters are still on fire. Their supporters are not done yet with voicing out who to vote this coming elections and they're turning on to social media. Nowadays, most supporters show their support through social media. Some of them still does it the old fashion way, which is to campaign from block to block. However, we are going to focus on celebrities who supports the business tycoon and the representative of the Republicans, Donald Trump.

Donald Trump is a self-made billionaire. He owns a lot of hotels, restaurants, logistics, and other big companies related to manpower. He is not your typical Presidential candidate. While other candidates use a systematic well-thought process in giving a statement, Trump uses the other way. He is brash and cocky when it comes to delivering speech. And he treats the Election process as a business.

Before we start our countdown with regards to celebrities who supports Donald Trump's candidacy, please take note that I am not supporting any of the two parties. So,here's our top 5 supporters of Donald Trump.

This is a shocker as most experts reported. During Trump's campaign, you will see a lot of times that White Americans are bullying Black Americans. There are times that it even escalated to high that they beat up a black guy. When Trump mentioned that he wants America to be tough again, We were not expecting that he's talking about Mike Tyson.

The NBA Hall of Famer and former celebrity apprentice showed his support towards the Donald. He posted on his twitter page stating "We don't want another politician, we need a businessman like Trump". It was really a no brainer when "The Worm" endorses Trump. They've been friends for how many years already and he was part of two apprentice shows.
3.Gary Busey

Academy Award Nominee and another member of the celebrity apprentice joined the Donald Trump Bus. Gary Busey said that Donald Trump has the ability to captivate the crowd without doing anything. He also implies on how a great impact Trump is in US history. He even call him a national treasure.

A legendary actor and one of the most respected guy in the business. John Voight said that Donald Trump is funny, colorful and honest. He sees Trump as the only man capable of bringing back US prosperity.

Former WWE Superstar and Hall of Famer Hulk Hogan doesn't only support Donald Trump, he wants to be his running mate as Vice President. The WWE legend said that Donald Trump is the kindest man alive and will do anything to support him. Unfortunately, both of them are alleged racist.

Daily News reports Trump who "fired off" on Rice during his keynote speech at Learning Annex Real Estate and Wealth Expo. "Condoleezza Rice, she's a lovely woman, but I think she's a bitch," Trump allegedly said "to wild applause." "She goes around to other countries and other nations, negotiates with their leaders, comes back and nothing ever happens."

On Oct. 17, Stern opened his radio show with a segment in which he reacted to the news coverage surrounding his old interviews with Trump.