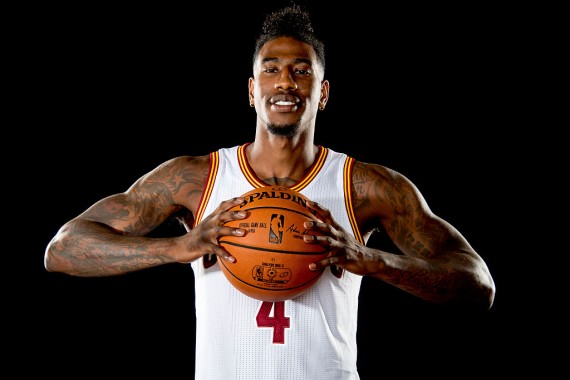 CLEVELAND, OH - SEPTEMBER 26: Iman Shumpert #4 of the Cleveland Cavaliers poses for a portrait during media day at Cleveland Clinic Courts on September 26, 2016 in Cleveland, Ohio. NOTE TO USER: User expressly acknowledges and agrees that, by downloading and/or using this photograph, user is consenting to the terms and conditions of the Getty Images License Agreement. Mandatory copyright notice. (Photo by Jason Miller/Getty Images) (Photo : Jason Miller / Stringer)

Only few days left before the NBA Season begins and a lot of teams are still trying to shake up their roster.

The objective of each NBA team is to make their roster better every year. They have to make sure that their nucleus is tight for them to have a better chemistry. Health is also a number one concern in every NBA team. As we have seen in the past, players who have a promising career tends to go back to zero once their career is derailed due to injuries.

Some of the notable injuries that destroyed their career and ultimately getting traded from city to city are players like Anfernee "Penny" Hardaway, Grant Hill, Tracy McGrady, Brandon Roy and now, Derrick Rose. Rose was the youngest NBA MVP ever in history. He was on the path of greatness until the gruesome injury happened. He tried to go back as the old D.Rose but just couldn't do it. Then the Bulls decided to trade him since the future is uncertain due to his looming injuries.

This off-season, there are a lot of big names who were traded and signed up for a bigger and brighter contract. The biggest name is none other than Kevin Durant. The former MVP and multiple scoring champion decided to sign with its rival Golden State Warriors; which pissed of the Thunder fans. Next is Dwyane Wade. Wade already mentioned before that growing up he wanted to play at the United Center, same with his idol the GOAT, Michael Jordan.

Joining Dwyane Wade are the former NBA Champion Rajon Rondo and versatile Big Man Brook Lopez, who was acquired from New York. In return, they have to let go of Derrick Rose, nobody saw it coming and NBA fans and players were absolutely stunned. Victor Oladipo, Serge Ibaka, Jeff Teague and George Hill are just some of the prominent names who were traded this off-season.

The latest member of the NBA trade rumors are, Swingman from the defending Champions Cleveland Cavaliers, Iman Shumpert, steady Point Guard from Minnesota Timberwolves and the King's backcourt, Darren Collison and Ben McLemore. Let us check first why Cavaliers are trying to market Iman Shumpert.

The Georgia Tech standout is again on the trade block because of one important reason. The Cavaliers right now has only two point guards, Kyrie Irving and Kay Felder. Felder is still a rookie and Cavs wants to have a backup point guard who is a crafty veteran. They have a lot of options in mind including Spain's own, Ricky Rubio and UCLA alumnus Darren Collison.

For Timberwolves agenda, since they already have a rookie sensation in the name of Kris Dunn, they are already looking to move without Ricky Rubio. Rubio is one of the most consistent pure point guards in the NBA, but he can't shoot. Right now, point guards are ruling the NBA and Timberwolves needs to keep up with the pace.

Lastly, Darren Collison and Ben McLemore. This trade is actually interesting. The Kings organization are actually open in trading their starting backcourt. Ever since Rajon Rondo left Kings, they felt that they need to rebuild their backcourt with solid defense and a dependable three point shooting. The only available on the market right now that has that two capabilities is Iman Shumpert. So guys, we are looking at a possible three-team deal.

Kristaps Porzingis just posted an interesting tweet about him joining the Clippers but unfortunately, it was deleted immediately. Also, the Lakers are pulling all the strings to acquire one of the big names in free agency next season.