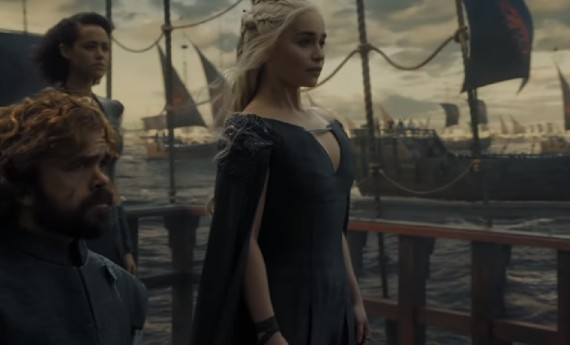 "Game of Thrones" season 7 is yet to come back on the small screen but countless spoilers have already surfaced. Now reports claim that the supposed plot of the whole new season was allegedly leaked. A Reddit user named awayforthelads has dumped what is believed by many as the complete leak details of "GOT's" whole season 7.

The same user has been the source of "Game of Thrones" season 6 spoilers, which proved to be pretty accurate as the said season ran. Now once again, fans - though some appeared disgusted with the act - are feasting on the teasers of "Game of Thrones" season 7's nine episodes. Actress Nathalie Emmanuel (Missandei) even tweeted about the spoilers that she might have failed to realize is a probable confirmation that the leaks are authentic.

Ready to discover how your favorite fantasy series might unfold in its upcoming return? Spoilers on the way. Read at your own risk.

The White Walkers will be seen marching towards south on the Wall. Bran will cross the Wall back into Westeros and will meet with Dolorous Edd who is now the Night's Watch's new Lord Commander.

Sansa Stark and Jon Snow will argue about what they should do with the Northern houses who fought with the Boltons as an act of their betrayal. Sansa and Lyanna wish to offer their lands to their loyal supporters but then Jon will refuse to hold responsible of the Karstark and Umber children. Jon will do things his way and will tell the others to live with his decisions because he will start ruling the North in a more different way.

Daenarys and her fleet will then arrive at Dragonstone where she will go into the old war room carrying the map of Westeros then turns to Tyrion to ask, "Shall we begin?"

Jon will receive a raven from Daenarys carrying a message to meet her on Dragonstone to make a bet. Both Jon and Davos will then go to ask for some of the dragonglass on Dragonstone. Sansa will then be left in charge of Winterfell.

Meanwhile, Jaime will confront Olena Tyrell. She will reveal to Jaime everything about how Joffrey was poisoned by her and Littlefinger. Jaime at his disgust will allow her to drink the same poison before she gets captured.

Euron's Fleet will destroy Yara Greyjoy's and will take her as a prisoner. Theon will however escape as he jumps overboard and will soon be rescued by other Iron Born.

Euron and Greyjoy will then attack Dorne and capturing Ellaria.

Both Jon and Davos will arrive on Dragonstone where they will meet Tyrion on the beach. Tyrion will then bring them to meet with Daenarys where she will demand Jon to bend down on his knee but will refuse to do so.

Jon will instead talk about the White Walker's threat but won't believe him.

Davos then comes in between to try to tell Daenarys about Jon's resurrection, but Jon will dismiss the talk. Tyrion will also step in to say that Jon's a good guy and testify that he is not insane. With all these, Dany will immediately respect Jon but the latter will not return the sentiment.

Jon will then meet with Theon and spares his life after he helped Sansa escape.

Meanwhile, Arya will have an encounter with Nymeria on their way to Winterfell. Jorah, on the other hand, will meet in Old Town to find a cure for greyscale.

Arya will be seen finally arriving at Winterfell. Dany, on the other hand, will torch a few Westerosi lords with the help of her dragons including Sam Tarley's father and brother.

Jaime and Bronn, together with the Lannister army, will be ambushed by Dany or Dothraki or the dragons while they march back from Highgarden. They will be defeated and Jaime will be seen almost killed by dragons but will be saved by Bronn.

Meanwhile, Jon will come to realize that the only way to get Westeros to fight the White Walkers is to present a live zombie that he can show to everyone.

Sam will leave Oldtown to march to Winterfell with Gilly.

Jorah will reunite at this point with Dany at Dragonstone right after healing his greyscale. Jon will again receive a raven informing him that Bran and Arya are already at Winterfell.

Jon, Jorah and Gendry will then set sail to the Wall. They will try to capture a White Walker's zombies so they can prove to the other Westeros lords and Dany that such creature exists.

On the other hand, Jamie and Bronn will secretly meet with Tyrion and Davos. Tyrion will try to persuade Jamie to convince Cersei to surrender but Jamie will ignore his plea.

Jon will arrive at Eastwatch-by-the-Sea at the beginning of this episode. Apparently, Tormund locked up a member of the Brotherhood without Banners in jail. Jon will then lead a small force that will include Beric, Jorah, Tormund, Thoros, and Gendry as they are attacked by the army of the Night Kings who has brought along a zombie polar bear which will kill Thoros.

The group will be surrounded on a frozen lake when Dany arrives to save them with her dragons. Jon will however be left behind. The Night's King though will kill her dragon Viserion but will resurrect it, turning it into his own zombie dragon mount.

A special note revealed that Jon gave his promise to Dany that he will leave his throne given that the latter will agree to help him fight the White Walkers.

Sansa will put Littlefinger to death raw, where Arya will carry out the execution. This follows Littlefinger's attempt to turn Arya against Sansa with the use of an old letter that Sansa wrote to Robb Stark. Bran will help Sansa realize this ploy, hence the latter's decision to kill Littlefinger.

Cersei will also have a miscarriage in this episode.

As for Sam and Bran, they will come to figure out that Jon's real name is Aegon and that he is actually legitimized at birth by his parents, Rhaegar Targaryen and Lyanna Stark.

A romance will then brew between Jon and Dany and will be intimate as they head North.

The Wall will finally fall at the end of this episode as the Night King will attack it with zombie Viserion.

An Episode with Unsure Chronology

Later in season 7, the entire cast of the show will be seen all together in a dragon pit scene. A parlay will happen between Cersei and Dany which will lead everyone to assemble at the said dragon pit.

Jon will then have his chance to present the zombie he captured in the hopes of convincing the lords of Westeros that their land is in danger.

Cersei will order the Mountain to kill the zombie, but seems to be immortal even after cutting the creature into pieces. Jon then explains that only a dragonglass can kill it. Cersei the promises her help to Jon, but later reveals to Jamie that she was only lying. She then explains that she can use the zombie horde to take out her enemies. Jamie will however disgust her intention and will ride north to leave her.

Whether these spoilers are legit or not, the only way to find out is to wait for "Game of Thrones" season 7 to air in 2017.

"True Detective" has been on hiatus for more than a year now, thus making fans of the crime drama series worried about the show getting cancelled. However, HBO's programming chief, Casey Bloys, said that the show "is not dead."

"Harry Potter" star Daniel Radcliffe hopes to take a role in the Emmy Award winner "Game of Thrones" even if it means killing him right after he appears.

Kit Harington has revealed that Jon Snow is in for a big change in the new season of "Game of Thrones".

With "Game of Thrones" Season 7 just right around the corner, gathered data reveal that the series has discreetly shown another significant character.

HBO Confirms Winter Is Coming In 'Game of Thrones' Season 7

The newest trailer for "Game of Thrones" Season 7 has revealed that winter is finally here and more of the chaos that's expected to happen is finally featured.