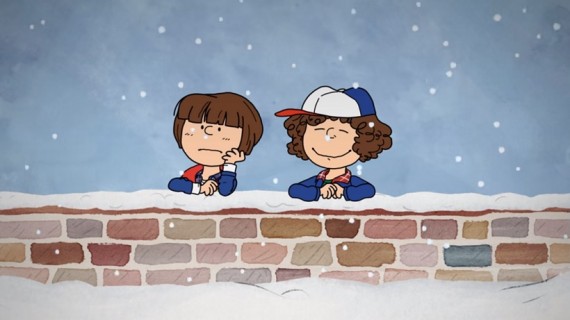 A screenshot from the Christmas special mashup of "Peanuts" and "Stranger Things" (Photo : OnlyLeigh via Youtube)

The world of "Stranger Things" have been all "upside down" with a lot of mysterious and crazy things going on with the town folks and the kids who star in the mega-hit show. Yet as Christmas is fast approaching, comedy writer Oren Mendez and animator Leigh Lahav gave the "Stranger Things" main cast a break with a clever funny short mashup, bringing Will Byers, Eleven, and Barb into the world of "Peanuts." Who knows, this might even be a hint that Will is going to star in season 2 and Eleven will still be back.

Will basically starred in the short film, stepping in as Charlie Brown, where he kept on ranting to the kids of "Peanuts." While Schroeder, Lucy, Linus, and everyone else in the kid cartoon thought they had the biggest problems of being a kid, here comes Will who showed them another level of life trouble where he feels guilty and depressed over losing Barb at Upside Down.

Here, the kids of "Peanuts" showed Will how life should actually be simple. They slammed him with the fact that every problem has a solution and that he should not depress himself over what's already done. Moving on was Will's problem. He approaches everyone from "Peanuts" including Eleven who gave him a funny "Eggo" answer as the solution to his problem. Even the demogorgon would not want to join him in his depression, until he realized - with the help of his new friends from "Peanuts" - that all he needed was his friends who truly care for him and time to let go of his troubling past.

While the short film was indeed a smart idea for fans of both hit Netflix shows, one cannot neglect the important lesson that the easy-living kids of "Peanuts" taught the very anxious Will of "Stranger Things."

"Peanuts" to "Stranger things" - All you need is a friend to cope with your problems.

Like Will, the true value of friendship is something that most of us forget and would take time to appreciate. Will got lost at the beginning of "Stranger Things" season 1, but his mother along with the rest of the town folks and his friends never gave up on their hopes that they will soon find him. Will forgot about that fact that everyone else in town were worried sick about him and placed great efforts to recover him. Will was busy thinking about his emotions that he failed to see how many people cared for him, which should actually be enough for him to feel secured.

Friendship provides us with someone to hang out with and talk to, share laughter with, get advice from, and so much more.

What did "Peanuts" teach Will about Friendship?

Will complained as he felt he cannot get the right answer to his problems, hence his notion of being alone. Yet the kids answered him that he has a lot of friends, and Will came back to his senses as he remembered how everyone tried to look for him. One value of friendship is the companionship aspect of it. Friends are companions you can enjoy through the good and bad times.

Throughout the video, Will has been approaching everyone including Wynona to express his thoughts. Though he felt like no one can understand what he is going through, everyone from both "Peanuts" and "Stranger Things" tried to listen to him. Conversation, whether virtual or actual, is another thing that friendship provides. We all need someone to talk to and share our thoughts and feelings with, and sometimes more than our family, friends are those who are great in providing this.

When Will got lost, his friends - though they were only kids - tried to find him even if they faced great danger. This he only realized when the "Peanuts" kids reminded him about how his folks were always there for him. Every once in a while when you find yourself in trouble, true friends will be the first one to be there to help you out.

As the video was entirely humorous, the thing there is that the kids, even Eleven, tried to make Will happy in his so-down-moments. Good friends will help you find laughter in times of depressing moments. No one can actually make you laugh as hard like your friends do. This is what Will realized at the end of the video where he admitted that he should be happy since he has his friends to help him be.

We heard a lot of pieces of advice from the different characters of "Peanuts." Eleven, even if she appears hurt, was there to listen and give a "psychotic" - as opposed to her being a psychic - answer that eating Eggos will take away all of his problems. Friends often provide us with helpful advice, even though at times we find them irrelevant. But if you dig in deeper, those thoughts might just be the right answer to your troubling questions in life.

And then there was Barb to wrap up the video bringing back the thrills after the dramatic crossover of Will with the kids of "Peanuts."

Countless theories came out on how things in "Stranger Things" season 2 will run. After collecting all these fandom theories, here are five notable theories about the mysteries of Upside Down.

Theories about "Stranger Things" season 2 storyline continue to make rounds on the internet, and the latest claim that Eleven is alive and that she is under Chief Jim Hopper's care. Meanwhile, star Noah Schnapp finally answered speculations and criticisms about the sexuality of his character Will.

"Stranger Things" season 2 has revealed a number of big surprises, and now it is bringing another blow as its production team confirmed the addition of Sadie Sink and Dacre Montgromery in the cast.

"Strangers Things" gets entangled with the "Peanuts" universe with a new animated Christmas special spinoff. Check out the video and more details here!

Alyssa Milano is NOT the ONLY ONE Wearing a Crocheted Mask: Actress Speaks up Against Twitter Bashers