Why I'm Waiting For The Samsung Galaxy Note 8 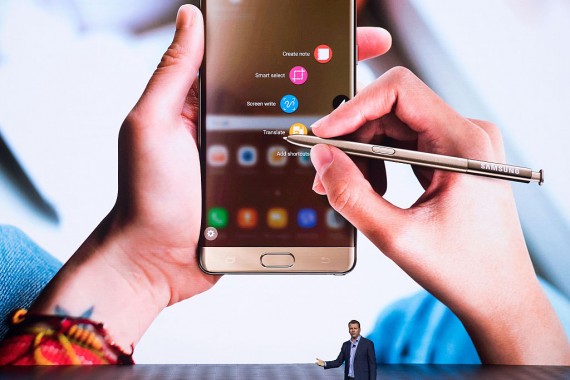 2017 is coming in and in the tech world this means one thing - new smartphones are coming in! (Photo : Photo by Drew Angerer/Getty Images)

The Samsung Galaxy Note 7 may as well be forever known for its explosion cases, but it doesn't mean that the Galaxy Note 8 and the Note series both have to suffer because of it. There have been rumors in the recent weeks that point out to Samsung's total discontinuation of the Note brand. While most people took this coldly, Note fans didn't.

Even though Samsung has admitted to the Note 7's flaw, fans of the Note series are unhappy with the cancellation rumor. Fortunately for them, the rumors turn out to be false. Samsung may not have debunked the hoax clearly, but their recent announcement implied that the Galaxy Note 8 will still see the light of day.

As per Reuters, Samsung is offering its recall participants an upgrade program. Note 7 buyers who had their devices replaced with either an S7 or an S7 Edge will be able to get a big discount when new Samsung flagships get released. It was said that those who got their recalled phablet replaced with the S7 or S7 Edge will only have to pay half the S7 price to participate in the program. This trade-in program is said to be applicable to the Galaxy S8 and the Galaxy Note 8. It's worth noting though, that this deal is confirmed to occur in South Korea. As per Tech Times, global launch is still uncertain at this point.

With Samsung subtly mentioning the Note 8, it goes to show that the Galaxy Note series is pretty much alive and kicking. With that said, there should be a number of Note loyalists who would be happy to wait for the Galaxy Note 8 despite the Note 7's infamous incidents. Sure, Samsung sees the threat of losing loyalists hence the generous trade-in program. However, the online community has actually seen a bunch of Note 7 users who are reluctant to surrender their phones.

There are people who claim to have been Note users ever since the series started. There are also people who admit not returning their Note 7 phablets despite the recall. What this says is that there's a good chance that the Galaxy Note 8 will still be embraced by the market.

Samsung Galaxy Note 8, Why It's Still A Great Buy

Despite the Samsung controversy that flooded the mobile phone world this 2016, there are still a bunch of reasons why the Note 8 will be a great buy. For starters, Samsung has already learned their valuable lesson in quality control. There's a pretty good chance that this exact same mistake won't happen ever again to Samsung, especially if they are given the chance to develop the Galaxy Note 8 from scratch instead of just fixing a smartphone in a recall.

Samsung may have learned it the hard way, but it's safe to say that quality assurance will be on top of the company's list for their next products. With that, we can say that the Note 8 is still a worthy purchase. Besides, it's the only smartphone dedicated to providing a stylus and an uber-premium specifications. You can get a stylus-based phone or a premium phone from other brands, but there's no assurance that you can get both traits in one phone. Samsung's vivid display, top-of-the-line processors, first-rate cameras, etc. are all reasons why the Galaxy Note 8 will still be a great purchase.