Apple TV: Its Features, Pros, Cons And Why It's A Bad Investment 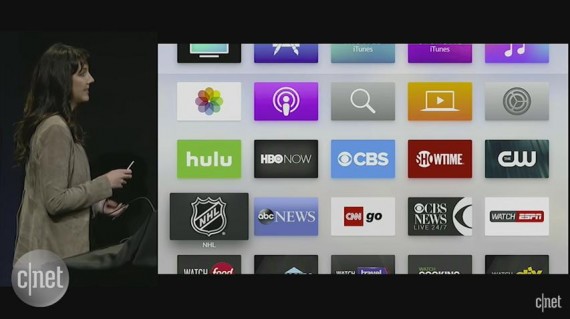 On October 27, Apple unveiled some new hardware and some software. The new software for Apple TV, called “TV,” is theoretically efficient, but what exactly will it cost users? Hint: It’s more than just money. <br /> (Photo : C|Net/YouTube)

Just a few days ago, Apple introduced the public to some of its newest hardware and software. And while the new 2016 MacBook Pro was definitely the star of the night, the Cupertino-based company definitely talked about the new features it was including to Apple TV. The new application, simply called "TV," is a logical inclusion, but it does come with its drawbacks.

In Apple CEO Tim Cook's introduction for TV, he called it a unifying application for all of the user's prefered media platforms. "A unified TV experience that's one place to access all of your TV shows and movies, one place to discover great new content to watch," he said. And it sounded like a great idea.

As C|Net notes, there are definite benefits when it comes to Apple TV's newest application. For one thing, TV cuts out the middle process, which is really the tedious part of it all. Essentially, users would have access to all the Apple-supported video applications and will also provide users with suggestions. Much like Netflix's "Continue Watching" feature, expect expanded to a variety of different applications, which include Hulu, HBO Now and Starz. Clicking on one video will immediately lead to the next one in the series.

However, some of the most popular streaming sites - Netflix and Amazon - are actually not compatible with TV. Amazon's absence should not exactly be a surprise since has never been part of Apple TV and likely never will be. On the other hand, Netflix was once a part of the Apple TV universal search. And given its popularity, one would think that the Cupertino-based company would like it as part of its arsenal.

Of course, Netflix is still part of the Apple TV itself. However, it is not part of the TV new application which the company boasts is meant to streamline the entire experience. So it is a little off putting that Netflix is not part of it, which primary leaves out "Orange Is The New Black," "Narcos," "Stranger Things." and other Netflix originals.

Wired adds that during Apple's event, the company's demonstration required plenty of cable long-ins to authenticate. Because of this, there is the added hassle of having to log in. Theoretically, the new TV app might be less of an added convenience and more of work.

However, Apple did disclose that the application is still going to be developed and will include better and more features upon its release and the weeks following it. In fact, the Apple team itself admits that the feature is still in flux. This is good news, because as the application is, it is incredibly flawed.

Nevertheless, the public can rest that Apple will continue to work on the application until it is perfected, or at least more tolerable. Unfortunately at this point, the company refused to divulge exactly what it has planned for the same. But one thing is for sure at this point, and that is that the Apple has spent a lot of time on this and will continue to do so. TV will be available on Apple TV boxes, iPads and iPhones starting December of this year.

Apple October 27 Event: Run Down Of All Announcements

Apple’s latest Mac event unveiled a lot of steller new hardware from the Cupertino-based company, including a new MacBook Air and the 2016 MacBook Pro.

The 2016 MacBook Pro: Specs, Features, Release Date And If It's Worth The Buy

The MacBook Pro finally received its long overdue facelift. But with its accompanying price, is the updated device worth the buy?