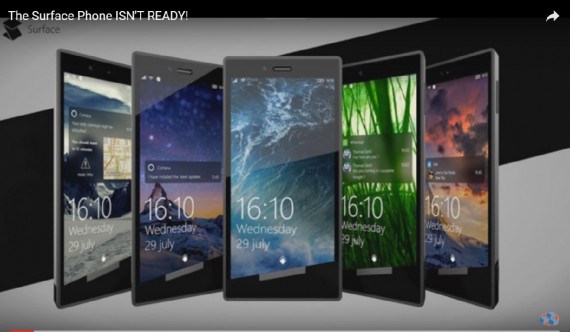 Microsoft's upcoming Surface Phone is said to be able to save the Windows 10 Mobile from its state. (Photo : The Windows Dev/YouTube)

Microsoft will be launching a new phone, the Microsoft Surface Phone and it is said to compliment Microsoft's Windows 10 Mobile. But will it be able to save the Windows 10 Mobile from its bad reviews when so many predecessors have failed to do so?

According to a written article at Vine Report, one of Microsoft's boldest ambition next year is the introduction of a new lineup of Surface phones, which will be bannered by three different variants. Though there have been so many rumors and speculations about the premium quality and collection of the specs of the said smartphone, there have been no confirmation of those sources' from the American tech giant, Microsoft.

Based on all the rumors and speculations surrounding the Surface Phone, critics believe that Microsoft is trying to build something that has the internal stuff reminiscent of a laptop, but wrapped in a mobile device. But with the latest success on how well the Surface Studio was received from fans and critics, it is not an impossible feat for Microsoft to deliver this project.

Earlier this month, Microsoft has just created a robot that reaches "human parity" on a level that could be called as a historic achievement. We might be able to see that technology applied in the new Surface Phone.

About how the Surface Phone can save the Windows 10 Mobile from its devastating state, here are some of the reasons listed at Digital Trends on how it can be possible:

Through the years, Microsoft has released numerous updates and with Windows Phone being rebranded as Windows 10 Mobile, there was no phone that could really carry it. Even with Lumia 950, that had hardware on par with the very best Android competitors could not deliver, that is until the long-rumored Surface Phone appeared.

Surface Phone Is Made For Windows Mobile 10

According to an interview at Digital Trends, back in December, Chief Marketing Chris Capossela admitted that they needed more breakthrough work. From that interview, it was clear that Microsoft was really trying to create a smartphone that was intended for the Windows 10 Mobile. All those previous phones that tried to adapt with the Windows 10 Mobile were just trials that would lead the Windows 10 Mobile to its true partner, the Surface Phone.

Samsung Is Already Making Promises About The Samsung 8, Can It Deliver?

Samsung will launch its S8 next year, which leaves the public wondering if the new flagship can save the company from its crisis.

Many people really do crazy things to get an iPhone 7.