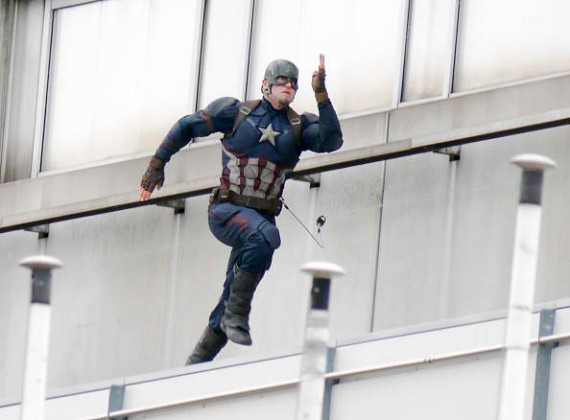 BERLIN, GERMANY - AUGUST 12: A stuntman dressed as Captain America is seen during filming on the set of Captain America, Civil War on August 12, 2015 in Berlin, Germany. (Photo : Photo by Chad Buchanan/GC Images via Getty Images)

The movie world these days is obviously dominated by countless superhero films. With the trend probably started by "Superman" and "Batman" franchises, these films gave birth to more DC and Marvel superhero movies where "Captain America," "Iron Man," "Catwoman," "Deadpool" and more have received notable praises. Today, the trend continues as DC and Marvel are bringing to life almost all of its comic characters, announcing left and right movie premieres that will come to cinemas from 2017 up to 2020.

The coming-to-life of countless comic book heroes and villains has indeed broken several box office records. The improved visual effects and the stunning actors who give life to the characters have certainly played a big role in why superhero movies are now the most lucrative films in the movie industry.

While there are practically a thousand actors/actresses out there who can play the hundreds of hero and villain characters adapted from comic books, there seems to be these ten favorite Hollywood stars who have frequently played as a superhero or villain in different movies. Who are they? Let's find out.

Before Affleck became the man behind the bat suit in the 2016 DC film "Batman v Superman: Dawn of Justice," he first gave life to another DC superhero, Daredevil. In 2003, Affleck played as the blind, multi-skilled Daredevil which is said to be more given justice than his Batman role. This is probably because Christian Bale did Batman better than Affleck.

You may not recognize Jones that much, but maybe you would remember him doing Silver Surfer in the 2007 DC film, "Fantastic 4: Rise of the Silver Surfer." Yet before he played Silver Surfer, he was the sidekick Abe Sapien in 2004's "Hellboy." He also reprised his role in the sequel "Hellboy II: The Golden Army."

OK, so here starts the reign of Marvel. Who doesn't know Captain America? Chris Evans played the hunk Captain Rogers first in "Captain America: The First Avenger" in 2011. He then returned to amaze fans in "The Avengers" in 2012, "Captain America: The Winter Soldier" in 2014, "Avengers: Age of Ultron" in 2015, and "Captain America: Civil War" just this 2016. Yet before he became busy playing the noble soldier character, he first became the less-behaved Human Torch in DC's "Fantastic Four" in 2005 and "Fantastic 4: Rise of the Silver Surfer" in 2007.

Another from Marvel is Jackson who plays as Nick Fury. He definitely kills it as the head of SHIELD who also appeared in all "Avengers" films, appeared twice in "Captain America" franchise, and played a role in "Iron Man 2." However, his very first appearance in the Marvel movies was in the post-credits of "Iron Man" in 2008. And again, before becoming Fury, Jackson first became Mr. Glass in a non-DC and non-Marvel film "Unbreakable" in 2000 and the villainous Octopus in 2008's "The Spirit."

It seems like Jackson and Johansson are inseparable as they appeared together in so many films. Among Fury's agents, Natasha Romanoff (Johansson) seems to be most loyal to him, appearing in every film where Fury also played a role. And the fun trivia here is that Johansson played as Jackson's partner in crime as Silken Floss in "The Spirit."

Another from the Marvel Cinematic Universe is Taylor-Johnson who played as Quicksilver in "Avengers: Age of Ultron." He was first seen though in "Captain America: The Winter Soldier" in a mid-credits scene. Before he rocked theaters as Quicksilver, however, he was first known as Kick-Ass in 2010.

The 2004 film "Catwoman" marked Berry's first role as a superhero. While she was smoking hot in her leather costume in "Catwoman," she kicked it better in a more solid superhero franchise which is obviously the "X-Men" series where she played Storm.

Smith is pretty popular in playing the titular character in the film "Hancock" which was released in 2008. However, Hancock is not based on any comic book. Regardless, that all changed when he played as the supervillain turned hero (or not) Deadshot in the 2016 DC film, "Suicide Squad."

Reynolds seems good at acting out a comic character. He was first the macho DC superhero Green Lantern before he jumped into the shoes of another comic character, but this time he is an antihero. Marvel took Reynolds to play as Deadpool earlier this 2016. However, you might also remember him taking another Deadpool role in the abysmal "X-Men Origins: Wolverine."

Finally, we end this list with this multi-talented actor, Carrey. He was very well-known for his role in the 1994 film "The Mask." He may not be a hero in the said film, but the movie was based on a similarly titled comic book. He, however, played more villainous characters such as Colonel Stars and Stripes in "Kick-Ass 2" and The Riddler in "Batman Forever."

The blockbuster movie "Suicide Squad" releases an "Extended Cut" version which will be available on Digital HD DVDs and BluRay, coming this Nov. 15 and Dec. 13.

Ben Affleck, the actor-director of the upcoming Batman film, revealed he is currently working on the script of the film which he tentatively titled "The Batman."

After attending a recent event, Halle Berry sparked rumors that she may be pregnant but quickly denied it before it went out of hand.

'Aladdin' Live-Action Remake Is Going To Be A Musical; Will Smith To Play Genie?

Guy Ritchie gives cast updates as well as their direction on the ongoing production of the awaited live-action remake of "Aladdin".

Chris Evans Bids Farewell As Captain America: What's Next For "The Avengers"? Details Inside

During his recent sit-down interview, Chris Evans has seemingly confirmed that he will exit Marvel. With that, rumors are now surfacing that Captain America may literally bite the bullet in time for Chris Evans to exit the MCU.