'Yuri!!! On Ice:' Why You Should Watch This Anime Series Despite Its Yaoi Tendencies 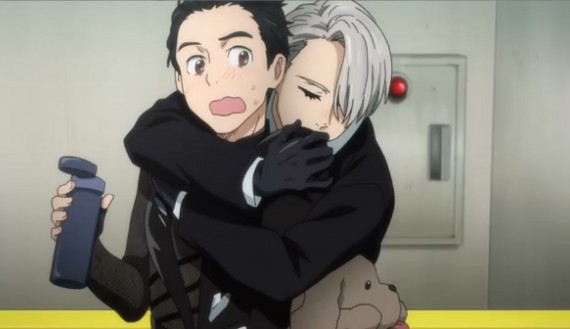 Yuri refers to a manga/anime genre involving love between women, but opposite of what fans are expecting after the show's title was announced, "Yuri!!! on Ice" subtly features love between men not women. Although it is not directly categorized as Yaoi, viewers can easily spot many Yaoi fan service scenes in the series.

Let me give you some examples. Do men blush while talking to each other? Well, in "Yuri!!! on Ice," they do. It gives viewers a feeling that they really like each other, especially Yuri and his coach, Viktor. It has a lot of Yaoi lines like Viktor telling Yuri: "Seduce me with all you have," and the most infamous line: "It's enough to make even me, a man, pregnant! Such eros!"

Yuri has long admired his coach, Viktor, as an athlete but Viktor's gestures towards Yuri are very sweet that it can be easily mistaken as romance. He keeps on bothering Yuri that they should sleep together in one room and speaks to him at 1cm face distance. When Yuri won against his Russian namesake Yuri Plisetsky, the Japanese Yuri announced he would try winning the Grand Prix while Viktor supported him in the shoulder. Yet, the anime's depiction of the scene feels like it is something a lover would do. (Still, that is one of my favorite scenes!) In episode 5, that back hug from Viktor was really sweat as he noticed Yuri was very nervous from the competition, not minding the cameras were flicking at them. I'm not an Yaoi fan but that scene actually got me squeeling alone in my room like an idiot. There was no direct "I love you" but in the last scene in episode 5, Yuri described the love he receives from Viktor, his family and his hometown.

Lastly, there is a noticeable lack of girls in the series. The only available girls I've seen in the five episodes so far are Minako Okukawa (but she is Yuri's teacher) and the one who wrote Yuri's music track (she was shown for only approximately five seconds that I can't even remember her name).

The anime is really a treat for Yaoi fangirls but still some anime fans are confused especially in the "gayness" surrounding the show. If you haven't decided to watch "Yuri!!! on Ice" yet, here are some reasons to push through with this anime:

The story revolves around Yuri Katsuki, a 23-year-old professional figure skater who experienced a slump after a crushing defeat in the Grand Prix Finals. However, his life changed when his idol, Russian living legend in figure skating Viktor Nikiforov, saw his performance video and decided to be his coach. Together, the two would conquer the next Grand Prix. The story itself is very interesting, the anime is topping various streaming sites, not to mention it is an original. There's nowhere in the world you can see another story like this, not in a manga series or light novel.

Figure skating-themed anime are not usual. "Yuri!!! on Ice" is a real treat for sports enthusiasts and figure skating fans to see some really awesome figure skating stunts. Even those who are new to figure skating will surely love it especially when the characters do special techniques like flips, spins and quads.

Unlike other sports anime series where the last five seconds of a quarter are featured in seemingly unending minutes and one set of a ball game sometimes ranges to up to five episodes, "Yuri!!! on Ice" is moving at an unbelievably fast pace. In the next episodes, Yuri would be going to different countries to compete and based on the current pacing, each country competition would be done in only one episode.

I love it when the characters are turned to cute chibi forms, especially when Yuri became overweight and his fat was leaking from his clothes -- that was really funny. Yet the characters' natural appearances are also cute. Viktor has somehow a playboy image but sometimes he behaves like a child especially when his mouth turns to a heart shape. Yuri (the Japanese one) is very timid and has low self esteem but his "On Love: Eros" performance is the epitome of manliness. On the other hand, the other Yuri (Russian) is prideful but he has a weird love for tiger printed fashion.

'March Comes In Like A Lion' Live-action Movie Updates: First Trailer And Poster Released; Two-Part Movie To Premiere On March 18 And April 22

Japanese fans will see "March Comes In Like A Lion" live-action film on March 18 And April 22, 2017. A first glimpse of Rei's everyday life was featured on the movies first trailer and poster released recenlty.

Interesting Sports Mangas That Should Definitely Be Adapted Into Anime Series

Sports series with seemingly weak but actually very skillful heroines are good inspirations. Here are some sports mangas that are good enough to be adapted into anime series.

Must-Read Webtoons And Manhwas That Are Made Into Korean Dramas