Donald Trump Wins The 2016 Presidential Election: Will This Be The End Of The Tech Industry? 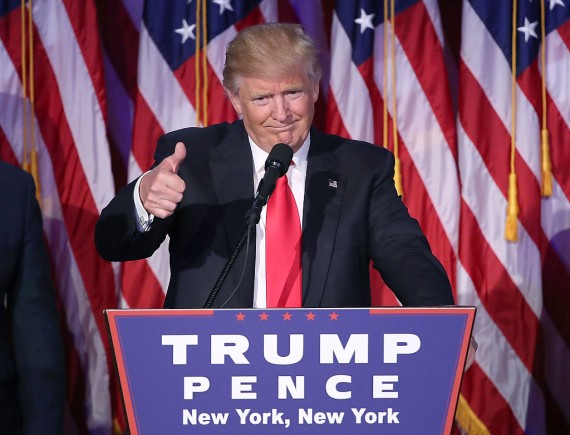 Donald Trump has won the race for Presidency in the United States. Though this cause for a celebration for the American people, tech companies are worried about what is to come for the tech industry.

According to a written article at CBR Online, earlier in the year, Apple faced a court order that would require its assistance in unlocking an iPhone that belonged to one of the killers involved in the San Bernardino mass shooting. However, Apple refused to cooperate and Trump (not yet elected at the time) told the general public during at a rally in South Carolina to boycott Apple until they give their cooperation. He then said, "I would come down so hard on him (Tim Cook, Apple CEO)-you have no idea - his head would be spinning all the way back to Silicon Valley."

Now that Donald Trump is President-elect, people believe that though President-elect Trump may not have any ill feelings for the tech company, they worry what would happen if a similar case will show and will need the assistance of a tech company. Will he ask them kindly or will he use his new power to force the company to assist them?

President-elect Trump also said that he plans to order an immediate review of all U.S. cyber defenses and vulnerabilities, including critical infrastructure by a Cyber Review Team of individuals from the military, law enforcement, and the private sector. This idea can be traced to President-elect's reaction to the terrorist group ISIS.

In the article at On The Issues, President-elect Trump also suggested to close up the Internet. Trump believes that cyber warfare is also something that we should be very careful of. A very good example of the cyber warfare is what ISIS is doing. In his defense, ISIS is recruiting through the internet and is using it better than the Americans are using it. And the irony of it is that it was the Americans who created it, yet America is suffering from cyber-attacks.

Though this may be a good idea to fight off terrorism, some tech companies are worried about this idea. If this is implemented, then companies that rely on the services provided by the internet may same irrelevant.

There is also another problem if the internet is closed. Information may not be properly circulated which may lead the public limited access to information. It is believed that many people don't believe the media in the television and would rather read news on independent freelance sites.

But in regards to the media, President-elect Trump aims for net neutrality. According to the CBR Online, Trump said in a tweet: "Obama's attack on the internet is another top-down power grab. Net neutrality is the Fairness Doctrine. Will target the conservative media."

Lastly will be about infrastructure. President-elect Trump plans to transform America's infrastructure and create jobs in sectors such as telecommunications and to bring new technologies in things like the transportation system. Examples if such are the state-of-the-art pipeline, advanced in maritime commerce, and next generation vehicles.

Whether the American people agree with what President-elect Trump plans to do with the country, many people still question if he will stick with his promises. Deny it or not, many people don't really trust the government due to its nature of running things.

Actor Ian Somerhalder who is a strong advocate for the environment and animal rights opposes Donald Trump's views. Thus, actor says if Trump wins the elections, he may consider leaving the country.

2016 US Election Results: How To Deal With Stress

2016 US election results will bring in a lot of stress for the candidates and the commoners as well. Here are some ways to deal with it.

Is President Donald Trump A Threat To The Environment?

President Donald Trump and his policies may harm the environment. Here is why.

Trump opposes U.S. plan to cede control of the internet.