Dragon Ball Xenoverse 2 Guide: List Of Bronze To Platinum And Secret Trophies And How To Get Them 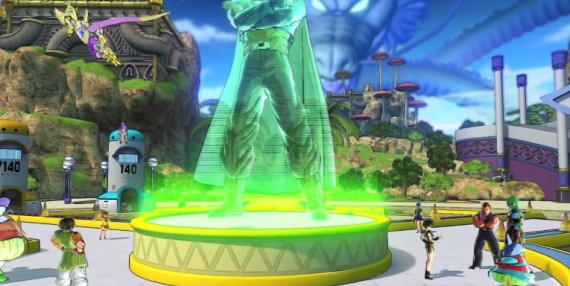 Want to know what trophies you can get in Dragon Ball Xenoverse 2? Read our full list and how to get them guide here. (Photo : Photo by Bandai Namco Entertainment America/YouTube)

Dragon Ball Xenoverse 2 offers just the right amount of fighting and exploring. There are lots of trophies that can be obtained by unlocking certain items, completing quests or reaching certain achievements. The majority of these trophies are Bronze and only one is Platinum. Wondering what these trophies are and how to get them? Read on to learn the full list.

Complete the following to earn Bronze trophies: "Raditz's Attack" for "Prologue to Battle!," "The Saiyan Threat" for "The Saiyan Legend Reborn!," "Ruckus on Planet Namek" for "Dawn of the Fierce Battle," "The Ginyu Force Strikes" for "Frieza's Secret Weapon!," and "The Galactic Emperor" for "Awaken Warrior of Legend."

You should also complete "Android Warfare" for "Successor of the Strongest," "A Desperate Future" for "The Spirit of Goku is Forever!," "Decisive Battle with Majin Buu" for "Seize the Future!!," "God of Destruction's Anger" for "The Battle of Gods Concludes!," and "The Emperor's Return" for "Despair Once More!"

Passing the Easy Class and Kai Class tests should also get you the Bronze trophies "Prepare to Die!" and "It Won't Be Enough to Kill Me!" respectively. You'll get "I Summon You Forth: Shenron" for gathering all seven dragon balls and summoning the legendary dragon successfully. Play an online battle for the first time will get you "How About a Little Warm-up?" and visiting all stages will award you the "You Really Get Around!"

Speaking of first times, ride a vehicle and get the "In a Rocket Built for One Person" trophy. Visit the Kame House and get "Hello!" Create a QQ Bang and get "Shut Up and Put This on Your Right Ear!" Unlock an attribute boost and get "Allow Me to Awaken This Power for You." Interact with the time miniatures in all Bases and get "Focus Hard - Not on a Place, But on a Person." Lastly, repel a super Ki Blast and get "See You Later!"

Considered as a very rare Bronze trophy, "That Stone Might Be a Decoy! Let Me Check It" can be had by completing ten training sessions from Yamcha. "Tra La La La La La!," which is another rare trophy, will be awarded once you complete ten training sessions from Krillin this time. Collect half of both skills and equipment will get you "People of Earth, Please Lend Me Your Energy!" and "The Bad Guys Always Wear the Coolest Clothes," respectively. Completing over half of all Parallel Quests will then get you "You're Not Worthy of Fightning Me!"

Also, winning endless battle seven times will give you the "Of All My Fights You're My 2nd Strongest Foe" trophy and completing seven expert missions will produce "If I Don't Do It, Who Will?" Cause the birth of a Majin and get "The Most Powerful Majin is Born." Join the Frieza Force and get "You Wouldn't Want to Work for Me, Would You?"

For the last batch of Bronze achievements, there is the "Super Saiyan God Super Saiyan" trophy for reaching level 80. "Take Care of Your Mom for Me..." will be awarded when you free every ally who was mind-controlled and "We Better use the Hyperbolic Time Chamber" when you finish all Challenge quests. Viewing the nickname list and collecting half of these nicknames will get you the "You Can't Destroy What I Really Am!" Lastly, "My Stomach Hurts" will be given to you when you receive an SP Reward from Hercule.

There are a total of 11 Silver Trophies, according to Saiyan Island. Completing the instructor's lessons, all expert missions, and clearing all Parallel Quests will get you the trophies "You're Like the Son I Never Had," "You Really Are A Hero," and "You're the Second Foe to Push Me This Far!" Win online seven times to get "Victory is Mine!" and pass the Super Class test to get "Want to Be the Next God of Destuction?"

Unlocking all characters and variations will also get you a Silver Trophy called "I've Come For You!" After causing a Majin to be born, cause it to change so you can have "I Feel a Little... Different!" Once you've joined the Frieza Force, you will eventually have to be his second-in-command to get the "I'll Make You Commander of the Frieza Force" trophy.

The oddly named "Takkaraput pop porunga pupiritt paro!" achievement can be obtained by powering up Shenron's wishes. Moreover, you can have the somewhat common Silver trophy "The Righteous Must Flourish!" by defeating all the villains after being a student of the Great Saiyamen. Lastly, get the prideful Vegeta to acknowledge your strength and achieve "You're Number 1!"

There is only one Gold trophy that is not a secret: "Over Here, Slowpoke." You can get it by learning all the Awoken Skills of your race from the time rifts. The Platinum trophy, which is ultra rare, can only be obtained when you get ALL possible trophies: "Bye Bye, Xenoverse."

The two secret trophies should also be obtained to get the only Platinum trophy. "Defiance in the Face of Despair!" is Bronze level and is awarded by completing the "Unknown History." The other of the two Gold trophies, "Goku's Dream is Super-Huge!," can be obtained by watching the ending sequence.

Overall, there are a total of 50 trophies you can get. Silver trophies are hard enough, but some of the bronze trophies are also hard to get without putting effort. Be the ultimate Dragon Ball Xenoverse 2 gamer by garnering all these trophies and achievements. Meanwhile, head on over to our guide to picking a character here.

SSGSS (or Super Saiyan Blue) Goku and Vegeta are some of the best, if not the best, characters of the game. Learn how to get them here.

Each Dragon Ball Xenoverse 2 race has a unique super transformation. Find out which one you can unlock by choosing Majin, Saiyan, Earthling, Namekian or Frieza!

Dragon Ball Xenoverse 2 has five races to choose from. Will you be an Earthling, Majin, Namekian, Frieza or a Saiyan?

At last, Bandai Namco has confirmed the exact Switch release date of Dragon Ball Xenoverse 2. The game's publisher also shared some details about its contents.

Bandai Namco is rolling out a new DLC for Dragon Ball Xenoverse 2 soon. It will also release a Nintendo Switch version of the game in Japan this September.