Peter Thiel Will Join Trump´s Team: What Could This Mean For Tech World And Silicon Valley? 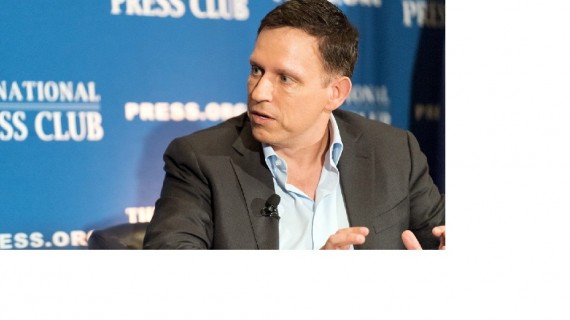 Peter Thiel ideology is totally opposite to Silicon Valley´s, which could create a strong disagreement in several issues.<br /> Mark Zuckerberg was one of the few members of the tech center who respect his political stance. (Photo : Youtube/ National Press Club Live)

When he made a speech at the Republican National Convention and donated $1.25 million to Donald Trump´s campaign, Silicon Valley declared its war against him, giving the fact that he was the only member of the tech center who openly showed his support for the republican candidate. Now, it has been reported that Paypal Co-founder is joining Trump´s team, and could be the one who advised trump on technology.

According to The Verge, even when it is not known which capacity he will operate in the team, his power in the tech world would be higher than ever, turning him into someone that could represent a new beginning of controversial relations between Silicon Valley and the White House, considering the tech center position towards Trump, and how Thiel has never been precisely the most popular member of it.

Although there have been rumors that his new position might be threatening for the tech world, the truth is that Peter Thiel might be one of the good news regarding Donald Trump´s election, considering that the German-American has been characterized for knowing the tech business backsides perfectly well.

Before he was chosen as the new U.S. president, there was a general worry about what could happen with the tech world if Trump was elected, considering that believes that he doesn't have the proper knowledge of this matter, so the greatest companies could feel secure with him as chief of state.

However, with Thiel on his team, what could have been considered as an apocalyptic scenario, now could be seen as "business as usual", since it doesn't seem likely that the Paypal Co-Founder could support any kind of policies that somehow means something harmful for the tech world and its multi-billionaire economy.

The Link Between The Tech Center And The Government

In fact, Thiel could actually represent a reliable link between Silicon Valley and the White House, considering that even when the tech center has strongly criticized Donald Trump, there´s some measures that both parties approve, like lower the corporate tax rate from 35% to 15%. Also, Thiel could be a Silicon Valley ally in the Trans-Pacific Partnership issue, which Trump has vehemently opposed and the tech center supports, giving the fact that this could provide a balanced intellectual property framework, and keep the borders open to the free flow of data.

Nevertheless, Peter Thiel´s ideology and points of view in different issues are not the same as Silicon Valley, which might be the only problem. In fact, the tech center didn't saw with kind eyes how the German-American capitalist backed Hulk Hogan in his lawsuit against Gawker media, which ended up in its closure.

Thiel´s Uncertain Position In Some Issues

Actually, there are some Trump´s intentions that could be damaging to many companies in the tech world, and Thiel´s position might be uncertain. According to the BBC, one of these issues could be AT&T-Time Warner deal, which Trump has openly claimed that he would fight against the acquisition, in order to prevent "too much concentration of power".

Other intentions that Trump has expressed and Thiel must deal, are Amazon´s future, net neutrality, foreign talent import, privacy and encryption, and the future of energy tech, which has been one of the long-term innovations that Bill Gates has urged the next U.S. president and world leaders to prioritize. Although it is not known how this issues would end, Peter Thiel´s position in Trump´s government could be good news for Silicon Valley and the tech world.

Russia Confessed They Might Have Helped WikiLeaks With Clinton´s Emails

It is not known if this is true, or is just an effort to create more controversy on Trump´s election. The U.S. blamed Russia of being behind WikiLeaks´s operation against Hillary Clinton.

How Much WikiLeaks Helped Trump To Win The Elections ?

What will Trump do with WikiLeaks and Julian Assange once he start his new role in the White House? The U.S government has blamed the non-profit organization of interfering with the elections.

Top 3 Epic Social Media Posts From The US Presidential Elections

We play tribute to this year's elections played host to a number of epic social media posts and gaffes.