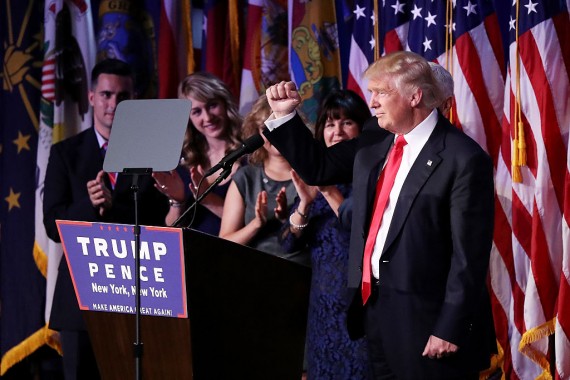 How harmful could be a tweet or a Facebook post now that he´s the new U.S. president?<br /> Although he succeed an impossible mission by controlling social media during the campaign, now is way more difficult.<br /> (Photo : Photo by Joe Raedle/Getty Images)

Without social media Donald Trump´s ambition to become president would probably end up being smashed in a big wall at the Republican primaries, considering the way he managed to use platforms such as Facebook and Twitter to spread his message and being under the spotlight and in the center of the news every single second of every single day. If something characterized this man during the elections, it wasn't only his controversial messages and promises, but his way of knowing how to calculate every detail to make everyone talk about him.

There are naturally much more reasons why he becomes the American chief of state, but being a strategist that knew when and how to make a notorious post was his trademark during the elections, to the point where he showed how taking advantage of social media can get you to unsuspected positions. It was a masterclass whose intentions behind wouldn't be materialized if these platforms didn't exist, giving the fact that traditional media couldn't give him the enormous space he demanded with his actions.

Actually, it was reported that the incoming president said that Facebook and Twitter helped him for getting elected, explaining that social media "does get the word out", and confessing that it represents "a method of fighting back" against the traditional media, which confirms how these platforms have changed practically the world order. Now the big question is: how will he use his Facebook and Twitter account from now on?

He Managed To Became A Social Media Phenomenon During The Campaign

When he was still a candidate and many media told that it was impossible for him to become president, he was extremely controversial and posted a lot of contents that constantly made people to talk about him, which creates a polarization between people that loved him and hate him. Trump became a social media phenomenon that everyone underestimated, thinking that his divisive comments would take him nowhere.

He messed with anyone he wanted, he made bigot statements, he retweeted posts from the wrongest people and even get to the point of posting an image in which there were some Nazis. This was extremely effective for him, but he only was a presidential candidate that could make this actions without having a bigger problem than generalized criticism and accusations of racism or sexism.

Now that he´s the president-elect, it is not known how he will use his Twitter and Facebook accounts, considering that he´s in a position where he has no experience, but it is unlikely that he will remain to be the troll he was. In fact, he recently told that he would be restrained in his social media, adding that he might use it once in a while.

Although it sounds like a crazy statement coming from an outsider that got to the White House mainly because of these platforms, it is probably that he actually only use his Facebook, Instagram, and Twitter account in a political and diplomatic way, no matter how radical he might be, considering that his mistakes are going to be oversized and strongly criticized since day one.

However, the most likely scenario is that he will inevitably post something outrageous at least once. Nevertheless, restraining the use of these platforms could be a very rational decision for him, given the fact that social media is an incredible power that just as helped him to get elected, it can also destroy him in this new position.

Although social media are almost impossible to control, being a candidate is way different that being chief of state, which makes less risky posting the wrong comment. If he manages to keep using these platforms for his interests and end up getting away with it, Donald Trump could be considered the Machiavelli of recent times but is not likely to happen.

Do you image him making sexist jokes about Angela Merkel on Facebook, or posting a poorly photoshopped image in Twitter criticizing Francois Hollande? Probably not, but he will definitely keep being the center of attention even when he doesn't post even the half of content that he used to. The big difference now is that social media are more dangerous for him than never before. What was his main ally during the campaign, now becomes the biggest threat.

Peter Thiel Will Join Trump´s Team: What Could This Mean For Tech World And Silicon Valley?

Peter Thiel ideology is totally opposite to Silicon Valley´s, which could create a strong disagreement in several issues. Mark Zuckerberg was one of the few members of the tech center who respect his political stance.

Russia Confessed They Might Have Helped WikiLeaks With Clinton´s Emails

It is not known if this is true, or is just an effort to create more controversy on Trump´s election. The U.S. blamed Russia of being behind WikiLeaks´s operation against Hillary Clinton.

It is not known how Zuckerberg and Trump´s relations could be, and how this could affect his reputation in Silicon Valley. Zuckerberg openly showed his support for Hillary Clinton in the elections.