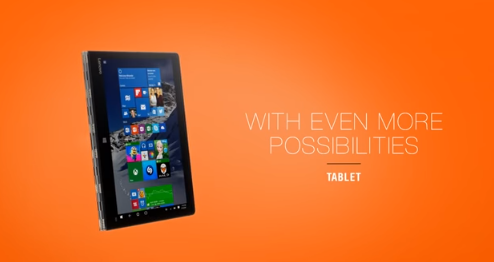 Both Apple and Lenovo's laptops are uber-powerful. However, the MacBook Pro might just be more expensive. (Photo : Lenovo / YouTube)

When Apple released the new MacBook Pro, there has been quite a mixed reaction from the crowd. There are people who are happy with the company's creation but there are also people who think that there are far better laptop deals than the MacBook Pro 2016. So, how does Apple's latest creation compare to other laptops? Let's compare it to another premium laptop device to find out. Here's MacBook Pro 2016 versus Lenovo's powerhouse Yoga 900 device.

The MacBook Pro 2016 isn't really a bad laptop. In fact, it is also a very powerful device that's powered by Intel's fastest chips. The only drawback about this edition is perhaps its price. It's worth noting that the MacBook Pro 2016 comes in three variants and the lowest model is priced at $1499. You might have heard of the MacBook Pro's new Touch Bar feature. However, you should know that the $1499 version doesn't have this feature, Tech Radar reported.

The lowest MacBook Pro 2016 variant is a simple 13-inch laptop with a Core i5 2GHz processor, 8 GB worth of RAM and 256 GB internal storage. It's not that bad of a deal actually. It's just a tad more expensive than similar laptops on the market. It also doesn't have the MacBook Pro 2016's key selling feature which is the Touch Bar, so it's kind of hard to choose it over others. If you want the Touch Bar variant, you can get the one priced at $1799 (13-inch) or the one priced at $2399 (15-inch). Do take note, however, that only the 15-inch variant is Core i7 powered among the three.

You might have heard before that the MacBook Pro 2016 is powered by a Core i7 processor and boasts of a Touch Bar. However, among its three variants, it's only the 15-inch model that's boasting of these two features. Since it's the most premium model, it's got bigger 16 GB RAM as well. Nevertheless, all three models have USB C ports. It's just that the lowest model only has two of it and the next model has three of it. The most expensive variant boasts of four USB C ports.

Needless to say, the costs mentioned above are just starting prices. Apple allows buyers to choose between different configurations so price still varies. Just to give you an idea as to the extent of the costs for a MacBook Pro 2016, take note that prices can reach around $4300 if you want the ultimate version of Apple's 2016 laptop.

Lenovo is already a household name when it comes to computers and electronics. As of recent years, the company has also been made popular by its wide range of convertibles. Convertibles or 2-in-1s are laptops that are designed to transform into a tablet. These devices either have detachable keyboards or 360-degree hinges that allow for full keyboard folding. The Lenovo Yoga 900 rotates 360 degrees and folds to a tablet form.

The Lenovo Yoga 900 boasts of its slim and lightweight body. It's just 2.8 pounds and less than an inch thick. It's pretty perfect for people on the go. Since it is convertible, it does have a touchscreen, which makes it a joy to work with. Unlike traditional laptops, this convertible hybrid has maximized portability. All this is done without compromising power. It's a Core i7 powered laptop and it's also a fully functional tablet.

If the battle is between MacOS and Windows, a person just got to follow his/her preference. If you're a MacOS user, then there's no doubt, the MacBook Pro 2016 is the upgrade you might be waiting for. If you're a Windows guy, you might find Apple's new laptop a big splurge. Clearly, there are options that are less expensive than the MacBook Pro 2016 but without major compromises.

The Lenovo Yoga 900 is one good example of this. Not only did it not sacrifice anything for a lower price, it also has more major features than the MacBook Pro. It is a convertible device and it comes with a touchscreen display. Basically, it's Touch Bar versus touchscreen and it's easy to say that a touch-display is quite more relevant. For a few hundreds of dollars less, you'd get a faster processor and maximum convertibility.

The Microsoft Office is now optimized for MacBook Pro with Touch Bar usage.

There have been a lot of issues that the Macbook Pro 2016 is currently facing. From its keyboards to its speakers, some are looking for answers on how would they resolve it.

The latest beta of MacOS Sierra introduces a new option to Mac's battery menu that will reduce the brightness of the display if it is above 75 percent, extending battery life.