Best Samsung Midrange Phones Available In The US 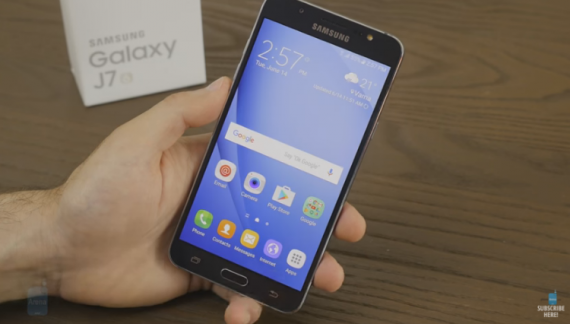 There are a number of good and affordable Samsung midrange phones available in the US. (Photo : PhoneArena / YouTube)

The problem with smartphones is that not every model is available in every country. Sure, companies like Samsung manufacture tens of new smartphone on a regular basis. However, not all of it is available in your country. People located in the US do have troubles getting some of the best Samsung phones that are only released in China, South Korea and even in Southeast Asia. Most people get hyped up by news about new affordable Samsung phones but as it turns out, these phones aren't coming to the US. To help you steer away from disappointments, here are some of Samsung's affordable phones that you can surely get in the US.

The new Samsung Galaxy J7 has been released April this year. It is a 5.5 inch smartphone with 720 x 1280 pixel resolution running Android Marshmallow from the box. It is powered by Snapdragon 617 and it comes with 2 GB RAM. The Galaxy J7 2016 has a native storage of 16 GB but it can always be expanded through its 256 GB microSD slot. The phone has a 13 MP rear cam and a 5 MP front cam that both have LED flash.

As per Phone Arena, the Samsung Galaxy C7 is now open for pre-orders through B&H. This phone was launched in China a few months back and was actually supposedly locked to that country alone alongside the rest of the Galaxy C smartphones. However, as it turns out, the Galaxy C7 will also be released in the US. As per the source, B&H listed the phone with a $459 price tag and with Gold and Gray as its color options.

Last year's model of Samsung Galaxy J5 is 5-inch in size and comes with a modest 720 x 1280 pixel resolution. It runs Android Lollipop from the box but it can be upgraded to Android Marshmallow 6.0. The Galaxy J5 is powered by Snapdragon 410 and it comes with 8 GB or 16 GB worth of internal storage and 1.5 GB worth of RAM. This phone also has a 256 GB capacity microSD slot. The J-series is known for its front and back camera flash and the J5 isn't exempted from this. The phone has a 13 MP rear cam and a 5 MP front cam. Both come with LED flash.

The Galaxy Core Prime is yet another older model from Samsung's midrange phones. It may be quite old but that only means that you can snag it at a better price. This phone is smaller than most phones as well, so it is quite perfect for people who want a lighter option. It has a 4.5 inch display with 480 x 800 pixel resolution. It runs KitKat from the box but can also be upgraded to Android Lollipop. The Galaxy Core is powered by Snapdragon 410 and comes with 8 GB internal storage. For the RAM size, GSM Arena's sheet says it's 1 GB. A 64 GB capacity microSD slot is also included alongside a 5 MP/ 2 MP camera combo.

Samsung Galaxy C: Could Be The First Samsung Phone To Feature Dual-camera Before Note 8

Samsung is reported to announce a smartphone that will feature a dual-camera and that new feature might go to a new Galaxy C model.

Rumors No More: Samsung To Launch Galaxy J5 And J7 In India Today

The new Samsung Galaxy J5 and J7 are out in India today. These phones have great specifications that customers should look forward to.

Efforts to revive its once stellar smartphone fortunes may be doomed if Samsung Electronics cannot overcome its dominant engineering culture.