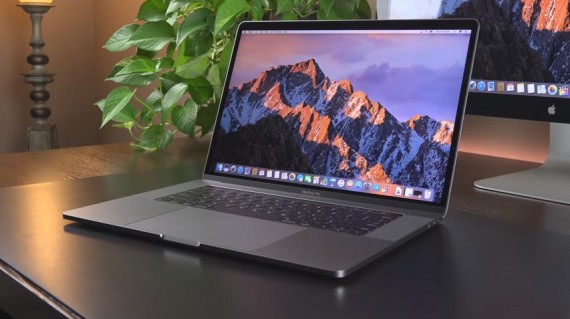 Apple just released a new ad, entitled “Bulbs,” which features the 2016 MacBook Pro and dubs it the “tool for all the ideas to come.” (Photo : DetroitBORG/YouTube)

When Apple officially announced the 2016 MacBook Pro, the tech world - particularly the Apple loyalists - breathed a sigh of relief. Apple had finally upgraded its most popular choice in its Mac lineup. And the Cupertino-based company is definitely proud of its newest offering, as proven by the recent advertisement that dubbed it the "tool for all the ideas to come."

The one and a half minute ad starts with a man striking two rocks together to create a spark. Afterward, the scene blinks to a street that is empty except for a perfectly straight line of light bulbs. When the spark is ignited, the first bulb explodes. What follows are images of mankind's best inventions and findings - from fire to a steam engine, and the typewriter to the computer - broken of, by the line of light bulbs exploding one by one.

At the end, it simply says, "Ideas push the world forward. Introducing a tool for all the ideas to come." What follows is, of course, an image of the 2016 MacBook Pro. On its display is one of those lightbulbs that explode. An anonymous hand then uses the all new Touch Bar to rewind and fast forward that same video.

That advertisement is simple and definitely gets the idea across. And it works a lot better than its older advertisement, which put the iPad directly against the Surface Pro 4. At least no other company can push back with an ego-busting advertisement - unless Microsoft has another killer idea under its sleeve.

Going back, the whole premise of the commercial is that the 2016 MacBook Pro is an idea and an invention that can be likened to the telephone or the camera, which have been the tipping point of so much more. But does the new offering from Apple actually have this much potential, even in exaggerated means?

The 2016 MacBook Pro, as reported by Apple, has a 15.4 inch LED-backlit display with IPS technology. It has a 2880 x 1800 pixel resolution at 220 pixels per inch. It also sports a 2.7GHz quad-core Intel Core i7 processor. This is paired with a Radeon Pro 455 with 2GB of GDDR5 memory graphics card and is available with 256GB of internal memory, or 512GB of built-in memory.

Apple also boasts that the 2016 MacBook Pro lasts up to 10 hours on the wireless web, 10 hours on iTunes movie playback and up to 30 days of standby time on a single charge. This is all thanks to the 76-watt-hour lithium polymer battery. But, of course, the real star of the new premier laptop is its built-in Touch Bar.

The idea of the Touch Bar is simple. It is very much like a touch screen function key that morphs depending on the opened application or system. Theoretically, it should make using the 2016 MacBook Pro easier. It should change the experience of using a Mac altogether. But at this point, there is some getting used to the technology.

Other reports and reviews claim that the Touch Bar is oftentimes more complicated than it is helpful. And while it should make working on the 2016 MacBook Pro faster, it sometimes just gets in the way. Plus the notebook itself offers a slew of other administrative issues, such as the need for multiple dongles in order to connect to other devices or accessories.

As C|Net notes, the claim that the 2016 MacBook Pro is one of the things that will pave the way forward for more inventions, is a little over reaching. At least, at this point in time, the unit is far too expensive and too similar to its predecessor to make such a claim.

While the 2016 MacBook Pro has been applauded for its features and design, there is still the question about whether or not the device is necessary and has enough improvements from its predecessor.

Apple’s upcoming iPhone 8 looks like it will take some inspiration from its Android competitors, most especially in terms of design, as all reports are indicating a larger screen, bezel-less and edgeless design.

How To Make The Most Of Your MacBook Pro's Touch Bar

The 2016 MacBook Pro's Touch Bar feature is not for everyone but these tips and tricks may just change your mind.

The MacBook Pro Touch Bar was "pwned" by a couple of hackers at the Pwn2Own 2017 event which also saw all major browsers get hacked.