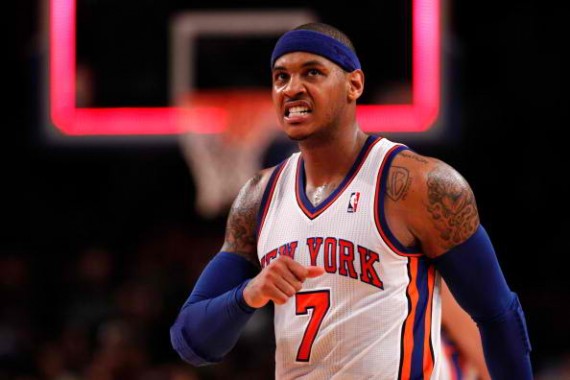 NEW YORK, NY - MAY 06: Carmelo Anthony #7 of the New York Knicks reacts in the second half against the Miami Heat in Game Four of the Eastern Conference Quarterfinals in the 2012 NBA Playoffs on May 6, 2012 at Madison Square Garden in New York City. (Photo : Photo by Jeff Zelevansky/Getty Images)

The New York Knicks are giving its poorest performance this 2016-2017 NBA season with the team landing on the eighth place in the Eastern Conference to date. With six wins against seven losses, the Knicks superstar Carmelo Anthony is rumored to kick himself out of his team to join either the Bulls or the Cavs before the current season ends.

The nine-time NBA All-Star player is reportedly frustrated with his team's performance inside the court. The Knicks have been struggling in every game they played and Anthony is the major kicker in the team. With the 32-year-old small forward thirsty for a championship title which he hasn't experienced in his 13 years of NBA career, Anthony is said to want to flee his team even if he has a no-trade clause in his contract.

The Teams That Melo Wants To Be In This Season

The six-time All NBA player is rumored to be playing it wise off-court as he wants to join his buddy LeBron James in the Cavaliers. The said team is currently first in the Eastern Conference and with a few more games left, the smell of victory for the Cavs is once again stronger.

Anthony has been in the headlines in the past days as he confirmed that he is not in favor of the Knicks' president Phil Jackson's triangle strategy. With Derrick Rose, Courtney Lee, and Joakim Noah joining Anthony, Jackson has had a lot of things to say about how his roster should play, and this is strongly countered by the Knicks superstar.

With a lot of things about the Knicks that are currently frustrating Anthony, the trade rumor mill spins again, gathering players who are possible trade equivalents to the superstar. Recent rumors suggest Anthony to go to the Cavs in exchange of Tristan Thompson, Kay Felder, Jordan McRae, Iman Shumpert or Channing Frye along with the 2020 first-round draft pick. Some theories also have it that the trade will only happen if Kevin Love will be sent to the Kings in exchange of Anthony. These have not yet been confirmed, but fans are thrilled by the Anthony-James team up that is assumed to take down the excellent lineup of the Warriors.

James has been reported to admit his desire of seeing himself in a team together with Anthony and Wade before he retires. With the king of the Cavs already speaking of his dream, the Anthony trade deal might just be helped by James to become a reality.

Anthony To Join The Bulls?

Anthony seems to be friendlier than ever as talks have it that he might reunite with his pal, Dwyane Wade in the Bulls. The team is currently third in the Western Conference, making it one of the hot targets of Anthony if he ever decides to leave his team.

Reports in October revealed that the Bulls are interested in acquiring Anthony to team him up with former U.S.A. Olympic teammate, D-Wade. The latest trade scenario though for the Bulls and the NY Knicks suggests the former to give up Doug McDermott and Jimmy Butler. However, the Bulls seem unhappy with the deal offer since Butler has been contributing to the good standing of the team as of the moment.

With the team seemingly hesitant to give up Butler, a second scenario was also recently offered to the Bulls. Carmelo Anthony along with a second-round draft pick is said to head to the Bulls in exchange for Doug McDermott, Michael Carter-Williams, Taj Gibson, and the team's two future draft picks.

The second trade deal seem too much for the Bulls to pay, but with Anthony's skills and track record, too much might just be worth it for the franchise owners.

NBA trade rumors surrounding the Sacramento Kings' Demarcus Cousins can come to rest now that a confirmation from the franchise owner himself debunked the speculations. Meanwhile, if even given the chance that a Kings-Celtics trade will take place in the future, experts say that Cousins is not the man that the Celtics will take.

NBA Trade Rumors: DeMarcus Cousins To Lakers, Cavaliers Or Warriors? Is It Time For Hothead To Go?

DeMarcus Cousins has been a constant subject of the latest NBA trade rumors. With the revelation that he is being considered for a trade in the next season, several teams like the Lakers, the Cavaliers, and the Warriors are reportedly picking up the big man.

Numerous players have been the subject of NBA trade rumors that started as soon as last season wrapped up. However, there are five notable players that have been a constant subject of speculations. Find out who these NBA superstars are.