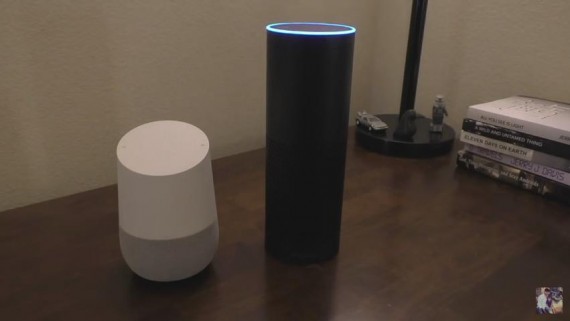 There are few players in the world of smart speakers, but there is definitely no lack in competition. With Google Home and the Amazon Echo leading the pack, is there even a wrong choice? (Photo : GadgetUpdates/YouTube)

The Amazon Echo was the frontrunner in the world of smart speakers before the Google Home was introduced a few months ago. Both devices definitely deliver in their basic uses, but there are a few key differences between them. And with Black Friday coming closer and closer, there are deals on both devices - but which one to take?

As The LA Times notes, holidays deals are vital in the sale of gadgets that the general public is less familiar with, such as the Amazon Echo and Google Home. This is likely because the deals allow individuals or families to experiment without the standard splurge that tech devices generally come with. And because the online retailer is facing its first real competitor this year, Amazon is facing a big hurdle.

"There's clearly some overlap between the Echo and Google Home," Craig Johnson, president of retail consulting firm Consumer Growth Partners, said. "I'm not convinced people have room for both devices in their lives."

Nevertheless, both companies are definitely aware of the stiff competition, if the deals are anything to go by. The publication goes on to note that Best Buy, Target and Walmart are all selling the Google Home for US$99, while the original price is at US$129 - which is almost half of the cost of the Amazon Echo, which sells normally at US$179 and will be discounted anywhere between US$20 - US$40 on Black Friday. Although, the online retailer does also offer the Amazon Echo Dot, which sells for just US$49.99 normally.

But what is price in the midst of stellar specifications? Though Google Home is undoubtedly the more economical choice, how does it actual fair against the original Amazon Echo?

Both devices are smart speakers that listen to requests and answer correspondingly. As noted by ZDNet, the Amazon Echo and Google Home both get their smarts from their respective cloud services. Likewise, their cloud services are within reach via Wi-Fi. They are both generally small as well, considering what kind of power they hold.

The Amazon Echo and Google Home are both able to fetch answers quickly, play music as requested and are also able to report on traffic and such.

But where do they differ? For one thing, the Amazon Echo is not capable of connecting with different gadgets to play music. On the other hand, Google Home can, as long as the user has Google Chromecast.

The real difference is that Google Home can "know" its user because of the widely used Google services. The smart device takes data from different items such as Google Calendar, Google Keep and Google Maps - and correspondingly fixes all the information to make life easier. It also answers questions more fluidly than the Amazon Echo.

On the other hand, the Amazon Echo does have more partnerships with third-party applications, which are called skills. Currently, the device has a list of more than 900 of them. Although, given enough time, Google Home might catch up in this light - the original smart speaker is, after all, already three years old.

The Amazon Echo’s Alexa is changing with the times and providing exactly what users need, when they need it. Moreover, she can offer exclusive deals during this year’s Black Friday and the following holidays.

With Black Friday 2016 just around the corner, it is vital to know what kind of deals are out there - especially for some of the tech world’s popular Microsoft products.