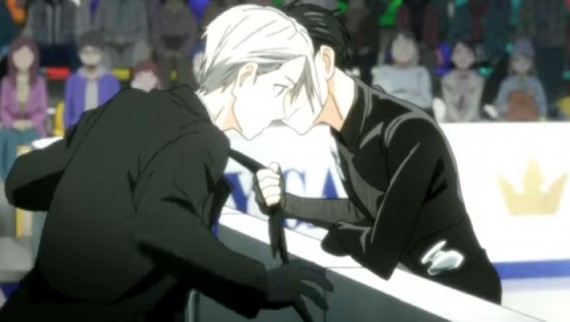 Yuri promised Viktor he will show his "love" to Russia on "Yuri!!! on Ice" episode 8.

Finally, the most awaited showdown between two Yuri's in the Grand Prix Qualifiers is on in "Yuri!!! on Ice" episode 8. Yuri Katsuki beat his personal best and and was ranked second after the short program. However, the two received some bad news from Japan. Viktor needed to go back and asked Yuklov to be Yuri's coach for the free skate.

Yuri Plisetsky (Yurio) met with his grandfather before the competition in "Yuri!!! on Ice" episode 8. He was so happy that he looked so cute. While in the car, he asked his grandfather if he had tried eating katsudon and descibed how delicious it tastes. But when he heard about Viktor in the news, he got annoyed immediately.

In front of the hotel, Viktor was being interviewed by the media. They asked him when he would return to the ice rink but he said he won't say anything about his career until the Grand Prix final. Instead, he told them about his athlete, Yuri, even though nobody was asking and dodged further questions by calling on Yurio.

Two skaters have already advanced in the Grand Prix in "Yuri!!! on Ice" episode 8 -- Otabek Altin from Kazakhstan and Christophe Giacometti from Switzerland whom Yuri faced in the Cup of China. Chris won first place in another event. To qualify for the finals, Yuri had to rank higher than fourth place.

Lee Seung Gil from Korea performed first. He has a detached and cool character like a protagonist in a Korean drama. He danced some mambo which oozes with masculine sex appeal just like Yuri's performance. He failed a triple axel but still earned a personal best of 91.83. He's scary the way he's calculating his scores while performing. Data figure skating? Why not? Next was Emil Nekola  from Czech Republic. We did not see much of his performance but based on the audience's reactions, he did some nice jumps but his performance was quite luckluster. He had a score of 82.43.

Third to perform was Michele Crispino from Italy. He has an extreme sister complex and even did some of Sala's complex combination jumps in his program. He portrayed the song from "Destiny of Knights" like he was trying to protect his twin sister from other men. While skating, he said to himself he wanted to skate with her forever -- I smell some incest here. He scored 89.65 points.

It was so cute how Viktor was checking Yuri's skates before his performance. Yuri promised him he will show his "love" to the whole Russia. He was thinking no one wants him to win because Viktor will go back to being an athlete if he failed to qualify to the finals and made that an inspiration to deliver another perfect eros performance. He earned a standing ovation and a new personal best score of  109.97.

Yurio looked nervous because his grandfather won't be watching him. Yuri and Viktor were surprised with air around him as he coolly said "Out of my way, pig" to Yuri before entering the rink. Yurio was so nervous that he cannot hear anything. Then, he saw Yuri and Viktor and was agitated as Viktor kissed Yuri's skate shoes (These shoes are too lucky, it's already their second one today). Yuri and Viktor cheered for him saying, "Yurio davai!" and "Yurio gamba!" It was so adorable how the two used each other's mother tongue and Yurio got even more annoyed.

Due to his anger, Yurio fell in his first jump but he did the other jumps well. I think this sort of melancholy emotion really suits his agape. The response to his performance was good and he got a score of 98.09. At the end of his performance, a fan threw cat ears headband at him which landed perfectly on his head. Some fangirls screamed, "So cute!," me included. Rather than "Ice Tiger of Russia," I think "Cute Kitten of Russia" is better for him. Also adding to his cuteness is his tsundere tendencies.

Last to perform was Jean-Jacques Leroy of Canada also called JJ. He seemed quite narcissistic and danced to an original composition, "Theme of King JJ." His performance has many mega high jumps and had the audience sing along with the melody. He got 113.56 and was ranked in first place. Yuri was in second place while Yurio was in third.

However, there is an impending problem for Yuri and Viktor. In the last scenes of "Yuri!!! on Ice" episode 8, Yuri's mom called to inform Yuri that Makkachin was in a battle of life and death The poor poodle has buns stuck on his throat and currently at the vet. If we remember, one of the reasons why Yuri failed on the last Grand Prix aside from his nervousness was because his dog, Vicchan, was dying. Yuri decided to tell Viktor about it even though it means he might skate without him in "Yuri!!! on Ice" episode 9.

Yuri urged Viktor to go back to Japan but Viktor just can't let him go to the competition alone. Viktor then saw his former coach, Yuklov, and asked him to be Yuri's coach for the free program on "Yuri!!! on Ice" episode 9, much to everyone's surprise. I'm 99 percent sure Yuklov doesn't want to grant his request. Aside from Yurio, he is the one who was the most angry and shocked when Viktor decided to take time off from the rink to coach Yuri. But the remaining one percent is his curiosity on what his former student saw in Yuri so he might actually coach him.

If that happens, it will be Yuri's first time to perform his free program without Viktor. I hope he would be able to overcome his nerves. In "Yuri!! on Ice" episode 9 preview, we saw sweaty Yuri and Yurio as well as the other skaters but there is no trace of Viktor even in the voice over so he might really be absent during the competition.

After looking over Makkachin, maybe Viktor can go back to Russia for Yuri's performance and make a dramatic entrance just before Yuri is finished (although flight time from Japan to Russia is nine hours or more). I'm expecting more romantic moments when the two reunite again. That kiss on "Yuri!!! on Ice" episode 7 was way out of my imagination. I didn't even realize they really did it before the creator confirmed the truth, so I wish they won't be subtle this time.

'Dr. Slump' protagonist Arale will battle with Goku in "Dragon Ball Super" episode 69 airing on Dec. 4. The Future Trunks arc is expected to end in episode 69 and a new arc will start in episode 71.

'Kuroko's Basketball The Movie: Last Game' To Premiere On March 18 In Japan; To Include Original Episode Written By Fujimaki

"Kuroko's Basketball The Movie: Last Game" will officially be released on March 18, 2017 in Japan. Original series creator Fujimaki will add an episode fans haven't seen yet in the original manga.

"ReLIFE" live action movie with original ending is set to premiere in Japanese theaters in April 2017. Elaiza Ikeda has been cast as Mahiro Takasugi's love interest.

Jon "Bones" Jones has recently announced that he is giving up his UFC title after "not being paid enough" Dana White said that the fighter demands up to $30 million!