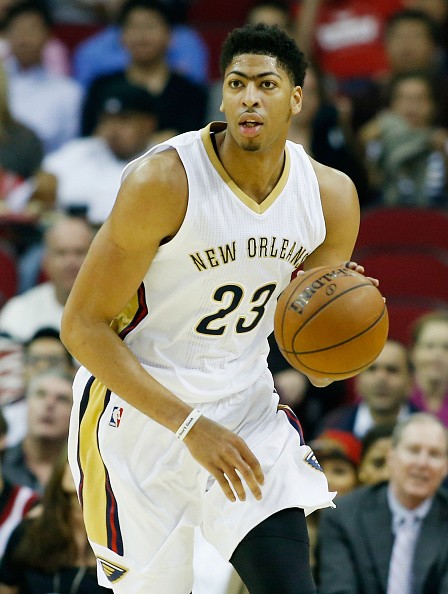 The NBA trade rumor mill is once again spinning and it is the New Orleans Pelicans' Anthony Davis' turn in the hot seat. The three-time NBA All-Star player is performing at his best this season, but his team is seemingly uncooperative. With the Pelicans slumping now in the 12th place -- making only 6 wins against 10 losse -- Davis is speculated to demand for a deal this season and head to either the Chicago Bulls or the Cleveland Cavaliers.

Davis is currently making an average of 31.3 points, 10.7 rebounds, and 2.1 assists this season. The power forward even recorded his career high of 50 points, 16 rebounds, and 7 steals during the Pelicans game against the Denver Nuggets on Oct. 26. However, his stints seem not that relevant when his team is pulling him down from the chance of getting to the finals. Although he is only in the first year of his $145 million five-year contract extension with the Pelicans, the team's underperformance is being speculated to force the 23-year-old player to run to a better team.

Rumors are rife that several teams are interested in getting Davis for a trade such as the Los Angeles Lakers, San Antonio Spurs, and Houston Rockets, among others. However, the Cavaliers and the Bulls are said to be the best contenders in acquiring the star. Who would he probably choose if the rumors become real that he wants out from his team? Let's find that out.

The latest NBA trade rumor suggests that Anthony will join LeBron James in the Cavaliers towards the end of the season. The Cavs are now the first in the Eastern Conference and their chance to hop into the 2016-2017 championship is obviously higher than the Pelicans. The undeniably impeccable talent of Davis in basketball is said to only go to waste if he stays with his current team. Thus, speculations say he might join James and make a more powerful team that can compete with the Clippers and the Warriors in the race to the championship title this season.

Previous reports claimed that the All-Star player is searching for a team that can help his career like the Cavaliers or the Warriors. However, the Warriors are now full of superstar players that he still might need to prove himself worthy to be part of it. Yet with the Cavaliers who are reportedly on the lookout for another big talent, Davis' skills might just be the perfect fit. Furthermore, the play of Davis is more probable to boost the inside defense of Tristan Thompson than any other players who are free for trading.

To get Davis though, the Cavs are said to sacrifice Kevin Love. While it seems impossible to let go of the record-making player in exchange for Davis, recent trade rumors strongly suggest the deal.

Another team reportedly looking to sign Davis is the Bulls. The team already has Jimmy Butler, Rajon Rondo and Dwyane Wade, but to ensure their way to the finals, the Bulls might have to take in another scorer.

The Bulls are not that far behind with 9 wins and 6 losses record. The team is now 6th in the Eastern Conference standing. The Bulls' rising star, Butler, and Davis working together is expected to create a strong tandem that will push the team towards the trophy. Moreover, the flexibility of the Pelicans' star is said to be a good match to the styles of Wade and Rondo, making the four named players a solid competition to other rosters.

It has not yet been specified who the Bulls are willing to let go to acquire Davis, and the Pelicans are keeping mum about the issues hounding their star player. Davis, on the other hand, said that he would rather focus on his team and their performance instead of delving into the rumors that are not yet confirmed.

The Oklahoma City Thunder are rumored to be in need of a scoring piece to boost the team's standing. The Sacramento Kings' small forward, Rudy Gay, is said to be the target of the Thunder, where the veteran player is expected to back up the game strategy of Russell Westbrook.

The game of the Cleveland Cavaliers against the Portland Trail Blazer ended with 137-125 final scores on Wednesday night. The Cavs' PF Kevin Love made an NBA record for most post in any quarter, making 34 points during the first quarter.

The Dallas Mavericks are rumored to be fixing its lineup ready for a trade. The team is speculated to take in DeMarcus Cousins and will also adopt Nikola Vucevic. Furthermore, the team might have to let go of Deron Williams for him to find a better luck with the Cavs. Also, it is said that the Mavs might take Quincy Acy back which the team let go just last Friday.