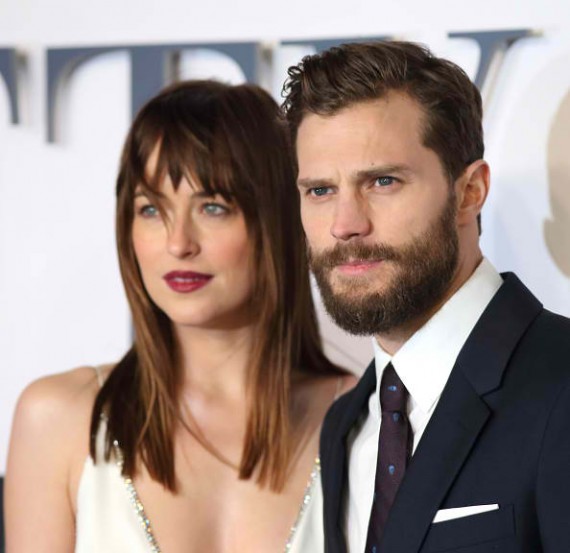 "Fifty Shades Darker" premiere date is still a couple of months away, but its lead stars Jamie Dornan and Dakota Johnson continue to be hounded by endless rumors. From an alleged affair to pregnancy rumors and even an ongoing feud between them, it seems the rumor mill won't stop for the on-screen couple anytime soon.

Apparently, the pair showed a sparkling onscreen chemistry on "Fifty Shades of Grey" that their tandem quickly attracted a zealous fanbase. While it is normal for on-screen couples to attract a lot of fans who will later on speculate on their real-life relationship status, for Dornan and Johnson, this won't work as the actor is already a happily married man. Dornan, 34, and his wife Amelia Warner, 34, have been married for three years now and even share two kids together.

On the other hand, Johnson, 27, may be single now but she has been in serious relationships as well. She previously dated musician Noah Gersh then actor Jordan Masterson. Her latest beau was musician and model Matthew Hitt, with whom she dated for two years. Even before her split with Hitt, the actress had constantly been speculated to be dating her "Fifty Shades of Grey" co-star.

It is not only dating rumors that have hounded the two, however, as recent speculations suggest that Dornan and Johnson have even secretly tied the knot. As if these rumors couldn't get any worse, the actress was even hit by pregnancy rumors. As per reports, Johnson was said to be carrying her first child with Dornan following their secret marriage.

Johnson's pregnancy rumors though remain just that - rumors. While the co-stars' off-screen relationship status has constantly been the subject of speculations, there has never been any positive confirmation from either camp. While anything can be possible in the world of Hollywood, fans should take note that Dornan repeatedly affirmed his commitment to his wife and their kids. Thus, the secret affair and pregnancy rumors are far-fetched for now as the Christian Grey actor already seems contented with his idyllic family life. He together with Warner and their daughters are living in rural England.

"We can see sheep and lambs outside my front door," Dornan said in a previous interview. "I love my life. It's brilliant. I'm surrounded by a household full of girls. It's mad, actually. I wouldn't have it any other way," he added.

As for his alleged feud with Johnson, Dornan's positive statements toward his co-star - though not in a romantic way - should be enough to debunk the rumors. Latest reports even indicated that Dornan and Johnson's strained relationship will affect the filming of "Fifty Shades Freed." Interestingly, the last two installments in the franchise were filmed back-to-back, and the actor himself confirmed that both were already completed.

In the same interview, the "Fifty Shades Darker" actor heaped praises for his female lead. "Dakota and I get along well together," Dornan shared. "Only I know what she's going through, and only she knows what I'm going through. I'm thankful for that and that we have respect for each other - and we're great friends."

Fifty Shades Darker has surprised critics as it surpasses the records of its predecessor, Fifty Shades of Grey.

Psychologists say that Fifty Shades-style sex can greatly boost physical and mental health. Health benefits include lowering of stress levels which could significantly improve quality of health of the couple.

"Fifty Shades" actor, Jamie Dornan, recently addressed the rumors linking him to co-star Dakota Johnson. He made it clear that his marriage with Amelia Warner should not be affected by the talks and that he is only friends with Johnson.