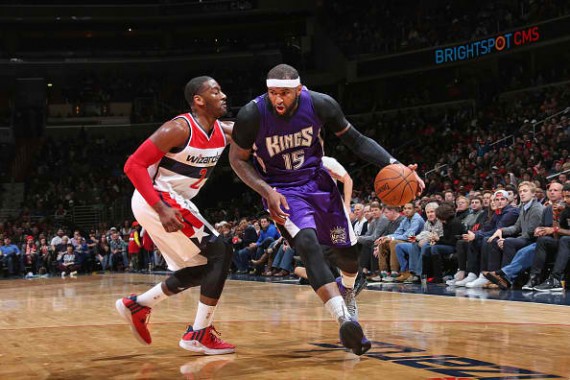 WASHINGTON, DC - MARCH 14: DeMarcus Cousins #15 of the Sacramento Kings handles the ball against John Wall #2 of the Washington Wizards on March 14, 2015 at Verizon Center in Washington, DC. (Photo : Photo by Ned Dishman/NBAE via Getty Images)

The unofficial trade season is about to open on Dec. 15 and NBA trade rumors are again headlining the Sacramento Kings' DeMarcus Cousins. Recent trade scenario suggests that Boogie will head to the Boston Celtics where he gets a chance to reunite with ex-Kentucky teammate, John Wall, who is also rumored to sign with the said team. For the proposition to happen, it is said that a four-team deal should take place including the Nets.

Cousins has been the subject of numerous NBA trade rumors recently, with the latest claiming the Kings' big man might be heading to the Boston Celtics. Despite the previous reports noting that the Celtics' coach Brad Stevens has no plans of taking Cousins in, theories are again looking at the possibility of seeing the 26-year-old player working for the franchise. The more exciting aspect of this deal is the possible reunion of ex-Kentucky players whom we recently discovered are planning of teaming up again.

"We talk about it all the time," Wall said, in reference to teaming up again with Cousins. Boogie, on the other hand, also shared that he imagines himself playing with Wall again which he expressed before the Kings' game against the Wizards on Monday. He clarified though that he wants his ex-teammate to join him in the Kings and not elsewhere.

Cousins is obviously attracting a lot of trade rumors at the moment. His impressive stats are making several teams convinced that he is an ace player that can boost a team's play. The Kings are reportedly convinced of finally moving Cousins out of the circle, while the Celtics are in need of high-caliber players that will give them a shot at the 2016-2017 finals. With the said situation of these teams, making a swap involving Cousins might benefit both franchises.

Wall made headlines last summer following his revelation about current teammate Bradley Beal. He claimed that they are not on the same page when it comes to game strategy and are not on good terms with each other. Theories then have it that one of the players will be released, hence the trade suggestion will be beneficial for the franchise's peace.

The deal that NBA fans want to witness though is quite pricey. It is suggested that four teams will rotate their players in order to make Cousins and Wall's reunion via Celtics possible. The Boston Celtics are then suggested to give up five of their players including Isaiah Thomas, Marcin Gortat, Jaylen Brown, Amir Johnson, Marcus Smart, and a first round pick in exchange of Cousins and Wall.

The Sacramento Kings are continuously dropping in the Western Conference standing and so are the Minnesota Timberwolves. Both teams are now rumored to be on the lookout for players that can improve their rosters, leading both to a trade deal that involves Demarcus Cousins, Rudy Gay from the Kings, and Ricky Rubio and a couple more from the Timberwolves.

The Dallas Mavericks are rumored to be fixing its lineup ready for a trade. The team is speculated to take in DeMarcus Cousins and will also adopt Nikola Vucevic. Furthermore, the team might have to let go of Deron Williams for him to find a better luck with the Cavs. Also, it is said that the Mavs might take Quincy Acy back which the team let go just last Friday.

NBA trade rumors surrounding the Sacramento Kings' Demarcus Cousins can come to rest now that a confirmation from the franchise owner himself debunked the speculations. Meanwhile, if even given the chance that a Kings-Celtics trade will take place in the future, experts say that Cousins is not the man that the Celtics will take.