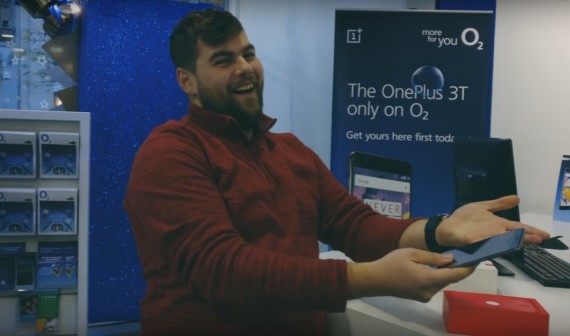 A photo of one of the customers who bought the OnePlus 3T at the London pop-up event with O2. (Photo : OnePlus/YouTube)

Get ready, selfie fans, the OnePlus 3T has been finally released and is said to be able to match the reigning number one selfie phone in the world, the Vivo V5 (which cost only $261). But before we start comparing the two phones, let's discuss first the news regarding the OnePlus 3T.

About the OnePlus 3T

About the OnePlus 3T, the 64 GB inbuilt model is worth Rs. 29,999 ($440) and the 128 GB inbuilt model worth Rs. 34,999 ($514). It is said to be packing with new upgrades such as a 16 MP front camera. Will this device have the same attention like the OnePlus 3 got from the consumers? Let's try to compare it with the Vivo V5 and see if it has potential against the reigning number one selfie phone in the world right now.

Camera. Front and rear camera of the OnePlus 3T are both 16 MP and video is 2160p@30fps and 720p@120fps with Auto HDR. Front camera for the Vivo V5 is 20 MP and the rear camera is 13 MP. This really depends on the user. If the user is more of a selfie person, then the Vivo V5 is the go-to phone. If the user is both a selfie and a person who like to take pictures of his/her surroundings, then the OnePlus 3T is the go-to phone. For me, I'm not really a selfie person, so I'm going to give this to OnePlus 3T.

The tally is OnePlus 3T with 6 wins and the Vivo V5 with 1 win. To be honest, I really thought it was going to be a close match. Well, there you have it, based on my choices, the OnePlus 3T is the better phone.

The OnePlus 3 Android 7.0 update is now available to download as an open beta for all users.

OnePlus 3T: A Review After Less Than A Month Of Its Launch

The OnePlus 3T comes just five months after the OnePlus 3 and it is shaping up to be one of the best smartphones that you can buy today. Base on the company's description, the OnePlus 3T delivers the best user experience, thanks to the latest hardware upgrades and carefully tested software enhancements.

OnePlus is now rolling out a new OxygenOS 3.2.8 software update for the OnePlus 3 smartphone that includes a few new features and bug fixes.