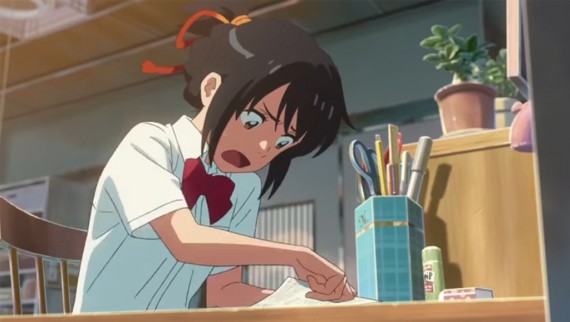 Makoto Shinkai’s latest animated movie has been making headlines since the day it was released. “Your Name”, otherwise called as “Kimi No Na Wa” has been making and breaking records left and right as well. Just recently, the said Japanese movie has made not just one, but three milestones.

“Your Name” has reportedly just become the second highest grossing film of all time in Japan. It has previously broken the box office records of James Cameron’s “Avatar” and Studio Ghibli’s “Ponyo” and “Princess Mononoke”. This all happened in just a span of a couple of months.

And now it seems it has surpassed another one of Hayao Miyazaki’s works. “Your Name” has nabbed the second top spot from Studio Ghibli’s “Howl’s Moving Castle”. The said Makoto Shinkai movie has reached $197.5 million since it was officially released in Japan on Aug. 26. It has already gathered almost 15 million movie admissions all over the world.

Meanwhile, “Howl’s Moving Castle” grossed $190 million in Japan only but made up to $235 million overseas, which made the said Studio Ghibli movie as one of the most successful Japanese films in history in terms of profits. The movie was officially released in Japan back in November 2004 and until this day, it remains a classic that people and avid fans still watch. “Howl’s Moving Castle” sets in a story revolving around a cursed young girl who makes hats and a handsome wizard, named Howl, who roams around the world with his castle.

Makoto Shinkai’s movie has not just made history in Japan’s film history. As a matter of fact, it has been recently reported that “Your Name” has even made a remarkable record in the box office records of China. The movie has actually surpassed J.K. Rowling’s “Fantastic Beasts And Where To Find Them”, which was produced by Warner Bros. Apparently, “Your Name” was just released in China as well in other countries on Dec. 2.

On the few days after its release in China, it immediately became a smash it after making a successful opening in the said country. The movie opened with an astounding $11 million, putting “Fantastic Beasts and Where To Find Them” and “Miss Peregrine’s Home for Peculiar Children” to lower spots. The anime film had a similar opening blast as Walt Disney's “Moana”, which miraculously survived a quiet Thanksgiving release and even created history itself.

With all the box office record hits “Your Name” is reaching, it is not strange at all that it is gaining attention from critics as well. With all the noise it has been making, it has earned several various nominations since it was released. On Dec. 4, the 2016 Los Angeles Film Critics Associated Awards have rewarded the Best Animation or Best Animated Film to “Your Name”. The foreign animated film, “The Red Turtle”, which was released in Cannes in May 2016, shared the award with Makoto Shinkai’s hit film as a runner-up.

“Your Name” has added another award under its belt. It has already won other Best Animation awards from various awards ceremony but it has received the Arigato Award from Tokyo International Film Festival and Best Picture at the7th Newtype Anime Awards. “Your Name” is currently still showing in Japan and has just been released in China and other countries.

A new trailer of "Your Name" has been released for international screening while Makoto Shinkai addresses being compared to Hayao Miyazaki as he is awarded "Hit Make of the Year 2016".

"Harry Potter" writer, J.K. Rowling has finally announced that she has finished writing the script for the sequel of "Fantastic Beasts and Where to Find Them".

Makoto Shinkai's 'Your Name' Review: An Animated Movie That Moved Time And Hearts; Reasons Why It Deserved The Attention

A review on the highly acclaimed animated movie by Makoto Shinkai, "Your Name", also known as "Kimi No Na Wa". Few spoilers ahead but not enough to ruin the movie.