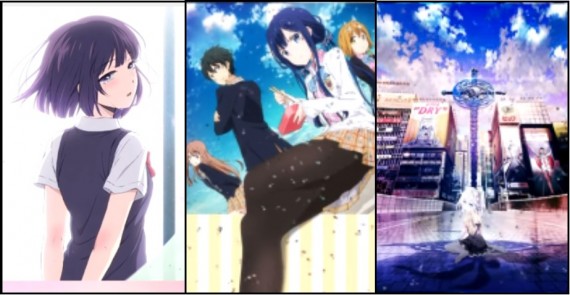 Among upcoming anime series this January 2017 are (from left) Kuzu no Honkai, Masamune-kun no Revenge and Hand Shakers (Photo : Absolute Swords/YouTube)

The upcoming 2017 is an explosive year for anime lovers as we wait for exciting anime sequels and manga adaptations including "Attack on Titan" season 2 and "One Punch Man" season 2. Here are some suggestions for the first batch of anime series premiering in January.

It follows the story of Masamune who was always teased by a girl, Aki, as a kid because he was fat. To take his revenge, he starts a rigorous diet to improve his appearance and several years later, he becomes the perfect prince -- with good grades, handsome face and good athletic abilities.

He transfers to Aki's school but his revenge with the so-called "Brutal Princess" might be a different kind of sweet. The anime is based on a manga series of the same name created by Hazuki Takeoka.

The tech lover who is always glued to his smartphone meets the girl who doesn't even have a phone. Yuu Haruna is a teenage boy who suddenly transferred schools while Fuuka Akitsuki is an aspiring singer. Yuu gets reconnected to his childhood friend, Koyuki Hinashi who is now a popular singer. He invites Fuuka to Koyuki's concert and a love triangle ensues.

"Fuuka" is somehow a sequel to Koji Seo's another manga, "Suzuka." Fuuka is the daughter of athletes Yamato and Suzuka who are the main protagonists in "Suzuka." The "Fuuka" manga mentioned that Yamato became an Olympic medalist in track and field but the story itself is independent from "Suzuka."

Here comes the scariest loli in anime land! She has blonde hair, blue eyes and porcelain white skin but opposite to her cute appearance, Tanya Degurechaff is a commander of an army who mercilessly strikes down any opponent. She is one of the most dangerous persons in the Imperial Army!

"Youjo Senki," meaning "The Military Chronicles of a Little Girl," is adapted from a light novel series written by Carlo Zen and illustrated by Shinobu Shinotsuki. Tanya was one of Japan's elite office workers but was reborn as a little girl after angering a god.

Hand Shakers are two people who join hands and bear weapons together in one's psyche called Nimrod. This follows the story of Tazuna, a student who is talented in mechanics. He visits a research institute to do a request and meets a girl called Koyori. Tazuna touches the girl's fingertips and the two are sent to another world, Ziggurat.

Upon arriving to Ziggurat, the two were attacked right away. Hand Shakers fight against each other to reach the top where they can meet and defeat a so-called god which will grant their wish.

Can true love bloom from a twisted relationship? Hanabi and Mugi are envied by their classmates. They are the so-called perfect couple with good looks and high grades but the two share a secret, they both have a one-sided love with a person they can't have.

Hanabi loves their homeroom teacher who thinks of her as a younger sister while Mugi loves another teacher who is his former tutor. The two sought comfort and physical relationship but promised not to fall in love with each other.

Other anime series which will premiere in January 2017 include sequels like "Blue Exorcist" season 2, "Yowamushi Pedal: New Generation," "Tales of Zestiria the X" season 2 and more. You can read the details here.

'Kekkai Sensen' Season 2 Announced; 'Kekkai Sensen & Beyond' To Be Released In 2017 With New Director And Scriptwriter

Leonardo Watch will be back for "Kekkai Sensen" season 2 in 2017. Former director and scriptwriter will be replaced by Shigehito Takayanagi and Yasuko Kamo from "Dagashi Kashi."

Fans might not see Fuuka's death in the 12-episode anime adaptation. The series has been adding more drama in the story and there are speculations it will deviate from the manga. Fuuka died after getting hit by a truck in the original manga.