Things You Should Know About The Oculus Touch Controllers 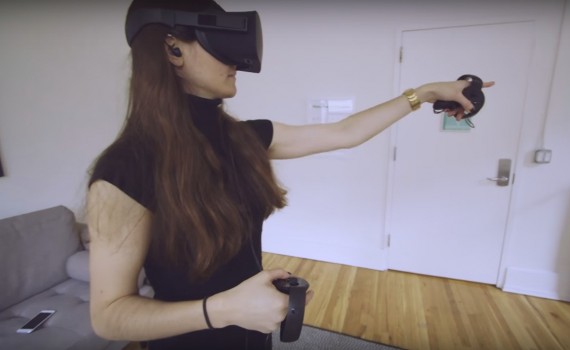 Facebook takes down about 200 of the 500 pop-up Oculus Rift demo stations in the United States. (Photo : The Verge/YouTube)

Christmas is coming and you're having a headache about what cool gadget you want to buy. A new Smartphone perhaps? A Laptop? How about something that is hot in the tech market right now, the Oculus Rift with its newly launched Touch controllers? Here are the things you need to know about it (links for the video sources will be provided at the end of the title):

About The Oculus Rift and Touch Controller

When the Oculus Rift was launched, people felt like its features were underwhelming compared to the HTC Vibe and PlayStation VR that both highlighted the Rift's limited lacking motion when interacting with virtual objects and environment. Fast forward to the future, Oculus has launched a new controller, the Touch controllers which is priced around $199 and is currently labeled to be the best hand-tracked controllers around for VR. About the price tag of the Oculus

About Its In-game Features

One thing you will first notice when using the Touch controllers inside the game is its greater sense of control over your in-game hands. To grab something, you just have to hold button where your index finger rests. In gun games, you can grab a gun by holding the button where your middle finger rests and press the index finger button to pull the trigger. Also, the Touch controller is capable of knowing when you're pressing or just resting your thumbs on the buttons located on top of the controller.

Lastly, another cool in-game feature that many users like is the ability to make a thumbs-up inside the game. To do this, you just need to lift your thumb and hold both triggers (index and middle button). Though it may sound like something so irrelevant, to Virtual Reality enthusiasts, this is a big step towards having fully articulated virtual fingers in virtual reality.

The connectivity between the Oculus Rift and Touch controllers is simple, easy and clean. The controllers are wirelessly synced directly to the Rift headset, which means it doesn't have the need to occupy another USB port. However, the flip side of this is that you will not be able to use the Touch Controllers in any other VR headset.

About Its Box Set

When you buy the box set for the Oculus Rift, you only get one Rift Sensor. As for the box set of the Oculus Touch controllers, it comes with its own Rift sensor to improve the Oculus VR experience. Though this is a sin, the two Rift sensors are very necessary, because this gives you to have a lot of extra space where you can side-step, crouch, and do other things without having the need to worry that the Rift sensor might not sense it. About the setting up the second Rift sensor, it only takes less than 10 minutes.

About The Design Of The Touch Controllers

The thing that makes the Touch controllers great is that it feels very well-built. You will also notice that it is half the size of the Vibe's controller. About the Touch controller's durability, it is dense and solid enough that even its tracking ring (the thing that encircles the hands), barely flexes or gets scratched when accidentally dropped or bumped. Of course, it is another story if you really want to get it scratched or any form of damage.

About The Battery Performance Of The Touch Controllers

According to one of the video sources that I used, even though a week has already passed with moderate use of the Touch controllers, both batteries still indicated that it is still fully charged. In the same video, when the user opened the battery casing (which is magnetically held in place), the battery was a single double A battery on each controller. For its battery performance based on this video, I would say it performs quite well.

About Its Tracking Performance

The tracking performance of the Touch controllers is said to be excellent and faced only few minor glitches. It is even pretty accurate enough to do some complicated stuffs featured in Medium and Quill. There are similar to Google's Tilt Brush.

The OTHER Negative Thing

Aside from its separate deal, the other aspect that the Touch Controller suffers is its 180 degree blind spot. In one of the video source, the user faced so many situations where he had to turn at his back to shoot an enemy or pick up something, making the Touch Controllers not function. However, to solve this, Oculus is offering the users to buy an extra Rift sensor worth $79. Yeah, you're going to need three Rift Sensors to have the full 360 degree coverage.

Overall, the in-game performance of the Touch Controllers is so great that it makes the Oculus Rift worth buying this December. However, the need to buy a third Rift Sensor does not sit well with me. To me, it's like buying a 4 wheeled car with one tire lacking. But still, one could say that the Oculus Touch Controllers are the best hand-tracked controllers around for VR which is something tech enthusiasts should not pass by, given that Virtual Reality is currently the new genre and is only going to get bigger in 2017.

The Oculus Rift is currently selling in Amazon for $599 with a free $100 gift card for a limited time. Sales for the VR headset is expected to increase as the Oculus Touch controllers have already rolled out.

The year 2016 has been the year where we have witnessed the outbursts of a lot of virtual reality headsets such as the Sony PlayStation VR, HTC Vive, Oculus Rift, and Google Daydream. Although all the mentioned headsets are meant to offer a great VR experience, there are actually some differences between these various VR headgears. In this head to head comparison post, we compare one of the pioneers of VR, the Oculus Rift, against one of the newcomers, the Google Daydream.

The goal of the new startup game studio will be to abandon the crunch and toxic culture pervasive in game studios behind and make one that's "collaborative, anti-crunch, diverse and inclusive."

Wondering Which Game Controller Fits Your Android TV Best? Check Out This List For A Selection Of The Finest Ones Available On Amazon!