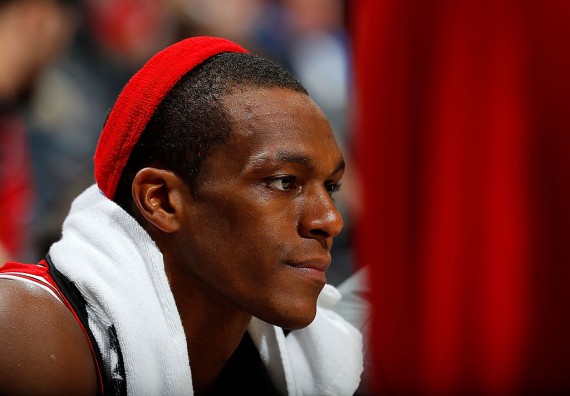 ATLANTA, GA - NOVEMBER 09: Rajon Rondo #9 of the Chicago Bulls looks on from the bench in the final minutes of their 115-107 loss to the Atlanta Hawks at Philips Arena on November 9, 2016 in Atlanta, Georgia. (Photo : Photo by Kevin C. Cox/Getty Images)

“I’m OK with where I am in my life and what I bring to this team.’’

That’s Rajon Rondo speaking out his heart’s content and confidence.

The veteran point guard is unmindful of any issues thrown at him. Any punch on his personal life and playing career won’t hurt as bad as it can because he’s not an active social media person. In fact, he refused to have one.

“I don’t really read the papers. I don’t have Instagram or social media, so whatever you guys write, good luck with what you’re writing. I’m going to continue to work as hard as I can to be the best player for this team and try to lead the right way,” Rondo said.

Having revealed his reservations, can one judge him as NBA’s bad guy? Come on, he’s just being honest.

His negative reputation resurfaced in the web following his emotional conflict with associate head coach Jim Boylen during after Saturday’s loss to the Mavericks. A source said that Rondo threw a towel in the direction of Boylen during the game and lashed out with the management staff.

Indeed, that night was filled with commotion for Chicago Bulls. With a score of 82 against the Mavericks’ 107 and Rondo’s poor performance of 2 points and 2 assists, what more can be done?

As a result, he was suspended for one game. Next is Rondo’s alleged apology to the staff and his teammates. His sincere remorse did not fail some of the big guys in the league but to many, he’s still tied with negative views.

“We’ve moved past it. It’s something where we’re not going to talk about the details of it. We’re focused on this game tonight,” coach Fred Hoiberg said.

The four-time NBA All-Star is reportedly resetting his image when he moved to the Bulls. To recall, he had a heated verbal exchange with coach Rick Carlisle. When he played for the Dallas Mavericks, he doubted their game management. Last season, he got involved in an uncomfortable alliance with George Karl.

So when will the big change commence? Jimmy Butler got the answer. He slammed the ugly criticisms against Rondo and said they were false.

“I don’t feel his reputation fits him at all. Rondo’s an incredible basketball player, friend, brother to me now, to us. I think we love him here. I think the fans love him as well, the organization, I think everyone has nothing but great things to say about him. I don’t see where that reputation came from at all.” Butler clarified.

Remember, Rondo is one of the Bull’s giants inside the court. Aside from last year’s NBA Most Improved Player Butler joining him in the powerful lineup, three-time NBA champion Dwyane Wade, and big man Robin Lopez got their backs.

Rondo is indeed a monster. Not just your idea of a villain.

The Chicago Bulls are in the process of courting Kevin Love for a trade with Tony Snell and Nikola Mirotic. However, the Cavaliers dismissed the idea of any trade from their league.

After months of speculations, the Milwaukee Bucks and Chicago Bulls have finally reached an agreement of trading Michael Carter-Williams for Tony Snell. The deal is expected to be officially signed by both leagues on Monday.

NBA Playoffs: Boston Celtics Declared As The Worst No. 1 Seed In Playoffs History

The NBA Playoffs started with some few upsets but none bigger than the struggling Boston Celtics. Various sports analysts have called out the Celtics stating that they are the worst number 1 seed in playoff history.

The first round of matches of the series just capped off after Houston Rockets won, finally revealing the first set of results. Meanwhile, Isaiah Thomas shows off his tenacity to play despite going through a time of mourning.

No player is safe when it comes to being traded. Just asked DeMarcus Cousins who is a franchise player before from the Sacramento Kings. Right now, multiple All Stars are involved in the trading block and four of them are very ideal to exchange places.

It seems the Chicago Bulls are letting go of Jimmy Butler. Other NBA trade rumors are suggesting that Carmelo Anthony is now ready to be traded.