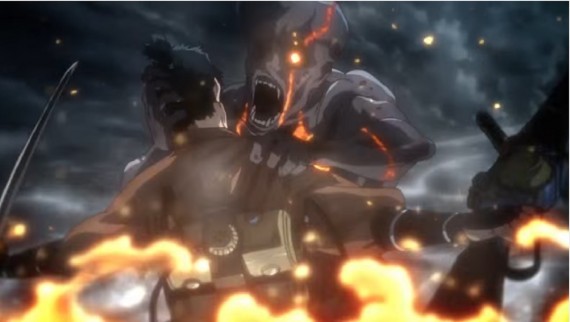 "Kabaneri of the Iron Fortress" is steampunk survival action series set in post-apocalyptic period just like "Attack on Titan." The story takes place in an island country called Hinomoto. Instead of walls, the people hide themselves in fortresses called stations, and instead of titans, they are attacked by zombie-like beings called Kabane.

The first season was all about destruction as the humans fought among themselves amid the threat of another race that can make humans go extinct. It followed Ikoma, a young engineer who was bit by a Kabane. He managed to stop his transformation by blocking his carotid arteries and became a Kabaneri -- a human and Kabane hybrid. Together with Mumei and other human survivors, Ikoma boarded on the Kōtetsujō (Iron Fortress) station to seek shelter while fighting groups of Kabane along the way.

The series is an original anime so there are no clues on how "Kabaneri of the Iron Fortress" season 2 will proceed. The main villain in the first season was Biba Amatori, the Shogun's son and Mumei's brother who was seeking revenge on his father due to a betrayal years ago. He introduced himself as the leader of the Hunters, a group which eradicates Kabane. However, he has a twisted personality and actually utilizes the Kabane for his own goals.

Biba supposedly died in "Kabaneri of the Iron Fortress" season 1 but his existence means there might also be other people who can utilize the Kabane, so there might be new villains on the way for the sequel. The origins of the Kabane are also yet to be explained (the protagonists only know that they resulted from a virus) so "Kabaneri of the Iron Fortress" season 2 might feature a bit of a backstory of how the apocalyptic world came to be.

"Kabaneri of the Iron Fortress" season 1 aired from April 7 to July 1, 2016. It was streamed worldwide via Amazon Prime Video. The series will also be released in English dub by Crunchyroll and Funimation via Blu-ray and DVD in North America. The said two-part film will be released in Japanese theaters on Dec. 31 and Jan. 7, 2017. Meanwhile, there is no exact release date for the drama CD and "Kabaneri of the Iron Fortress" season 2 yet.

Shoujo manga fans will definitely need to mark these dates! Here are upcoming live-action movies inspired by shoujo mangas to be released in 2017.