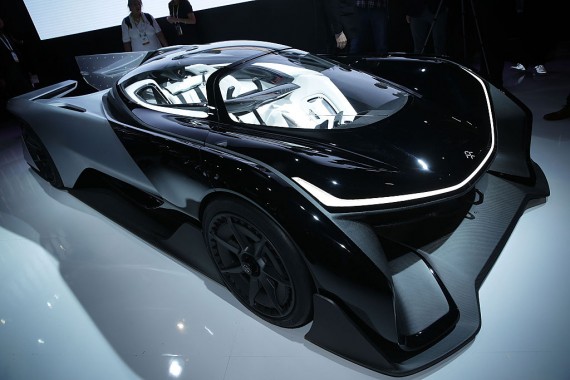 Startup Tech Company, Faraday Future’s future may not be looking so bright as various suppliers sue the company over unpaid debt. The electric car company may need to rethink their strategy to survive the industry. (Photo : Photo by Alex Wong/Getty Images)

Faraday Future may seem to have missed on paying their debts. And by some, we mean a lot, like "millions of dollars" lot. It seems that the startup tech company may have bitten more than they can chew when they decided to rival successful companies such as Tesla Motors in manufacturing cars. Although the company has a multitude of detractors, there are still some that believe in the company and continue to give them hope and support.

$7 Million Dollars Behind For Just One Supplier

One of Faraday Futures major supplier, Futuris, has just sued the tech company over an alleged $10 million dollars in debt. Futuris stated that Faraday Future is more than 30days late for a $7 million dollar payment. Although many do not know Futuris, the company develops interior and seating components for Chinese manufacturers and major car brands like Ford, Toyota, and General Motors.

Faraday Future is also suffering from a second lawsuit that involves a warehouse owner in Southern California. The owner sued Faraday Future over a $100 thousand dollar claim of missed payments. If that is not yet enough, several reports from October also mentions that the company is already more than $46 million dollars behind in making construction payments to contractor AECOM. According to Buzzfeed News, they have received information from ex-employees and several documents that have been acquired which authenticate claims of more than $300 million dollars in debt, most coming from missed payments.

There Is Still Hope, And Supporters

Fortunately for Faraday Future, they still have major backers and supporters with big names. One notable supporter is Nevada's own governor, Brian Sandoval. The governor issued a statement earlier this month that directly points to the state treasurer, Dan Schwartz, who is a major detractor of Faraday Future. "It's unclear whether or not the Treasurer has read the legislation or understands the agreement between Nevada and Faraday Future, but the state and taxpayers are fully protected should Faraday not meet its $1 billion investment," said Sandoval during the speech on December 1.

In an earlier conversation with the state treasurer, Schwartz stated, "I think Mr. Jia built a bridge too far," pertaining to Jia Yueting, Faraday Future's primary investor. Sandoval countered that statement and said, "We fully vetted the project, its financing, and pursued the opportunity. The state continues to communicate with Faraday and the company has spent more than $100 million in development related to the site, which includes payments to local businesses and contractors." These are strong words from the governor and people who voted him can only hope that he is true to his words in supporting the tech company.

Faraday Future Needs To Prove If They Are Worth Keeping

Faraday Future reiterated that the factory will be built, cars would be produced, and all the bills will be paid. However, that statement is still failing to give the boost of confidence that its supporters need. Thankfully, Faraday Future have men such as Governor Sandoval to give hope to the company, they can simply repay that by giving it all they have, and of course, pay their dues.

Japanese company, Takata, is in deeper trouble as more car brands are added to the list of defective airbags that has caused at least 16 fatalities worldwide. Among the car brands are McLaren and Ferrari.

Tesla Versus Faraday Future: Who Will Win In A Race And Why

New electric car startup company, Faraday Future, shows a teaser video of their first ever car to be made for production. The car will be unveiled at the CES 2017 in January 2017.

Tesla has started the trend with high performing electric vehicles with their Model S. Startup companies like Lucid Motors is set to follow suit as they manufacture a 1000hp electric sedan.

Faraday Future FF91 Challenges Tesla Model 3; How Is It Different From Other Electric Cars?

The awaited Faraday Future FF91 has been seen displayed at an auto show, revealing how it can actually challenge the upcoming Tesla Model 3.

Faraday Future Scales Back EV Roster: A Look At Its Future

When Faraday Future first made its goals known to the public, the company was dubbed “The Tesla Killer.” That potential, however, may have simmered down a little as its official roster diminished significantly.