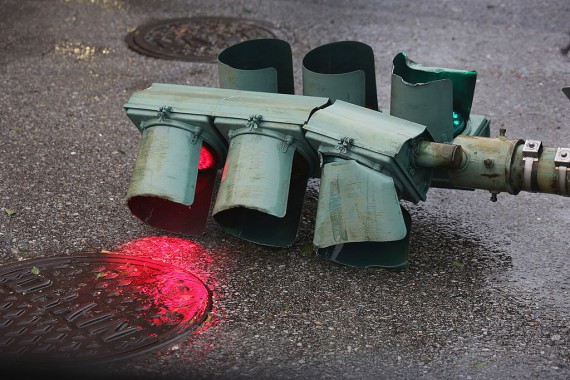 Uber, who recently started rolling out driverless car services in San Francisco, was just caught by camera beating the red light. The dashcam that recorded the incident came from a Luxor taxi, a competitor of Uber. (Photo : Photo by John Moore/Getty Images)

Uber has recently started rolling out a fleet of driverless cars for their ride-hailing services in an attempt to make the road a safer place for both the occupant and other road users. However, the opposite just happened as one of their driverless cars was recorded on camera committing a serious traffic violation that could have had caused a fatal injury. The driverless vehicle was seen beating the red light in a busy street in San Francisco, and this happened on the first day of deployment in the area.

Department Of Motor Vehicle Versus Uber

California's Department of Motor Vehicle is now demanding Uber to stop its ride-hailing services in San Francisco right away. The department of Motor vehicle also sent Uber a letter saying that the deployment of the autonomous Volvo luxury sports utility vehicles was illegal since they did not have any of the special permit required to operate self-driving vehicles on public roads.

Uber Denies The Need For Additional Testing, Blames Error On The Driver

However, Volvos equipped with cameras, sensors and lidars can still be seen operating in public San Francisco roads. Uber did not respond to the threats from the state's Department of Motor Vehicle. DMV Chief Counsel Brian Soublet stated "If Uber does not confirm immediately that it will stop its launch and seek a testing permit, DMV will initiate legal action," and that there is a probability of the incident going to court.

An Uber spokesperson finally spoke up, blaming the incident to the drivers that were behind the wheel of the Volvo sports utility vehicles. Uber stated that the error was not cause by the vehicles self-driving computer but was caused by human error. Uber has already suspended the drivers after the traffic violation incident.

Uber, still refuses to the departments demands and mentioned that there is no need for any additional testing of their autonomous vehicles. The ride-hailing company said that the testing is not applicable to them as there are still human intervention involved and physical human beings behind the wheel of their vehicles. The DMV director answered through a letter saying that 20 other companies have already been approved to testing their self-driving vehicles and said "they are obeying the law and are responsibly testing and advancing their technology, This technology holds the promise of true safety benefits on our roadways, but must be tested responsibly."

Aside from Uber, BMW have started a similar ride-hailing service named "ReachNow". Self-driving cars from BMW are being tested in Munich and are preparing to take on other ride-hailing services like Car2Go, ZipCar, Lyft, and of course, Uber. The advantage of BMW is that they are the exclusive owners of the self-driving cars that will be put up to the ride-hailing services, unlike Uber who still need to buy their vehicles. That gives BMW a big advantage when it comes to profitability and leaves Uber trailing behind. Uber may need to comply with state law and demand to avoid getting unnecessary fines in case their denial of testing goes to court.

General Motors is now stepping to the autonomous car industry like its many competitors. With the success of the Chevy Bolt EV, they may be on their way to set another trend in the industry.

Tesla Motors Update: Supercharger Idle Fee To Be Implemented For Owners Who Leave Their Cars Idling

A few months ago, Tesla has announced that their supercharger network will no longer be free for most of its electric car models, now, cars who idle while charging will be also be fined.

Postmates is Down! Ubereats and Doordash Reported Down As Well: What Happened?

Just recently, the Postmates app, as well as the website, stopped working and a lot of citizens are now concerned because of their reliance on this service. Ubereats and Doordash are reported down as well.